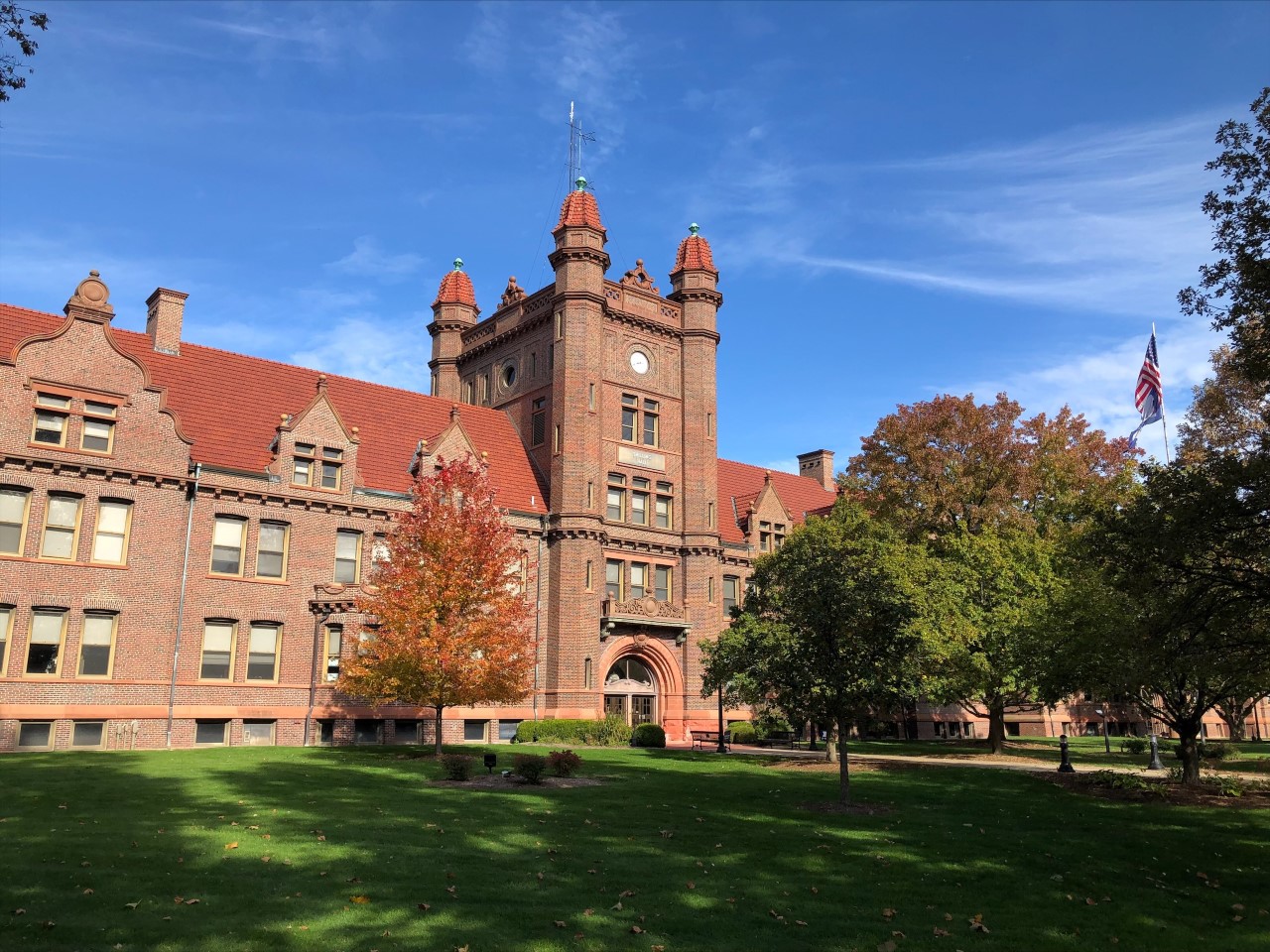 Warning: This article contains discussions of sexual assault, pregnancy, miscarriage, and bullying that might be upsetting to some people.

Freshman Victoria Karmas didn’t know she was pregnant when, five weeks after she says she was sexually assaulted multiple times by a Sigma Alpha Epsilon member—which led to her pregnancy—she says she was raped again by a member of Tau Kappa Epsilon.

A few weeks after the assaults and a miscarriage, Karmas has decided to share her story. She posted an essay, titled “My Experience As a First-Year Student at Millikin University,” on medium.com on Nov. 15, 2021. The post is starting conversations about sexual misconduct on campus.

On Nov. 19, Vice President Raphaella Prange sent an email to the student body detailing changes to how Greek Life operates on campus. This email came after conversations sparked by Karmas’s article.

“It has been clear that while many members of our fraternal groups promote proper bystander intervention and survivor advocacy, Millikin has not yet seen the expected environmental change at the chapter/organizational level,” Prange wrote. “Our student body has been asking us to do more. We aim to do more. It has become clear that our fraternal organizations are not leading values-based or inclusive experiences.”

Prange’s email announced that Millikin’s fraternities and sororities are officially on notice, meaning there are no guests allowed at fraternity or sorority houses. She extended her email to ask that students across campus avoid situations where alcohol is central to the gathering, and she encouraged students to engage with events sponsored by Millikin instead.

“The current environments being facilitated within these unsanctioned events are simply not healthy or safe and detract from the Millikin experience,” Prange wrote. “Students who decide to engage in or host events that violate our alcohol or event policies are subject to swift student conduct sanctioning up to and including suspension from Millikin.”

While the university is investigating these sexual misconduct cases and working to respond to students, Karmas has been absorbing the response to her Medium post.

“I posted it to just, like, get my truth out, to have people know the real story, whether they believed me or not,” Karmas said.

Karmas decided to write the post after a hard night at Vespers rehearsal. She said she has been struggling with her mental health and schoolwork since the assaults, and a friend suggested that she might feel better if she shared her story.

When Karmas posted the essay to Medium at 3a.m. on Nov. 15, she didn’t expect many people to read it. But by the time she woke up, it already had over 100 views and counting.

The response has been more than Karmas could have imagined.

“I started receiving paragraphs from people thanking me for sharing and everything, telling me their stories and how they’re afraid to speak up and everything,” Karmas said. “And I told them how I’ve talked to some alumni who have told me that these fraternities have been getting away with this for many years…And that disgusted me and made me want to share my story even more.”

Karmas said she reported both assaults to Millikin in the days after they happened. When reporting sexual misconduct on campus, the survivor can choose whether or not to proceed with a student conduct hearing or police report. If they pursue a conduct hearing, Millikin will decide if the accused student is “responsible” or “not responsible” for a violation of the student handbook. Consequences are decided from there.

“While Millikin cannot and does not seek to mimic the criminal justice system, we support students in filing police reports and receiving off-campus supports…Our process is founded in restorative justice,” Prange wrote in another email. “We work arduously to ensure survivors can continue to realize their academic goals at Millikin. These services and approach mostly happen in private with survivors, and campus at large may not be privy to these items, but our goal is to make sure we continue to support all survivors and hold respondents accountable to misconduct.”

After reporting the assaults by the SAE member, Karmas was granted a no-contact order, which Karmas said the SAE member broke. The two students then participated in a mediation, which is a conversation between the students overseen by a faculty member in which the students work to find a path to move forward.

When Karmas reported the assault by the TKE member, the TKE member pleaded “responsible” to a violation of the student handbook and asked not to proceed with a student conduct hearing.

Karmas also reported the second assault to the Decatur Police Department, and a witness gave a statement to the police on her behalf. On Nov. 16, Detective James Webber met with Macon County State’s Attorney Scott Rueter. Rueter’s office decided not to charge the TKE member.

On Nov. 17, TKE released an online statement that explained their decision to revoke the membership of the TKE member who is involved in this case.

“As a fraternity, we do not condone sexual misconduct in any form, especially from our members,” the statement read. “As the investigation continues, we have decided that this individual does not align with our values and have revoked his membership in TKE…We will continue to hold members accountable when their actions don’t align with our values.”

While the presidents of both SAE and TKE declined to comment for this article, their fraternities have been cooperative with the university throughout the investigations. The problem of sexual assault on college campuses goes beyond Greek Life.

Since reporting the assaults and prior to TKE’s statement, Karmas said she has faced backlash from some SAE and TKE members who say she has accused more men of sexual assault for attention. She said that these rumors are untrue and have spread throughout campus.

“People have basically turned their backs towards me and talk about me behind my back,” Karmas said. “I felt uncomfortable to go to class and to the caf to eat, because I would always get stared at when I sit alone and everything. The fraternities have been calling me a liar, that I’m just a girl that cried wolf…It’s such a small campus that almost everyone was against me.”

In the past few days, the Medium article has changed some of this.

“It did feel weird for a second, because I walked out and no one was staring at me,” Karmas said. A few people have also apologized to her and thanked her for posting her story. “It made me feel actually great that I was standing up for not only myself but those who don’t want to.”

As the post gains traction online, Karmas hopes that her story will help other people stay safe. The post has been viewed over a thousand times as of this writing. While Karmas said she has received more backlash from some Millikin students since her post, she stands by her decision to share her story, especially as more people come forward with their own stories and support.

“I started crying every time I received a message,” Karmas said. “Like, feeling loved and cared for for the first time in the past four or five months I’ve been here on campus. And receiving all this love and care of people finally believing me and realizing that they shouldn’t have believed them in the first place, and realizing that they don’t want to walk around afraid, they want to walk around feeling free and like they’re not going to get lured into a trap.”

Karmas wants her story to lead to a bigger, university-wide change when it comes to sexual misconduct at Millikin. The article and Prange’s campus-wide email have started many conversations about sexual assault on college campuses.

“Reporting has increased as survivors feel more empowered under the new [Biden] administration,” Prange said. “I want to continue to support increased reporting. While an increase in reports can be unsettling, reporting also allows us to more effectively and specifically address behaviors and misconduct.”

She believes that everyone at Millikin has a responsibility to keep each other safe.

“As the Deputy Title IX coordinator, I am observing an increase in new students not having previous experience with alcohol and intimacy due to remote high school environments and the COVID-19 pandemic, and returning students are not conducting themselves according to Millikin’s standards,” Prange wrote. “Our returning students have an ethical duty to support our newest students and assist them in engaging in a positive Millikin experience. I hope our returning students reading this will hear this as a call to reconsider how they are engaging with others and hold themselves to a higher standard of conduct.”

Prange also says that Millikin will be increasing training regarding alcohol and consent, and student groups will likely need to complete more training before they are cleared to host events. She hopes that these conversations will encourage bystander intervention and a greater understanding of consent.

“We encourage all survivors of sexual misconduct to come forward,” Prange wrote. “Millikin University wants to support you. We believe you. The University’s priority is to work alongside the student body to stop the creation of environments that may lead to this misconduct. However, we need the support and assistance of the student body and student leaders of our organizations…It is going to take all of us—our students, faculty and staff—to promote healthy social environments. But, the first step will be to stop engaging in those environments and activities that directly serve to create exclusion, harm, and irresponsibility.”

As the semester continues, Karmas and other students hope to see positive change.

“The fact that it’s happening as a freshman, it hurts so much,” Karmas said. “I thought guys here would be different, but that’s what they do. They pretend to be what you’re looking for, just to lure you in…That was the point of my article, to get some type of attention and people to finally realize that something needs to be done. Especially if a first-year student is having to do this, you know something is wrong with the university.”

If you or someone you know needs support, you can call the National Sexual Assault Hotline at 1-800-656-4673. There are also resources on campus and in the Decatur community, including the Growing Strong Sexual Assault Center and Heritage Behavioral Health Center.