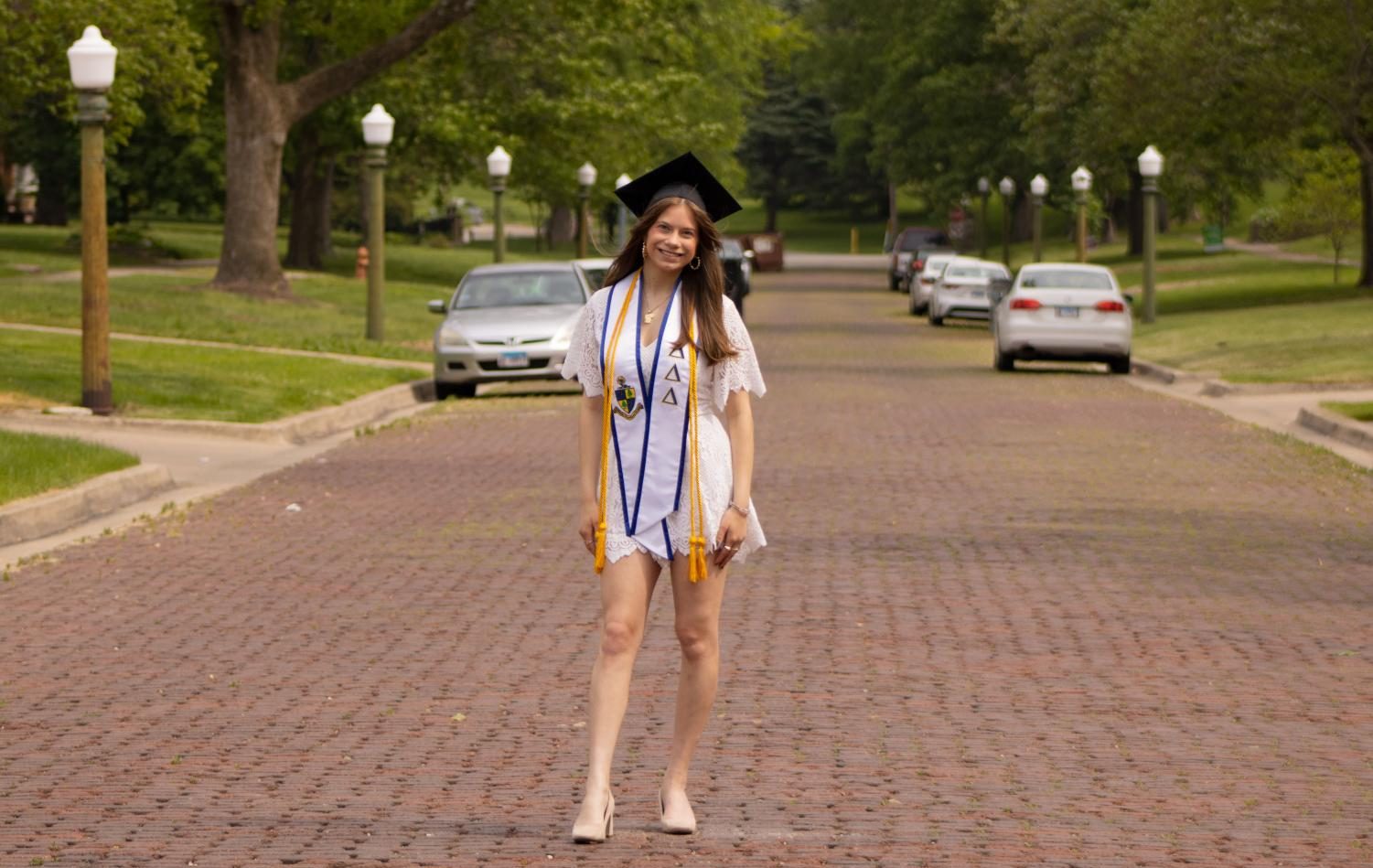 Jeana Pierson Has Found Her Path

Decaturian Editor-in-Chief Jeana Pierson has always had a plan: Get good grades, graduate from Millikin, go to law school, become a fantastic lawyer.

She never expected the things that would come up along the way. Between great opportunities, amazing friends and some impressive accomplishments, Pierson is excited to start law school in the fall, but she’s finding it harder to say goodbye to Millikin than she thought.

“I always said, if I could be a professional student, I think I’d be so good at it. I take comfort in classrooms,” Pierson joked.

While she would excel as a professional student, Pierson has known she wants to be a lawyer since she was in high school. She only wavered once when she came to Millikin and switched her major from political science to journalism, which made her realize how much she loved writing and working with the Decaturian advisor, Dr. Scott Lambert.

“I had [class with Lambert] first semester freshman year, right off the bat, which, we all know Lambert’s influence,” Pierson said. She quickly realized that she preferred journalism classes, and the decision to change her major was easy. “That kind of, like, clicked in my brain. I want to be doing something that I enjoy or take more interest in.”

That brought her to the Decaturian, where she’s worked as a writer and editor since her freshman year. Pierson has written a lot of incredible articles, including a running series called “Jeana’s Declassified College Survival Guide” where she provides funny but practical advice to underclassmen.

But Pierson is proudest of a feature article on Jeffery Aper, Millikin’s previous provost. She wrote this piece during her sophomore year. The article was reposted by several universities, including a Harvard University Twitter account for first-generation college students.

“I really liked getting to talk with him outside of his strictly administrator role because we talked a lot more about his life than that,” Pierson said. “I just really got to know him on a more personal level, and even his wife. We’re all still friends on Facebook…I was really proud of that one.”

In hindsight, it makes sense why Pierson enjoys writing features: She has always been a people person. Not only that, but she genuinely cares about getting to know others and understanding why they are who they are. These attributes, which have made her a great journalist, will help her become an incredible lawyer.

Once Pierson added her criminal justice minor and began working in a law firm, her path to law was solidified. Pierson has spent the last two years working for a local attorney who specializes in criminal defense. She does a lot of the office’s clerical work, including drafting and filing legal documents at the courthouse, but also spends her share of time in hearings and trials.

“It’s definitely very interesting, working with criminals,” she said. “Never a dull moment. Some fun times, some scary times…It’s definitely given me a lot of really good experience, especially if I do end up wanting to pursue criminal law.”

In the meantime, Pierson has been enjoying her time at Millikin. Juggling a heavy course load, a few jobs and lots of extracurriculars, she has always been impressively busy—but especially when she joined the leadership board for her sorority, Tri Delta.

“I served as Director of Philanthropy for Tri Delta for about a year and a half. Our philanthropy is St. Jude Children’s Research Hospital, and my older sister, who I’m very close with, was a St. Jude patient,” Pierson said. “Getting to take on that role was a huge deal to me.”

Pierson’s passion showed in her work. During the first fundraiser that Pierson organized, which took place in the heart of the COVID-19 pandemic, the sorority raised $15,000 for the hospital.

“I’m really proud of the work I did running that position,” she said. “It’s a lot of stress, but it was also very worthwhile. And it, you know, made me feel closer to my sister and to an amazing organization.”

Family has always been important to Pierson. Her parents and four siblings live near Millikin, so while she lives at the Tri Delta house during the school year, she still visits her family often. She jokes that she pushes the boundaries with her roommates because her big family has made her “way too comfortable around people.”

“At my house, we are around each other all the time,” Pierson said. “We are not the family where you go shut yourself in your room. If I did, my mom would be like, ‘What’s wrong with you? Get downstairs.’”

Not only are her siblings some of her closest friends, but Pierson’s entire family has been a big support during her college career, especially during hard times. Pierson remembers a particularly difficult semester when she lost her 4.0 grade point average despite three and a half years of work to maintain it.

The disappointment hit hard. But instead of letting it weigh her down, Pierson did what she always does—she found an opportunity to grow.

“I really felt defeated after that,” Pierson said. “I felt very disappointed in myself. But in the end, at the same time, I’m kind of glad that I experienced it, because in the past I put a lot of pressure on myself. And I’m very scared of failing in general; any mess-ups hit me very hard. So having an experience like that…gave me a little comfort almost, knowing that I can slip a little bit. I don’t have to be perfect all the time and put all this pressure on myself.”

This is just one of the many ways that Pierson has come into her own while at Millikin. As she prepares to leave one school and start at another, she has a much fuller picture of who she is.

“A lot of—maybe not my goals, but the intent behind my goals or who I am completing these goals has changed over the past few years,” Pierson said. “I’ve definitely come out of my shell a lot throughout college and gained a lot more confidence in myself through moments of failure and through some of my lower points…I feel like I kind of found myself on a less academic side.”

But the heart of Pierson’s work at the Dec and in her professional life remains the same—for her, it’s all about the people. She isn’t someone who can look away from problems; instead, she asks how she can help. And that’s what will drive her career.

“One thing that’s always been my goal is to help people,” Pierson said. “That’s kind of why I’m passionate about law, the idea of helping people. And especially through criminal law, because I’ve seen how the justice system really fails a lot of people and specific groups of people…and to be a part of fixing that or working to make it better is something that I’m passionate about.”

At the Dec, we have no doubt that she’ll do exactly that. Congratulations, Jeana! We’re so proud of you.