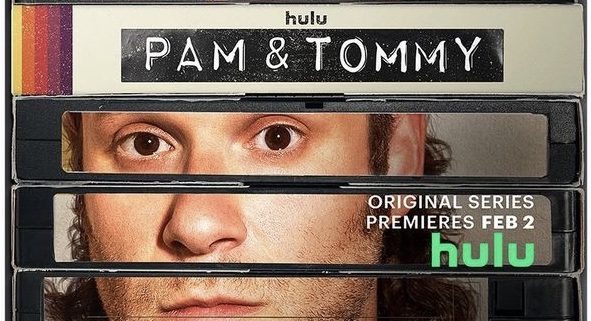 Warning: This column contains discussions of sexual harassment and exploitation.

I had first heard of the 2022 show “Pam & Tommy” from a tweet that displayed a promotional photoshoot alongside the original iconic photos featuring actress Pamela Anderson and Mötley Crüe drummer Tommy Lee. The tweet hyped up the photoshoot, remarking how the show did an impeccable job of portraying the infamous 90s couple. And it did.

I was drawn to watching “Pam & Tommy” because of its all-star cast, a cast including Sebastian Stan, Lily James, Seth Rogan, and Nick Offerman. However, as someone who was born in the year 2000, I didn’t know anything about the scandal that occurred surrounding the couple, which is what the plotline of the show centers around: the scandal involving their 1995 honeymoon sex tape, which was stolen, released, and sold without their consent.

Despite not knowing much going into it, a few weeks ago my boyfriend and I decided to start the new series. As we began watching, there were a few episodes already on Hulu, but we quickly learned that episodes were being released in increments and there was only so much to watch at once.

We binged what we could at the time, and I was immediately invested. The show lived up to my original thoughts: a spectacular cast who did a great job at imitating the real-life people. I thought it was worth the hype. An over-the-top, raunchy, candid look into the unreachable lives of Hollywood celebrities.

But it wasn’t until my sister told me why she refused to watch the show that I learned the real truth about “Pam & Tommy.”

“Pam & Tommy” is a show telling the story of how not having consent can ruin people’s lives, when the producers themselves did not receive consent from the actual people to tell their story.

A source close to Anderson told “Entertainment Weekly” that “I do know she’ll [Anderson] never, never watch this [‘Pam & Tommy’].” Another source told “Entertainment Today” that the series is “very painful” for Anderson. It is also known that Anderson refused to assist with the production of the show in any way.

This is unlike her counterpart, Tommy Lee, who is said to have spoken with Stan, who plays Lee, about his role in the show.

Much like their characters in the show, it seems Anderson walked away from the situation much more scarred than Lee, even 26 years later.

I was shocked and hurt for Anderson when I learned she didn’t support the show being made. Bringing up all the trauma, violation, distrust. I can only imagine.

I began to question my own morality in whether or not to continue the show. On one hand I was engrossed, the acting was amazing and at points had me on the edge of my seat or with tears welling up in my eyes. While violating, the show was good. Good, yet hurtful and disrespectful.

The producers crossed a line.

But is watching the show crossing a line of morality for viewers? Are viewers able to separate the art and those who contributed so much to create it, like the actors, with the malignant consequences it has created for those in reality?

I think it is a personal choice. Every day we see shows and movies that depict horrible actualities of the world. “Saving Private Ryan,” “Schindler’s List,” “Thirteen Reasons Why,” “The Act,” “Extremely Wicked, Shockingly Evil and Vile.” It is natural curiosity for us to wonder about the details behind these events, even if reality is exaggerated for dramatic effect.

“Pam & Tommy” has made me more aware of the toxic Hollywood bubble, including its blatant sexism and misogyny beyond belief, that made it impossible for couples like Anderson and Lee to survive. It made me feel for Anderson even as someone looking at the situation almost three decades later. I can relate to her hurt as it embodies pain that women still experience today through inequalities, objectification and sexualization.

While I am heartbroken that Anderson is reliving the pain of her past once again, “Pam & Tommy” gave me so much admiration for her. She is resilient, funny, and deserved so much better than she received. She is the heart of the show.

If you watch the show, watch it for the right reasons. Watch it for Lily James’s incredible acting or for everyone’s love of Seth Rogan. Watch it to learn while being mindful and remember how exploitation is a vicious cycle. Pamela Anderson is a badass for surviving it.