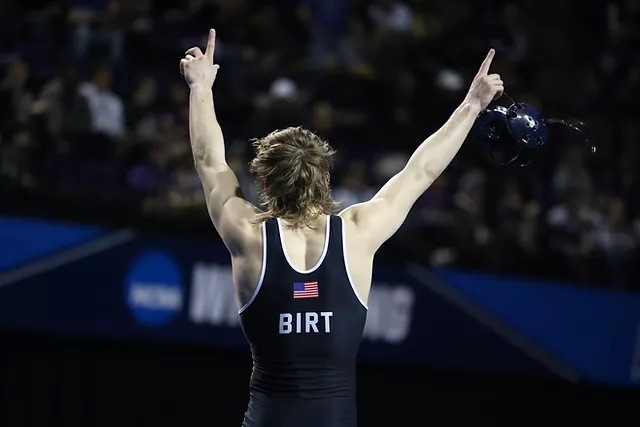 The big question is, how did Birt pave his path to greatness?

When looking into the lives of successful collegiate athletes, there is typically a pattern of the athlete spending most of their childhood practicing their sport and participating in summer leagues and tournaments. Years upon years of time, effort, and money were thrown into molding the athlete into who they are.

Birt has a slightly different story. His journey with wrestling began his freshman year of high school.

Wrestling was not a new sport to Birt. His father, Ryan Birt, coached wrestling at Millikin University, and Birt’s two older brothers wrestled at Millikin before him. Upon entering high school, Birt decided to join the wrestling team for fun. As he had joined the team for fun, Birt did not take the sport seriously and did not see much success throughout his first three years of wrestling.

One summer, Birt went to a 28-day intensive camp that was built to push athletes out of their comfort zone, make them harder workers, and help them formulate a competitive mindset. Birt pushed himself during the camp and found that he enjoyed wrestling and wanted to work harder at it. During his senior year of high school, he found himself slightly more successful than his previous years.

Even with the improved success he achieved during his senior year, Birt had no desire to wrestle at the collegiate level. Until one day he received a call that changed his life.

“It was the middle of June when my dad called me and said, ‘Hey you’re signing up for classes this week. Get down here,” Birt said. “I thought to myself, ‘Okay, looks like you are going to Millikin.”

Birt made a deal with his father; he would go to Millikin and work hard at wrestling for one year, and if he did not like it, he could go to any other college he wanted. Birt took the deal seriously and started training for the season.

Upon entering his first year of college, Birt quickly bought into the wrestling program because he did not want to partake in some of the college life activities. He spent most of his freshman year wrestling, working, and playing video games; Fortnite to be exact. Birt’s dedication to his training and keeping himself out of trouble led to a conference championship and an All-American status, a feat which is a rare accomplishment for freshman athletes.

After the sweet taste of victory, wrestling became Birt’s life. Outside of classes, Birt dedicated all his time to wrestling practices, lifting, and putting in extra work on his own. He continued to see success, earning accolades upon accolades for the next couple of years, including two more All-American honors.

When the Covid-19 pandemic hit, there were many athletes who were affected, including Birt. After being sent home before the NCAA DIII Championships his junior year, Birt, along with all athletes, was told his upcoming season may not happen because of the pandemic.

Rather than risking a year of eligibility on a questionable season, Birt decided to take a year off from school. His plan was to spend a year training and then re-enroll as a full-time student the following fall. Much to his surprise, the NCAA changed their rules to allow athletes to have a season in the spring. Birt re-enrolled at Millikin University in spring of 2021 and picked up where he left off as a wrestler. 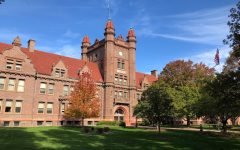 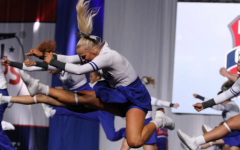 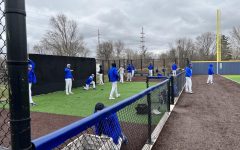 After winning conference for the fourth time in his career, Birt made it to the NWCA Division III Championship where he won and became the National Champion at 165 pounds. While many believed Birt’s wrestling career was over, he decided to wrestle a fifth year, which was provided by the NCAA due to the pandemic.

He took advantage of his fifth year. Birt finished his career 42-0 and was the NCAA Division III National Champion in the 165-pound weight class, which was the first in Millikin school history. Along with this accomplishment, Birt was also the CCIW Individual Champion and won multiple academic awards. He now holds the record for the best season in school history.

Olivia Lett, the head coach of the Millikin Women’s Basketball team, understands the familiar feeling of a championship lifestyle.

“No one really knows what it takes to be a national champion, let alone a two-time national champion,” Lett said. “There’s not a day that went by where Bradan wasn’t getting in two workouts and at an intensity that a lot of people have never seen. That is what separated him throughout his career. The kid literally never gets tired. If he does, he masks it very well.”

Throughout his five years at Millikin, Birt truly made a name for himself and for the wrestling program. While many would assume Birt is an arrogant athlete, holding himself higher than his teammates, his teammate and training partner, Jordan Carson says he is far from it.

“Bradan is very encouraging,” Carson said. “Even though he is the star of the team, he never acts like it. He is going to encourage the weakest guy on the team to the strongest guy on the team. You would never know how successful he has been.”

After graduation from college, Birt plans to build his Station One Nutrition business and participate in wrestling during his free time. He will also bring his experience and leadership back to Millikin as an assistant coach for the Millikin Wrestling program.

For most students, college is a time of growth and change. For Bradan Birt, college has been an incredible transformation. He began uncommitted and disinterested in wrestling and is leaving college as a man who will be a legend in Millikin Wrestling history due to his work ethic, dedication, and success. His story at Millikin is not yet over, rather it is just beginning, as Millikin welcomes him back as Coach Birt.