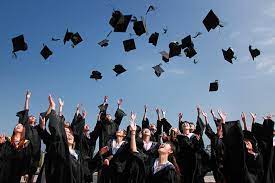 Graduating in a New World

I’m graduating college and entering a completely different world than it was when I started.

As I prepare to wrap up my last semester at Millikin, I keep reflecting on how strange the past four years have been. The COVID-19 pandemic ripped the floor out from under us. Political turnover—but mostly turmoil—has haunted the news. The Earth is in a seemingly never-ending flop era, and it sucks.

When I started college, it was 2018 and I was fresh out of high school. Like most 18-year-olds, I still had a lot to figure out about the world around me. And then that world went through a couple of major changes, and with that came some rapid-fire lessons to learn alongside my nightly homework.

It’s hard to navigate a new world when you never really found your footing in the old one.

While there were some pretty obvious global changes, everyone also goes through their own growth at college, of course. The shifts in my personal life were more subtle, even though they sometimes felt just as seismic. It’s been four years since I first stepped foot on campus, and I’m about to leave as someone totally different.

I’m also about to leave with a degree, and now that I’m so close I can almost hold it in my hands, I have to admit: It feels pretty sweet. It feels like all of the papers and tests were worth it, as stressful as they were at the time. The growing pains, the unsteady footing, the rough landings—worth it for the diploma I can’t wait to receive.

It was not an easy win. I can’t tell you how many times I contemplated dropping out. Not in a joking “I have a lot of homework and want to drop out” kind of way, but in a “Googling about leaves of absence while crying” kind of way.

We don’t talk about that much, all the reasons why people decide to withdraw from the university or transfer or take semesters off. But I think it’s more common than we realize. The traditional “bachelor’s degree in four years right after graduating high school” path isn’t always realistic, and we need to stop pushing the same plan for everyone regardless of who we are and what we have going on.

Ultimately, I stayed at Millikin, but I saw a lot of friends leave. They all went on to schools or jobs that were much better fits for them, and I’m proud of their success. I’m proud that they had the self-love to let themselves do that.

When I came to Millikin in Fall 2018, I knew exactly who I was and what the next four years were going to be. I planned to put my head down, get good grades, and climb my way up as well as I could. Basically, I planned to do what I had always done—bottle it up, work as hard as possible, nearly kill myself in ridiculous efforts to be the best I could be.

I did not plan on a global pandemic. I did not plan on family health issues and the deep need I would feel to be home. I didn’t expect to question so much about myself and the world and what I want.

But I also didn’t plan on meeting this amazing found family I have now. I didn’t plan to completely change my definition of success into one that fits me better and doesn’t require all-nighters to feel like I’m deserving. I didn’t plan to become who I am now.

The thing is, I love who I am now.

Honestly? The 18-year-old who came to Millikin would be so disappointed in the ways I’ve seemingly failed. My life and my future look nothing like what I expected them to.

And the 18-year-old would be wrong. It’s because the world has sucked, because of these personal highs and lows, that I’ve become who I am: a 22-year-old-almost-college-graduate with a much fuller picture of what I care about and who I want to be. The past four years have been terrible and wonderful. I stand by pretty much every decision I’ve made while at Millikin and I wouldn’t trade any part of it.

It’s my final semester, and I’m not sure what’s going to come next for me. (Though fear not, Mom and Dad; I do have some ideas.) The lesson from college that stands out the most is that everything can change in a split second, both globally and personally, and that might throw you completely off course. Frankly, it’s hard to make plans in a world like that, a new world that everyone is still trying to understand.

But if we’ve proven anything, Class of 2022, it’s that we’re fast learners. I’m pretty sure we’ll figure it out.