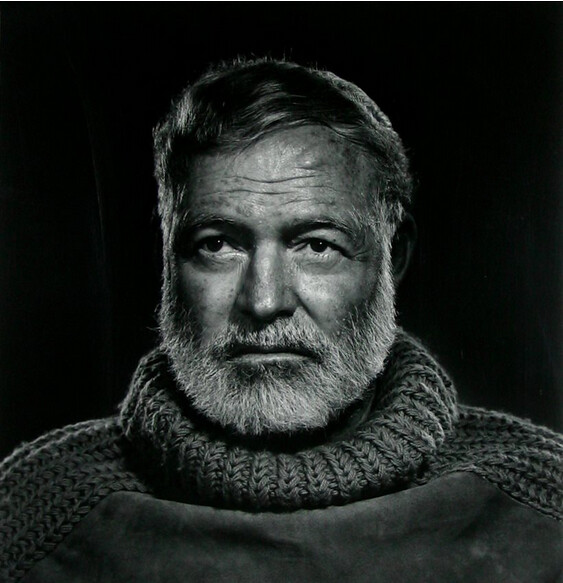 Here is what I do know: In high school, I was taught to believe that Hemingway was one of the greats. Like now, I knew nothing about him, but I knew his name. The name Hemingway carries weight in American literature. That fact is undeniable.

Switching gears a little, you guys know what cancel culture is, right? Cancel culture is the semi-toxic environment of the past few years, where celebrities are (sometimes rightfully so, sometimes unrightfully so) “canceled” for saying/doing things in their personal lives that do not align with current-day political correctness.

I won’t spend too much time talking about cancel culture, except to pose the question: Why don’t we take cancel culture and cancel the people who SUCK who we still regard as great people in history? I motion to cancel Ernest Hemingway for being a sexist pig and an all-around bad person.

Like I said, I haven’t read all of Hemingway’s books. Shoot, I definitely haven’t even read a majority. Until two weeks ago, I had only read one book by him: “The Old Man and the Sea.”

Ahhhh, “The Old Man and the Sea.” The book all high schoolers are forced to read follows along with the “Hemingway is great” narrative. Up until I read more of his work during the past few weeks, “The Old Man and the Sea” was my only true context for Hemingway’s writing. While the book about sailing is a tad on the boring side, it does no harm. It was well-written, occasionally thrilling, and deserved its recognition.

However, my beef comes with the fact that many students, like me, associate only that story with Hemingway and none of his other works that show his true colors.

This semester, as an English Writing major, I am taking the class American Literature 1900-Present. As you can probably already guess, we just finished reading Hemingway.

I told you I haven’t read most of his work, so I’ll be honest. The only works I have read by him (besides “The Old Man and the Sea”) is one chapter from “The Sun Also Rises” and his short stories “Hills like White Elephants,” and “The Snows of Kilimanjaro.” It’s not a lot, I know, but it was enough for me to realize he is not great.

For example, in how he describes the appearance of his female characters, characters who also often go unnamed. Coincidence? I think not.

“She had a great talent and appreciation for the bed, she was not pretty, but he liked her face…” Hemingway writes in “The Snows of Kilimanjaro.” Because of course a woman wants to know that they may not be pretty, but at least they’re good in bed.

Or like in chapter 3 of “The Sun Also Rises” when he writes, “She grinned and I saw why she made a point of not laughing. With her mouth closed she was a rather pretty girl.”

He also resorts to calling women names, like in “The Snows of Kilimanjaro” when he repeatedly refers to the female character as a “rich bitch.”

Hemingway writes about women as if they are objects. He almost never has anything positive to say about them, nor do they ever positively contribute to the plot. They seem to weigh down the male character as an unnecessary annoyance. It’d be one thing if he wrote one story with a female character like this, but it seems to be a trend in all that I’ve read by him.

Plus, his treatment of women carries into his personal life.

In his life, Hemingway had four different wives. Hemingway cheated on each of his wives and ended up marrying his mistress shortly after divorcing the previous wife. Oddly enough when doing research on his wives, many of them have the biographical description of being “unremarkable” in appearance but making up for it by being “sensual,” according to an article by Eudie Pak called “The Many Wives of Ernest Hemingway.” Whoever wrote that must have taken some writing inspiration from Hemingway himself.

For Hemingway, sexism is just the tip of the iceberg, which, funnily enough, is how he described his writing process. He is also problematic for his portrayal of toxic masculinity, being racist, being overwhelmingly egotistical, and being a “bully,” for lack of a better term.

Like I said, none of these speak to his talents as a writer. He did have a unique way of writing that still influences writers today. BUT that does not mean we should teach him as “one of the greats.” I mean, Hitler had strong leadership skills, but we don’t hold him as one of the greatest leaders of all time. That was extreme, but you get my point.

Teach Hemingway’s works, when necessary, like in a college writing course, but don’t teach him in high schools chalking him up to be some amazing man he wasn’t. Looking at his writings from a 2021 lens, his morals are tone-deaf and absurd, his character descriptions are offensive to all of womankind, and his misogynistic, cavemen-esque male characters are overdone, repetitive, and frankly boring at this point. That is why I move to cancel Ernest Hemingway.