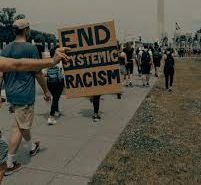 Why Do You Actually Fight?

There are people in this world trying to use their voice for good. But in reality, they are only silencing the people who actually need to be heard.

The white savior complex. It “refers to a white person who provides help to non-white people in a self-serving manner.”

When these people take their voices and scream from the mountain tops, they distract from the voices of the oppressed. When news stations and people in the position of power look for someone to listen to, they often subscribe to the narratives of these that are not black, Indigenous and people of color (BIPOC). They can’t truly hear the real issue if they aren’t hearing it directly from the source.

It’s like playing the game of telephone. What is said in the beginning isn’t what is said at the end. Messages are created and become totally unclear, unfocused and incorrect.

As a black woman, I have witnessed the horrific treatment that comes with having melanin firsthand. The amount of fear that runs through your body as you get passed by a police officer could bring you to your knees and make you paralyzed.

No one has taken into consideration if those people that identify as BIPOC have committed any crime or not, they are just considered dangerous because of the color of their skin. All they see is danger. It’s sad that the color of someone’s skin makes them dangerous in this world.

Then you have those that call themselves allies that see “no color.” But when they “see no color,” they see no problem at all, even if they, the white person, are the actual threat.

We understand that you are frustrated but that doesn’t mean that you can throw all of your values out the window. When you let your emotions overcome you, you make it seem like your feelings are more important than the actual cause at hand.

People with white savior complex make the world see them as an ally to those who are being oppressed. But to those who are oppressed, they just seem like a false hope. There are some people of color that can see through you as soon as you come out of hiding, but there are more who back you up. To those who stand beside you, I have some questions.

How much could you change if you were the one to speak up? Why aren’t you leading this cause? It is your life and your rights that are on the line. Is your voice truly being heard? Is what you want to be focused on being brought to the correct people? Are you challenging your friends/family members that are using their voices?

People that are white don’t have to prove themselves the same way as someone who is of color. There is a fight that starts the second you are conceived. As a black girl, you are an angry Black woman that is only here to breed. As a black boy, you are seen as a “thug” no matter how old you are. You can’t even play with toys or walk down the street to grab a drink and candy without a mark on your back. The second we are brought into this world, we have to fight. Fight to be seen as who we really are.