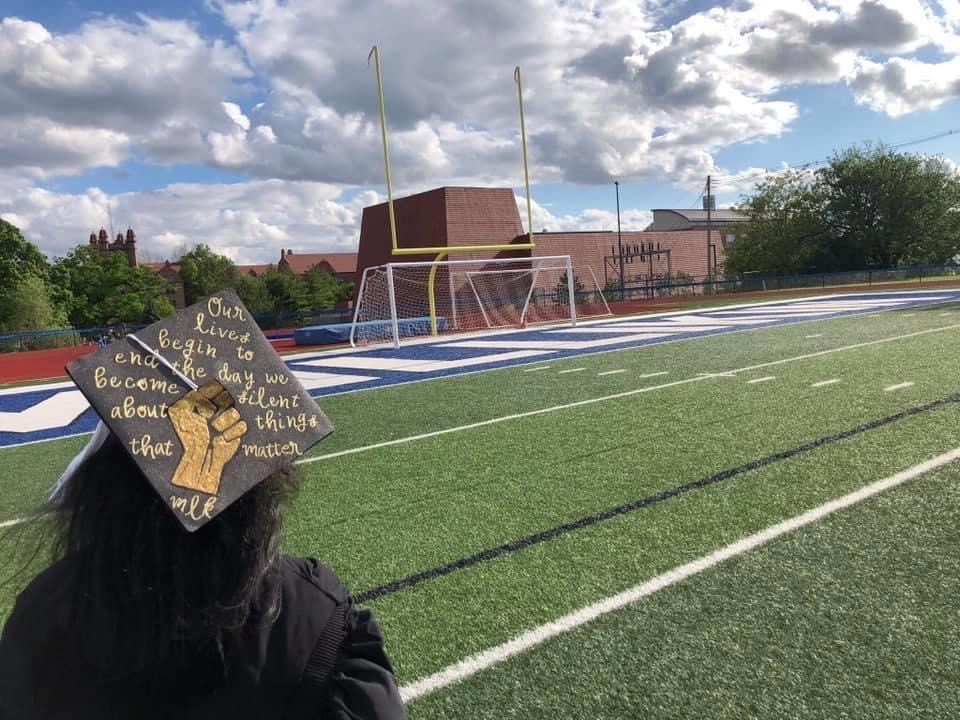 Sorry Not Sorry: Kneeling in America is Not Going Away

Former NFL player Colin Kaepernick chose to take a knee during the National Anthem a few years ago to protest police brutality against Black people.

Right around that time, some Millikin University football players chose to do the same. People were outraged. And the Millikin team ultimately chose to stay in the locker room to appease everyone. The story gained national attention when one player snuck out to go and stand for the Anthem.

At the time, I co-wrote an article with one of my classmates about this situation and on the issue of kneeling.

Well, here it is, 2020, and we are fighting the same fight we did all those years ago.

Boyer does not necessarily agree with kneeling, but he believes kneeling is not and has never been disrespectful and that it has nothing to do with the flag. There are other veterans who agree with this.

With all of the recent George Floyd protests and opening the eyes of White America to the injustices that Black America faces, the subject of kneeling has been brought up once again. People have wondered if players will take a knee once the season kicks off.

Kaepernick has been blackballed by the NFL, but still remains strong in his convictions. And he is still an advocate against police brutality, social inequality, and racial injustice.

But others disagree with kneeling. A couple weeks ago, New Orleans Saints quarterback Drew Brees spoke about how he would never respect kneeling and how his grandfathers fought in the war.

“I will never agree with anybody disrespecting the flag of the United States of America or our country,” Brees said.

This resulted in a major backlash that I did not see coming. For once, people understood why it was acceptable to kneel. So they chose to educate Brees.

It was explained to him that kneeling has never been about the flag, and was never meant to be disrespectful to those who served.

Instead, the idea of kneeling is to show that there are major injustices in this country that we can no longer overlook. That people are still suffering and being killed for the color of their skin. Kaepernick said that he would not stand until he saw a real change.

The National Anthem is used to represent freedom and justice in the United States. But that does not apply to everyone. Not everyone feels that way. So, why should people stand up for the ideas and views that do not represent them?

Think about it. Brees mentioned how his grandfathers served and were heroes. Well, so did the Black grandfathers of many of his teammates. And many Black citizens in this country.

The National Anthem is used to represent freedom and justice in the United States. But that does not apply to everyone. Not everyone feels that way. So, why should people stand up for the ideas and views that do not represent them?”

Or let’s take a look at how Black people have been treated in this country. When the country was established and the Anthem was written, Blacks were enslaved and seen as less than human.

The reality is that not every American feels the same way about America.

To some, we live in different Americas.

White America is far different than Black America. Both White and Black people live in an America where they deal with trials and tribulations, but one America is made more difficult by skin color. Can you guess which one?

And one is more privileged. Can you guess which one?

The reality is that not every American feels the same way about America.”

So, while some of you feel compelled to place your hand over your heart and stand or get tears in your eyes and feel proud of this country, others are not. Stop trying to force these views onto others.

You can stand, but we can kneel. And there is nothing wrong with either one.

More people are starting to get it. Especially white people. A number of White coaches and players have said that not only will they accept kneeling, but they will kneel as well.

Cleveland Browns quarterback Baker Mayfield was asked on Instagram if he would be kneeling. Baker said, “I absolutely will be kneeling.”

Another White player, JJ Watt, who plays for the Houston Texans, expressed that if people still think kneeling is disrespecting the flag, they have not been listening.

The biggest surprise came when NFL commissioner Roger Goodell apologized for silencing the protests and not accepting it when the kneeling first began.

The point is, we can expect protests such as kneeling this NFL season and possibly in other sports as well. And White players will be joining.

If you have a problem with that, you just don’t get it. And if you don’t get it by now, you probably never will.

Kneeling is back, and it is here to stay. Sorry, not sorry.