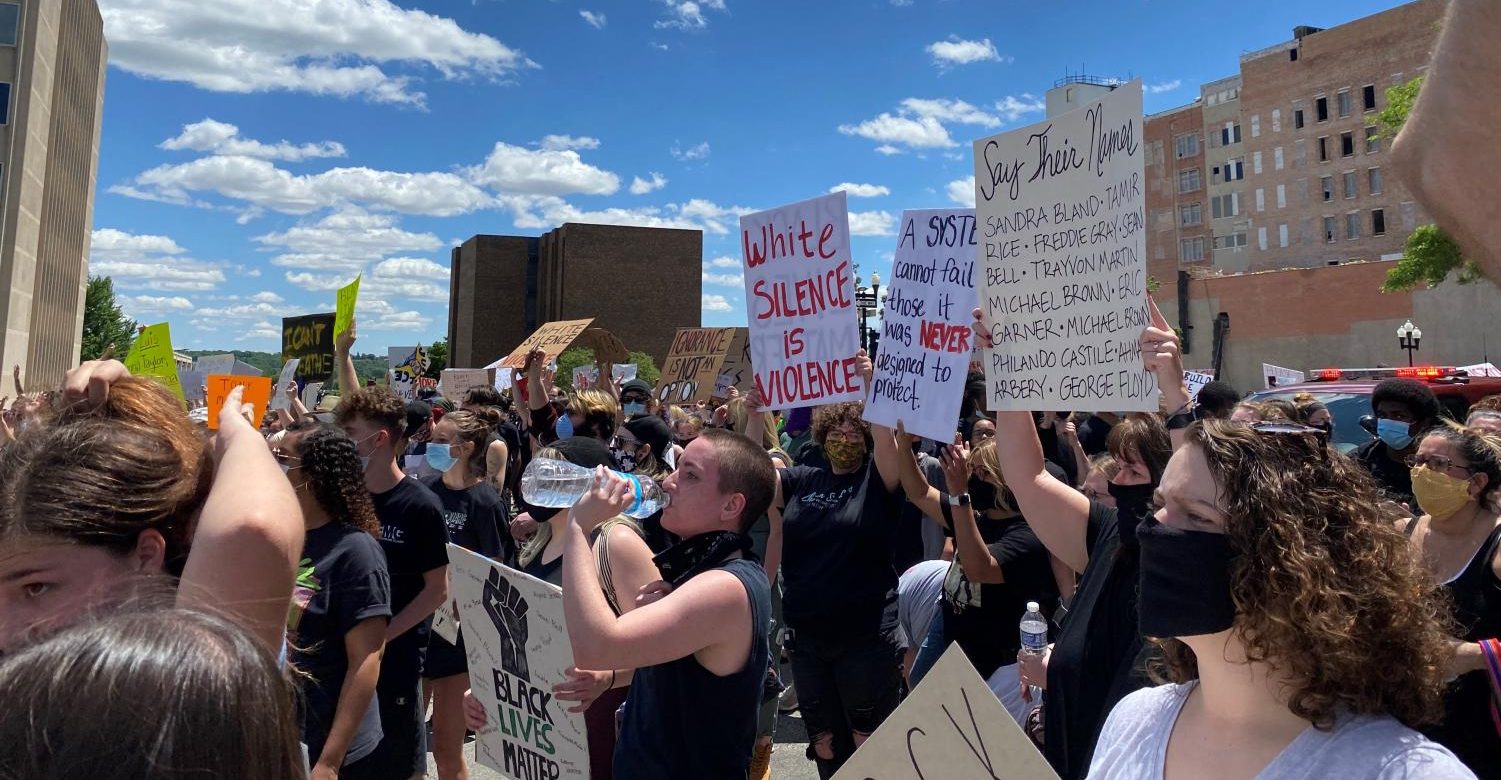 A protest in honor of #BlackLivesMatter in Peoria, Illinois (Jordan Diver)

A protest in honor of #BlackLivesMatter in Peoria, Illinois

Between Peoria and Decatur, thousands gathered to protest the deaths of black individuals killed by police brutality and racism. Breonna Taylor, Ahmaud Arbery, and George Floyd are the some of the most recent, publicized deaths over the last two months.

Despite those three deaths, many others have fallen through the cracks—killed in similar ways but did not make national news or receive the same attention as Taylor, Arbery, and Floyd. Nevertheless, protesters this past week have marched to remember and fight for all the black lives taken because of racism.

Peoria, one of the most well-known cities in central Illinois with a black population of almost 30 percent, showed support for the movement on Saturday. People of all races and ages took to the streets to make their voices heard. The protest, organized by a group of young adult black women, was peaceful, yet emotional.

As hundreds began to gather to begin the protest, tears filled my eyes and I was overwhelmed as to why I was there. I cried tears of joy because of all the people coming out to protest right from wrong.

Children whose parents are raising them to love—not hate because of someone’s race, made me hopeful for the younger generations. The elderly, some of whom had to walk with a cane or walker, brought me back to reality, realizing that this has been a long, hard-fought battle, with little progress.

As hundreds began to gather to begin the protest, tears filled my eyes and I was overwhelmed as to why I was there. I cried tears of joy because of all the people coming out to protest right from wrong.”

The joy quickly left my body as I became angry and upset. I was 13 years old when Trayvon Martin was murdered. That was the first time in my young life it became apparent that I will never face the same hardships as black individuals.

I will never be considered “suspicious” or a “thug” because of the color of my skin. I will never have to worry about getting home safe or never seeing my friends or family again because I might be murdered because of my race. I am 21 years old now and the same fight continues as well as my privilege.

Over the span of the two-hour protest, we marched from the Peoria Riverfront to the police department to the courthouse plaza. At the plaza, everyone stopped to listen to the speakers share their stories and experiences as well as the stories and experiences of other black Americans who were unable to speak, while also encouraging others to keep fighting this fight; to keep protesting.

In front of me was a father with his teenage son. Both men were black. The father had his hand on his son’s back while they both listened to the speakers. The father seemed to be comforting his son, or maybe comforting himself. I can only imagine what was going through the father’s head, knowing that he or his son might be the next victim of police brutality. Or maybe they knew someone who had been a victim of the violence. Point is, I doubt the comforting was a coincidence rather a realization of what the fate could be for these two black men in America.

The protest that took place in Decatur similar to Peoria’s protest. Again, people of all ages and races showed up, ready to fight for justice. Here, I was able to march alongside my Millikin friends and faculty, as well as the Decatur community.

Again, I felt emotional, and for the most part, it was anger. I was angry that it seemed like the same thing, just a different day. That this would be just another protest resulting in little or no change by authorities. I was angry that it seemed like nothing was getting through to people around me, particularly in my hometown and my family. I was angry at the way police brutality and violence seemed to only grow during these protests. They have ruthlessly attacked peaceful protesters and journalists, while making it harder for medical personnel to treat injured protesters by destroying medical tents.

After subconsciously thinking about all the hate, the Decatur protest reminded me of love. While marching, many people honked their cars at us to show solidarity. Some even parked so they could get out of their cars and cheer the protesters on. Others saw us marching and joined. At one point, an interracial couple remained ahead of me, holding hands while they marched. That is when I realized love truly is bigger than hate.

Because of hate, George Floyd along with thousands of other black Americans have been murdered in this country. But because of love, we continue to fight and march on. We must love one another enough to stand up for them when injustice has been done.

It is easy to look at all the bad things going on in the world, and more specifically in this country. Because of the love people had for Floyd, he did not die in vain. He is changing the world. All 50 states participated in protesting for the Black Lives Matter movement. Outside the US, many other countries have participated as well.

On Wednesday, Minnesota’s Attorney General Keith Ellison increased charges against Derek Chauvin, the officer who murdered Floyd, to second degree murder as well as charged the other three officers involved. Because of love, the Minnesota Freedom Fund received so much in donations, they are turning people away, encouraging them to give to other bail funds. Because of love, petitions have been signed, meeting more than the initial goal for signatures.

Because of hate, George Floyd along with thousands of other black Americans have been murdered in this country. But because of love, we continue to fight and march on.”

We are not done. Justice has not been served. But we are seeing unity in these protests. We are seeing some progress. Please, do not let Breonna Taylor, Ahmaud Arbery, George Floyd, and so many others die in vain. We must continue fighting for what is right.

No more of history repeating itself. No more excusing racism and hate because it is uncomfortable to talk about. No more black lives should be lost to the corrupt system of the police, their power, and abuse. The fight is here. The time is now. We are the future, and it is about damn time we make some serious progress towards justice.