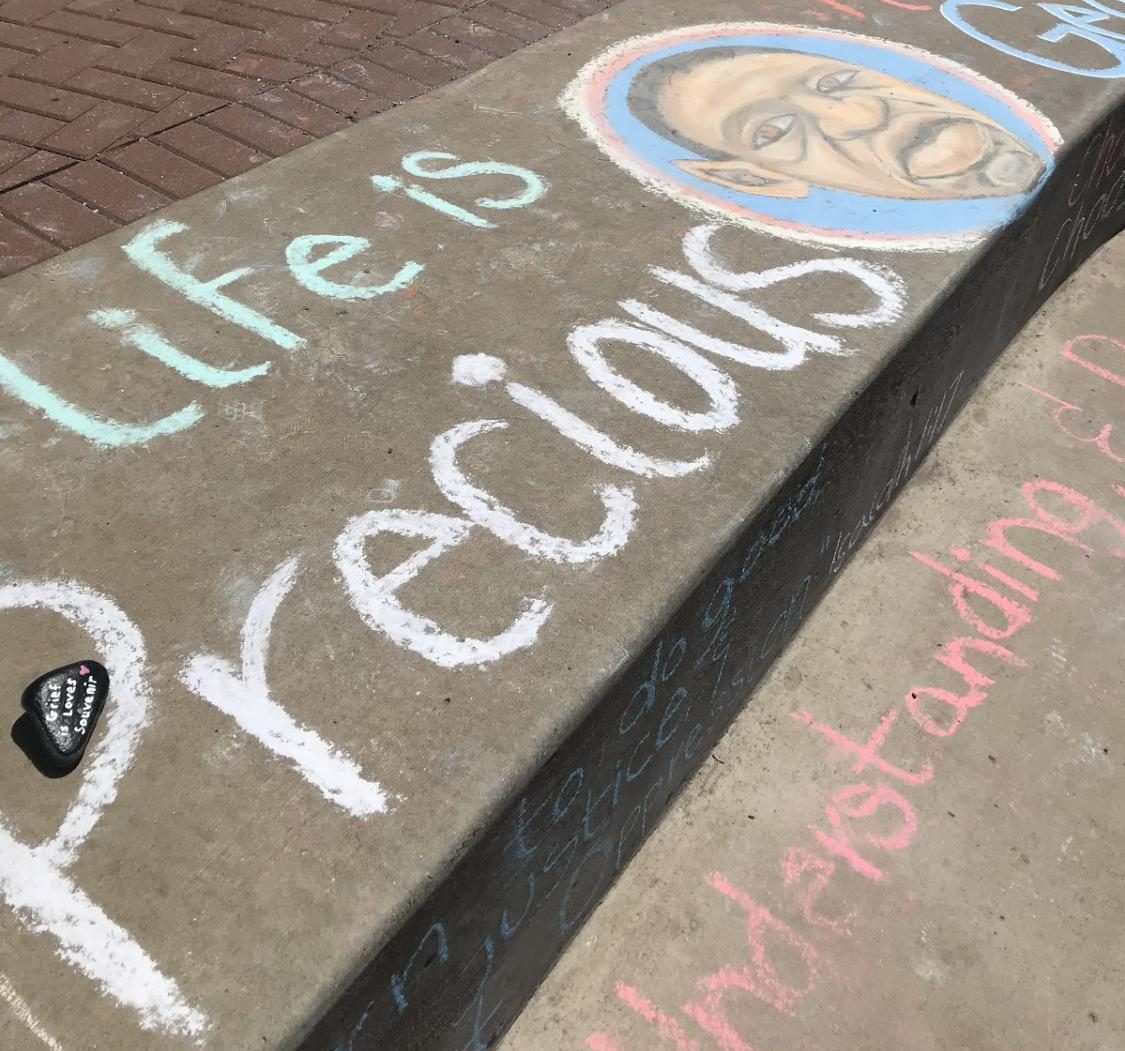 Protestors risk their safety for their beliefs

One week ago on May 25, 2020, George Floyd was murdered by Derek Chauvin, a police officer with the Minneapolis Police Department. Chauvin killed Floyd by pressing his knee into his neck, causing him to suffocate. Once again, the world heard the words, “I can’t breathe.”

Eric Garner famously said those words right before he was murdered by former NYPD officer Daniel Pantaleo in July of 2014. Pantaleo was not fired from the NYPD until 2019. To this day, he has not been charged with any crime.

The murder of George Floyd has sparked protests all over the country, even the world. But, most notably, Minneapolis has protested around the clock every day since Floyd’s death.

Many have been quick to criticize protestors, but they’re not getting the whole story. Every night, I watch the news for hours as military helicopters fly overhead. I don’t live in a war zone—I live eleven miles away from Minneapolis.

Many have been quick to criticize protestors, but they’re not getting the whole story. Every night, I watch the news for hours as military helicopters fly overhead. I don’t live in a warzone—I live eleven miles away from Minneapolis. ”

Three different people who have been a part of the protests in Minneapolis were interviewed for this piece. Their real names will be kept anonymous for their own protection, as many fear that the police will make arrests based on names and faces they see in the media. It might sound extreme, but it’s not impossible.

Jennifer attended the first night of the protest. They hadn’t intended on being a part of the protest initially; they were just driving down there to see what it looked like. But after watching a police officer fire a tear gas can into the face of a peaceful protestor, Jennifer couldn’t just stand by and watch.

“He fell unconscious and the other bystanders yelled for medical attention and the man’s childhood-friend was begging the cop paramedics to help. None did,” Jennifer said.

Jennifer, who has a small amount of first responder training, tried to help the man come back to consciousness by talking to him and supporting his head. But even while Jennifer and other protestors were helping the man, the police treated them as if they were violent.

“The most devastating part was as we were carrying the unconscious bleeding man across the street, the police officers were still targeting the group with rubber bullets and tear gas,” Jennifer said. “There were also flashbangs going off above our heads as we are medically treating the man.”

After dealing with something as traumatic as having a stranger’s life in your hands, it might be hard to go back to the scene to fight another day. But Jennifer has returned to protest two other days. Their answer on why was simple: “It’s what’s right.”

Michael has been posting live updates on their Facebook page to help warn protestors of police movement and if the police plan on using force. One of their colleagues listens and transcribes the police scanner, which Michael reads and posts if there is any important news.

Michael wrote, “Right now, ESPECIALLY after the destruction of the third precinct, the protests are decentralized. That means there is a heavy action-reaction play between enforcement personnel and demonstrators.”

“The purpose of [my] posts is a little foggy. People will use what they want/can/need from that information,” Michael said. “My greatest obligation was to any protestors who needed to not get caught by enforcement, or need to know the danger they are in (and know when to run); the specific danger of highly volatile lines of law enforcement is the behavior of those people becomes unpredictable, and so level of force can spike and de-escalate with extreme speed.”

Michael wanted to clarify who they are referring to when they say the word “protestor.”

“[Protestor] is a word I use specifically; there are a few identifiable factions present that all have different rules of engagement,” Michael said. “Protestors are those impassioned people we see mostly during the day, and who demonstrate [against] symbols of police oppression.”

Riley attended the fourth day of protesting in Minneapolis. They protested during the day, so they were able to stay mostly safe, but they acknowledged that nighttime is when things turn sour.

“While there wasn’t any force or violence used by either the protestors or the cops at the protest I went to, the nights surrounding my protest showed many acts of violence,” Riley said. “The most common tactics used by police was tear gas, rubber pellets and flashbangs.”

Protestors report that the police use tactics like tear gas, rubber bullets, flashbangs, tasers, mace, and physical force such as shoving, punching, tripping, and kicking.

One of the main frustrations bystanders have with the protests is the fact that some have become riots, and businesses have been burned and looted. Many people are using the looting as an excuse to try and silence the movement, even though there is evidence that looters aren’t associated with the protests, and that anarchists and opportunists were the ones who started the destruction.

“I think that the people mad about the looting are seeing a city being ruined, and frankly, it is upsetting to see,” Riley said. “But what you can’t see is that for a very long time this city has been ruined by repeated targeted racism. What you are seeing visually only scrapes the surface of what people have been feeling for a very long time.”

“I think that the people mad about the looting are seeing a city being ruined, and frankly, it is upsetting to see,” Riley said. “But what you can’t see is that for a very long time this city has been ruined by repeated targeted racism. What you are seeing visually only scrapes the surface of what people have been feeling for a very long time.””

“We paid for its construction. We burnt it down. We’ll pay again when the city council authorizes the budget for it. It was our symbol, of oppression and of resistance. We own the cost,” Michael said. “I pose this question to people that rage at the looters: Why, in your chest, are you impassioned over the loss of wealth? There is no shame in the answer that bubbles up. Then, I ask, are you willing to donate to the food shelves and civilian emergency networks that are organized to fill the gap those markets left? Is it empathy for people, or a passion for property that makes you so angry? You are allowed to be angry at looting; you disserve yourself if your anger at the death of George Floyd is eclipsed.”

While some bystanders continue to be angry about destruction, rumors circulate about police, and possibly undercovers, starting the destruction to encourage anarchists. This may seem crazy to people out of state, but those who have attended protests during the nighttime are reporting suspicious activity.

“I strongly believe this theory,” Jennifer said. “I have seen people on rooftops with binoculars, and unmarked vehicles around the city. There are also many people around corners with minimal markings as police officers, but a badge may be on them or the armband markings talking into walkie talkies watching your every move. This is the most unsettling part.”

Jennifer talked about the destruction they’ve seen done by police. They said that first responders, doctors, and nurses have been volunteering and setting up medical tents to help protestors. On multiple occasions, the police have tear-gassed these medics, then trashed their tents.

“They have also decided to destroy part of George Floyd’s memorial at Cup Foods,” Jennnifer said. “Within hours it was rebuilt and it shall continue to be. We will not forget his name.”

While Michael declined to comment on the suspicion, they agreed that the unnecessary, aggressive force is constant.

“I can tell you this with certainty: We are wary of egregious, vindictive police violence against us, just for showing up,” Michael said.

Being a part of this protest is not easy. Protestors are in constant danger, even when they are protesting peacefully. On Sunday night, a semi-truck drove through a crowd of protestors on a closed highway. Videos of police antagonizing peaceful protestors are abundant. There has been word that supremacist organizations, such as the KKK, are in town.

Jennifer, Michael, and Riley acknowledge how scary it is out there. The looming fear of what might happen has prevented many people from going to Minneapolis to march.

Michael said that the scariest part of the protests is clear.

“The police. The police hands down,” Michael said. “Over and over again I have friends and acquaintances that have been gassed, fired at, and deafened or blinded by grenades without warning. Going down, my friend and I wrote each other’s numbers on each other’s arms and the numbers of our mothers in permanent marker if either of us were incapacitated by police and taken to a hospital. We talked about when to run. Both of us wanted to avoid violence. This was in preparation for simply being there.”

Jennifer’s answer was simple. “Fear for my life. Will I make it home? Will I get injured? How long do I have to be afraid of law enforcement?”

Tensions have been high in Minneapolis for a long time. Though Minneapolis is one of the most liberal cities in the country, it struggles severely with racism. There is a huge racial gap in the city, especially when it comes to education and health care. Minneapolis has one of the largest housing disparities based on race in the country, as White people own homes at much higher rates than Black people.

The icing on the cake is that theMinneapolis Police Department has a reputation—they’re known for using little to no discipline when it comes to White officers with bad records. Derek Chauvin, the MPD officer who murdered George Floyd, had at least seventeen complaints against him in less than twenty years with the department. Sixteen of these complaints were closed quietly with Chauvin receiving no discipline.

This tension has been bubbling up for decades. Because this is not the beginning, Jennifer said that this is not going to be the end.

“I do not see an end in the weeks ahead,” Jennifer said. “Only when justice is dealt with all the parties will things calm down. The remnants of the protest will send shockwaves for years to come. We will be saying his name for many many years.”

I’m White. I’ll never understand the hardship that the Black community has faced. It is not my job to understand—but it is my job to stand by them. Even if you cannot protest in person, you can help Minneapolis by donating to bail funds for peaceful protestors, to clean-up funds set up by the same protestors who spend every day cleaning the city, and of course, to Black Lives Matter.

Minneapolis is screaming. The city’s cries have gone unheard for too long. And now, the world screams with us. Until there is justice, there will be no peace. ”

I believe it is also important to highlight the fact that you don’t have to be a person of color to help this movement. As a White person, it is my job to amplify the voices of my Black neighbors, as my White privilege makes it more likely that I will be heard. Do everything you can to listen to what the Black community is saying. You don’t have to understand—you never will. But you have a duty to listen and to do what you can to help.

Minneapolis is screaming. The city’s cries have gone unheard for too long. And now, the world screams with us. Until there is justice, there will be no peace.