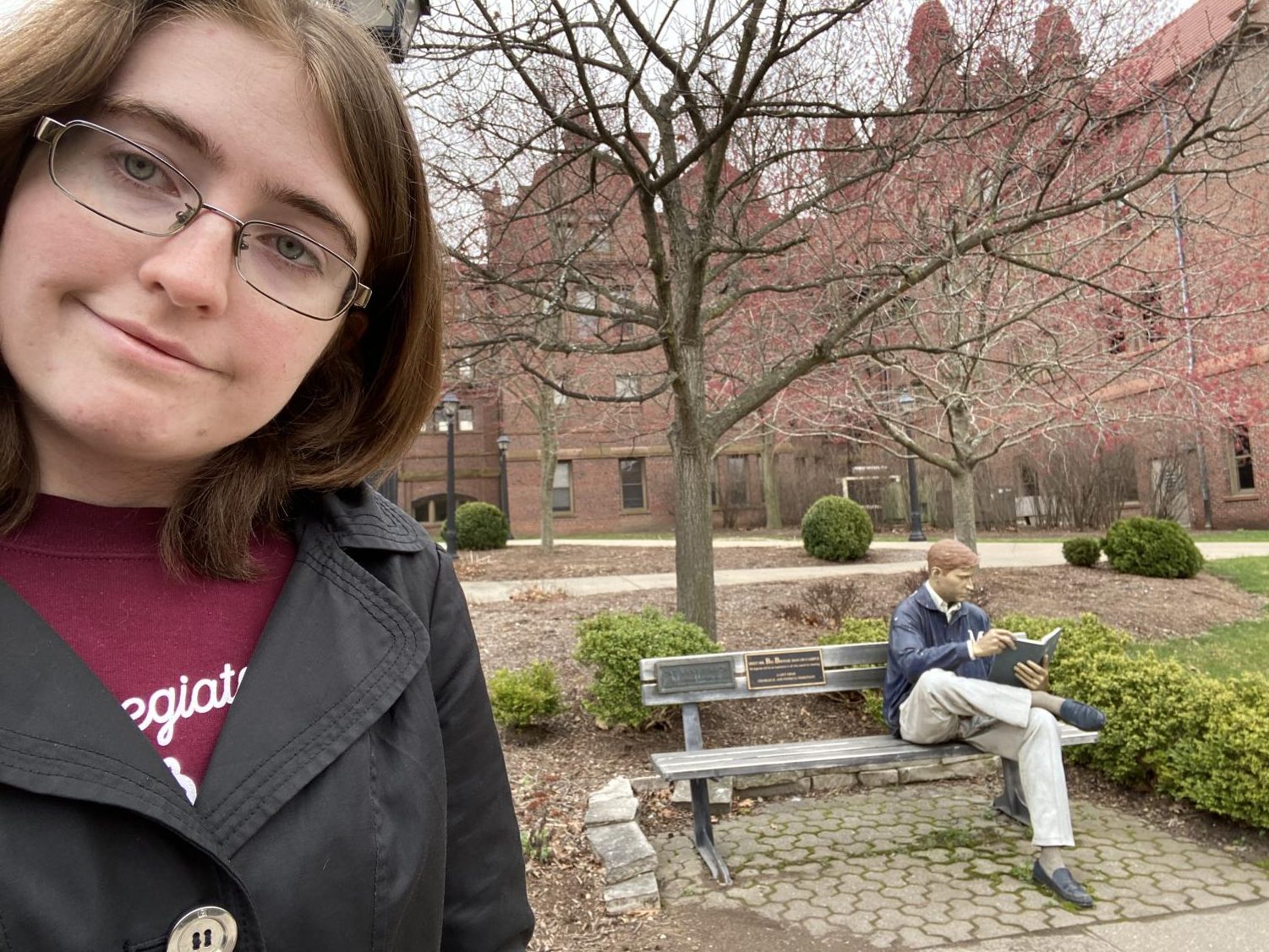 A selfie with the Bronze Man. Photo by Kathryn Coffey.

A selfie with the Bronze Man. Photo by Kathryn Coffey.

At that point, I knew more about what Notre Dame was doing for their graduation commencement than what Millikin was doing. While learning about it is fun, it’s not what I needed to hear so that my folks could plan accordingly.

But it happened. I got the email about what we’ve been waiting for: an update on Millikin’s 2020 commencement ceremony.

Rather than just listing what was going to happen over email, we got a link to a YouTube video featuring our own President Patrick White.

He starts it off by blabbing about how great campus is, pointing to the nearly completed theatre building behind him. The building looks about done, even more than the last time I saw it, and that’s impressive. But I don’t know if it’s just me, but the minutes kind of dragged on.

For those first few minutes, all I could think was, “Okay, that’s really nice, President White, but can you cut to the chase, please? I’m tired of people asking me what will happen with the commencement.”

Don’t get me wrong, I love Millikin’s campus as much as the next guy, but I wanted certainty. There’s no telling when Covid-19 will blow over. A little clairvoyance would be nice. I wanted important information, not sentimental niceties.

Besides, I don’t need to be reminded about what I already miss.

He finally got to the point. He said the inevitable. May commencement is cancelled, but students are welcome to walk the stage at December commencement.

I knew it was coming. It was still painful and disappointing to hear, but judging by the way things are, cancelling the ceremony was going to happen sooner or later. I tried to not be upset about it.

Looking back, it’s just as hard for P. White, too. This was his last year. And now he doesn’t have that chance to send us off into the world with a handshake. This situation isn’t fair for him, or anyone else for that matter.

When I told my folks the news, they told me how sorry they were I wasn’t going to have a commencement ceremony in May. They saw this coming, too. I felt the sadness creeping in, and I had to push it back down so my parents wouldn’t be too worried about me.

They said I could invite friends to a graduation party of sorts via Zoom next month. It could’ve made me feel just a little better about the whole thing, but at that time, it felt like the cherry on top of a crap sundae. Sure, I could see my friends, but I just can’t hug them or anything of the sort.

I spent a good ten minutes staring pitifully toward the ceiling in my room. I thought 2019 was the worst year I ever lived through. Guess I didn’t count on 2020 to say, “Hold my beer.”

Then my eyes drift, almost instinctively, toward a Beatles poster of one of their albums, For Sale. In dark moments as these, John, Paul, George, and Ringo are there. Eight arms to (metaphorically) hold me, giving me comfort with their music.

I thought, “Wait a minute, the Beatles never had a commencement ceremony. Pretty much all four of them never went or finished college, and look how great it worked out for them.”

This thought didn’t fix everything, but it was enough to make me smile a little.

And even ignoring that, there’s Harry, Ron, and Hermione from Harry Potter (to paraphrase someone from St. Xavier University on Facebook). They never got to experience their 7th year at Hogwarts because they were too busy fighting Voldemort. They won that fight and now have successful careers in the Wizarding World (or so I’m told).

So, not having a ceremony isn’t the end of the world, especially if all this effort with social distancing is going toward the greater good. I don’t want to dismiss the pain, but all the same, I want to be as optimistic as I can about this. Without it, I’ll just be a husk of a human being.

As sad as not walking in May is, there’s still hope.

Come December, I hope to walk the stage. Maybe it’ll be a chance to see my friends and professors in person one more time.

I don’t know how these next few months are going to play out, but all I can do is hope. Times are really rough right now, but I dare to dream, pray, and believe.