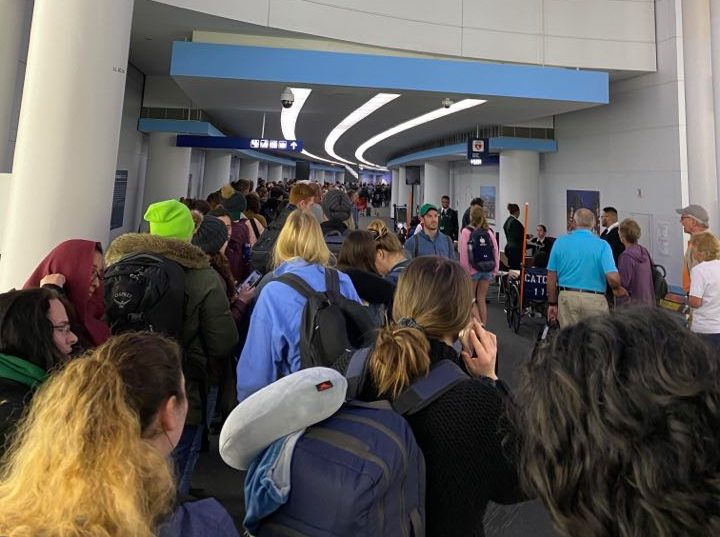 Living through the Lines

Time for waiting. For the inevitable. For the arduous process of getting back home.

We saw photos of long lines filled with anxious Americans desperate to get home.

Heathrow was going to be a madhouse.

We wanted to get there as early as possible to go through security before finding our gate.

Our professors ordered three taxis to the airport. We sped off to our impending long lines through airport security.

As we got our boarding passes, we noticed two huge rectangles on both sides of the terminal. A huge sign told everyone how busy security was in the north and south entrances.

Since the sign only showed two people under it, we figured the south entrance was the way to go. But we weren’t the only people to figure it out.

Soon, the line at that entrance backed up faster than a gas station toilet after flushing, but the line moved up every five minutes or so. For all I knew, we arrived just in time.

A pregnant mother, her young daughter, and son went through the scanner before I did.

That son stood between the scanner and the rest of his family, leaving me waiting right behind him.

He kept dawdling around the scanner, and his mom kept bribing him with stickers and things so he would walk through. It wasn’t until a security man walked by until the boy crossed.

Not once did I curse. He was a scared little kid, after all.

It was hard to keep a straight face, though. This was stressful as it was, but this kid was going to make things just a little bit harder than they already were. I didn’t know whether to laugh or cry.

Finally, I walked through, and I had to be patted down in addition to the scanning machine.

I can’t remember the last time that happened.

But we made it. We had to wait a couple of hours longer for our gate, but we got through security.

It was only half the battle, though.

America was the wild card of airport security.

We didn’t know what was going to happen. We didn’t know if we’d get quarantined on the spot. Even watching the “Downton Abbey” movie during the flight couldn’t distract from the anxiousness build up in my gut.

I wanted to get it over with, though. Whatever happens, happens.

I thought Heathrow’s line was going to be bad. London was nothing compared to O’Hare.

We got two forms. One was for customs and the other was for the medical scan.

I had an on-and-off cold throughout the trip, and it included coughing.

The form had three check boxes: one for fever, one for difficulty breathing, and one for coughing. The form didn’t specify what kind of cough.

One hour in, all I can think about is Portillo’s Hot Dogs.

A few workers came with boxes of Pepperidge Farms cookies and bottled water. I didn’t take any. I had a feeling people were going to need them more than I did.

I didn’t eat on the plane, but I wasn’t really hungry until two hours before landing. Even then, I was too anxious to stomach food.

We turned a corner and I thought, “This has to be the end of the line.”

It was an even longer line…for checking our passports. Two hours after getting in line, we were almost halfway to the customs workers.

An eternity later, I stand behind the red line.

All of a sudden, I hear someone shout, “Hey! Stand Down!”

Chicago police and even the customs officers left their post and swarmed the scene in the health screening line. I didn’t really see what happened, but the spat was squashed in seconds.

Ten minutes later, it was finally my turn. I presented my forms and passport to a woman wearing a blue mask over her mouth and nose, a plastic screen over her face, and gloves on her hands.

After a quick look-see, she directed me to my right, the CDC line.

“Welcome to America,” she said.

I wandered over feeling a little disoriented. Jet lag, light snacking on the plane, and stress over the pandemic make a bad combination on the human body.

I was running on adrenaline at this point.

The wait was incredibly short compared to the other one. While I waited about two and a half to three hours for passport checks, I waited about a half-hour for the CDC health screen.

“Have you been to China or Iran?” she asked me.

“Have you been to Europe?”

I whizzed through a crowd of masked people taking temperatures. The man that checked mine said I was in the clear. From there, I was free to go.

Free at last. But I still can’t shake it.

I saw headlines about O’Hare being a madhouse for people entering the country from all over the world. All I can think is, “My God, I was in that line yesterday.”

This whole process felt like a nightmare. And the worst part is, it seems it’s not going to end anytime soon.

I still try to hope, though.

My senior year may be up in the air, but I survived O’Hare’s long lines. The most I can do is breathe, take things one day at a time and take care of myself the best I can.

Hope is around the corner even if it takes a long time to get there.