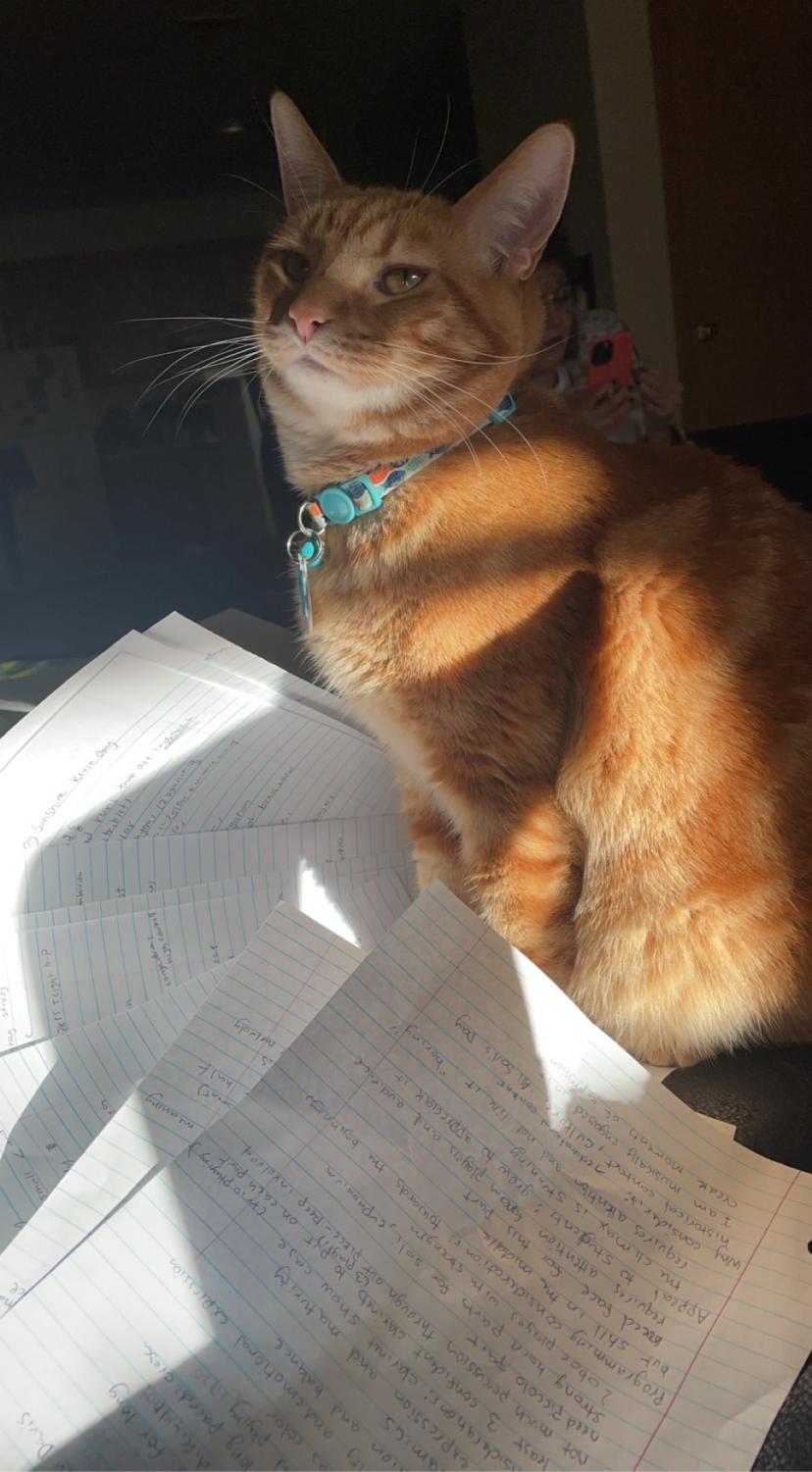 The Millikin student body has officially reached the most taxing part of the semester, where projects, essays, and tests abound. For Music Education students, however, it also means a ton of performances and exhausting exams.

In times like these, where does one turn for a bit of relief?

Why, creature comfort, of course!

That’s where Marius the cat comes in. Junior Erin Leone adopted Marius from the Macon County Animal Shelter in mid-2020, and since then, he has provided much-needed affection and distraction from academic life.

“I struggle a lot with, like, I have so much energy that I need to put it somewhere,” said Leone, an Instrumental Music Education major. “And I think just taking care of a cat has really helped me focus less on the stress that I’m experiencing.”

For Leone, cats have always been important companions throughout her life, but the restrictions brought about by the pandemic only further stressed their importance.

“One of the ways to relieve my stress is by having a cat or petting some type of animal…and over the pandemic, my family adopted two kittens that we basically raised from five weeks,” Leone said. “That helped me a lot when I was having a lot of trouble just being at home and alone during the COVID pandemic. When I got to campus, I realized how much I relied on that as a way to soothe my anxiety and bring it down to a level, so I decided that it would be important for me to have a pet here on campus; and that’s when I started looking for Marius.”

In the midst of increasing stress and burnout, Marius’s playful and caring personality has provided a much-needed change of pace for Leone and her roommates.

“I think he is the most well-behaved and caring cat that I have ever met,” Leone said. “This is the first cat that has actually sat in my lap and has let me pet him when I need to. A lot of the cats I have had previously are very self-reliant, they just do whatever they want, and you can interact with them on your own time. But Marius craves attention. Also, he has a very playful attitude, especially in the morning, so it’s really fun to play with him.”

Marius is an Emotional Support Animal, and he is trained to help with anxiety and stress. As he started clawing at my sock, I asked Leone to give me the rundown of the pros and cons of owning an emotional support animal.

“Pros: they’re just really helpful for a lot of things, and it’s really nice to have an animal in the house,” Leone said. “They just really provide an energy that’s really calming, and especially if you have a lot of depression, having an animal that does care about you…Another pro is that he is an Emotional Support Cat for multiple people besides just myself.”

At this point, Marius’s claws were really digging into my toe, so Leone had to shoo him for a minute.

“Cons: Obvious cons of owning a pet, they can be expensive. Food and litter and supplying what they need, and vet visits,” Leone said. “Sometimes you have to go through a lot of trouble justifying why you need a support animal, which is really hard because…it’s hard to explain to someone why you feel the way you do and what helps you deal with that anxiety and depression. I think that, if they don’t experience that themselves, they may not understand.”

As for Leone, however, the difficulties are well worth it considering the benefits.

“We have developed a really strong bond, and I know he can tell when I’m stressed ‘cause he likes to come up to me and let me pet him during that time,” Leone said. “Also, it’s brought a lot of comedy into our life and into our apartment…he just runs around like a crazy cat.”