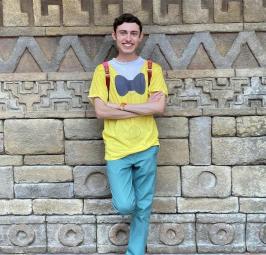 From Millikin to Magic Kingdom

Dreams really do come true with Disney, especially for Alex Saviano. The senior BA Theatre and Performance Studies major will be attending the Disney College Program in the summer of 2022.
The Disney College Program is an opportunity for college students and graduates to work at Walt Disney World in Florida for a summer.
“I get the chance to apply things that I have learned in college or take classes and get my foot in the door with what it’s like having a career,” said Alex. “I’ve known about the college program probably since I was like 11. I’ve always loved Disney and the thought of working for them is just something that is a calling for me.”
The Disney College Program entails a variety of assignments, including operating rides, retail, food service and concierge at hotels. In the application process, Alex chose his top choices, which include retail and concierge. He is a perfect candidate for these positions, considering his background with Disney retail at a Disney store in his hometown of St. Charles, Illinois.
“I worked for three months over this last summer,” explained Saviano, “and then sadly they had to close down because Disney decided they didn’t want physical Disney Stores anymore. But it was a really, really great experience. I loved everyone I worked with and everything about the store. It was really the best job and I am so looking forward to working for Disney again.”
Initially, Alex was worried that he had not been accepted into the program, after no response for weeks.
“Once I submitted the application, it was a waiting game to see what happens next. Eventually, I got an email saying ‘Your application has been received. You will know within 72 hours if we want to move forward with you and if we want to move forward, we will have an interview.’ Then, two weeks passed and I never heard back so I assumed that I just didn’t get accepted. On a random Monday – I don’t know what Monday – I got an email saying that I was just accepted.”
Alex says that he received the good news while at work, and was quite surprised to hear back from Disney.
“When I got the email that I was accepted, I was completely taken aback because I didn’t think it was real. I thought that maybe they’d sent it to the wrong person. I was at work and I showed my coworker the email. I’m like, ‘Please tell me this is real.’ Then I proceeded to freak out for a solid four to five minutes, calling my parents and texting everyone that I know. I still don’t really believe it’s real and knowing that in five months I’m going to be moving to Florida to work for Disney, it’s very surreal.”
Moving from Illinois to Florida is a factor that has drawn Alex to the Disney College Program.
“I’m very excited to get away for a little bit. I am also interested in trying something new and to see what kind of jobs I’m given. It’s been four years of intense theater work at Millikin and I am ready to take a step back and do something different for a hot second. Then when it’s all said and done, I can come back to the theater, which is my career.
Alex, who has visited Walt Disney World 13 times, says that Disney is one of his biggest inspirations.
“One of the most fascinating things to me about Disney is that when they need something and if there isn’t anything created, they just invent something. I think it’s the coolest thing in the entire world. That’s why I love them. There is so much drive to get done what they want and I just think it’s so fascinating. So at the end of the day, Disney is all about storytelling. Disney is the reason I even started majoring in theater because I love storytelling so much and I want to keep telling stories.”