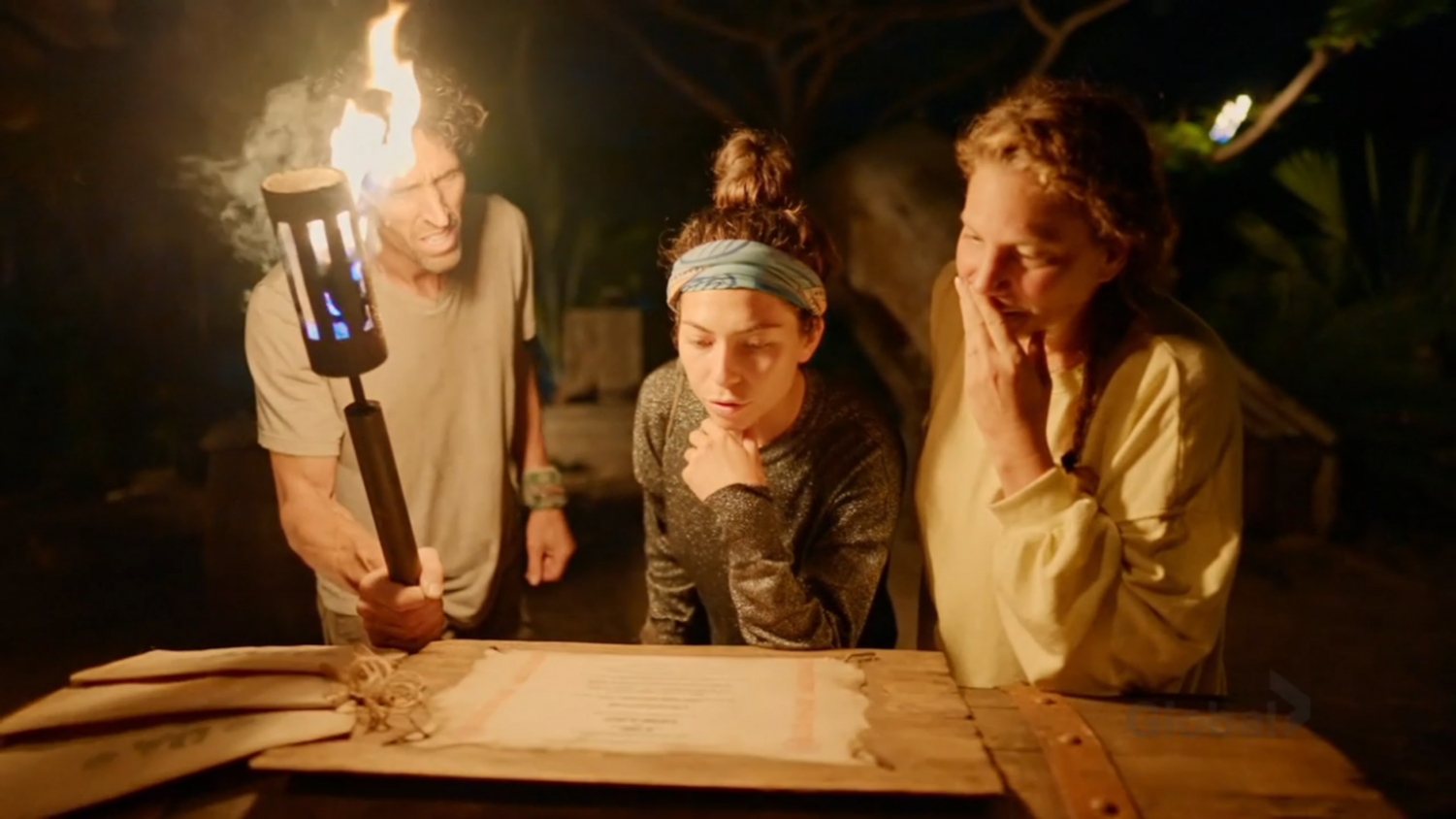 Fire in the Form of Print: Survivor 41 Episode 3

What a strange little episode this was…

A common complaint about the state of modern Survivor is that there are simply too many advantages. These complaints came to a head when, in Survivor: Game Changers, a player with no votes cast against them was eliminated by default for not having any advantages in their pocket.

It would seem, however, that Probst and the rest of the producers have not only elected to ignore these criticisms, they have chosen to double down on the number of twists, secret powers, and advantages in play for Survivor 41.

Much of the first half of this episode was dedicated to yet another new twist, in the form of a second Beware Advantage:

Unlike the previous Beware Advantage, which was actually hidden, the new Beware was set right in plain sight. Interesting…

In the meantime, we see the Luvu Tribe (finally!) and watch as tension continues to brew under the surface. Sydney is double-dealing, running information from Naseer directly to Danny and Deshawn. Naseer, to his credit, sees right through her manipulation, but Danny remains his primary target.

Meanwhile, on Ua, JD has been scouring the island for a Hidden Immunity Idol, and is beginning to suspect one may already have been found. Unbeknownst to JD, however, Brad has already located the same Beware Advantage which Xander found last week! This means that Brad is subject to the same punishment: no vote at Tribal Council until his idol is activated.

Tiffany finds the Beware on Yase, Brad finds it on Ua, and Sydney finds it on Luvu. Each of them manages to board the boat in time (though, for good measure, Brad creates the least convincing “fake Brad” I’ve ever seen, then proceeds to put it in his sleeping spot).

Once the three arrived at their destination, they were faced with what has become a staple this season, another Prisoner’s Dilemma!

I’m not sure what prompted the rule change from the last Prisoner’s Dilemma they presented (for the last two weeks, there was no penalty for choosing the safer option), but, regardless, the three tribe representatives–Tiffany, Brad, and Sydney–all begin discussing the best course of action for navigating this twist. Tiffany tries to convince Sydney to choose the tarp, so that she and Brad can both receive a Steal a Vote, but Sydney is hesitant, making it clear to the audience that she doesn’t fully trust Tiffany.

We then proceed to the challenge, where, as expected, the Luvu Tribe continues to dominate. However, out of nowhere, the Yase Tribe manages to pull it together and finish second, earning immunity for the first time all season! The Ua Tribe places last, in no small part due to JD completely whiffing the bag tossing portion of the challenge, and are set for a visit to Tribal Council. Jeff also proceeds to confiscate their flint.

The Luvu Tribe remains the most underrepresented in the edit, largely due to their perfect competition record. Though they tied with Yase in terms of total confessionals this episode, three of the tribe’s members–Danny, Erika, and Heather–each received none. Deshawn and Naseer each received a single confessional, largely due to their deepening conflict. Sydney was the focus of the Luvu Tribe this episode, receiving 3 confessionals, thanks to her Beware Advantage journey as well as her desire to eliminate Naseer.

After nearly uninterrupted airtime throughout the first two episodes, Yase is largely on the periphery of this episode. Evvie, despite their immense presence early on, received no confessionals, as did Xander. Liana received two confessionals, mostly focused on how upset she was that she couldn’t sway Tiffany away from voting against Voce in Episode 2. Tiffany, thanks to the Beware Advantage, ended up with five confessionals, and also gave what I think was the best quote of the entire episode:

After failing to secure a victory at the challenge, the individual members of the Ua Tribe begin to plot for Tribal Council. Brad wants JD gone, and JD wants Brad gone. Brad pulls in Genie.

There is also one added wrinkle: Brad still can’t vote.

Despite Brad and Xander both reciting their code phrases at the challenge, nobody from Luvu responded, leaving both of their votes held hostage.

This means that, in order to guarantee his safety, Brad has to convince both Shantel and Ricard to vote against JD.

Shan is trying to base her decision off of trust. Unfortunately, JD makes an almost game-ending blunder in this regard when he leaves his Extra Vote power sticking out of his pants, in full view of everybody. Shantel confronts him about this, telling him that she feels betrayed by the fact he didn’t trust her enough to tell her about his power.

To try to earn back trust, JD agrees to give his Extra Vote to Shan, at least until Tribal Council. This, coupled with JD’s willingness to do whatever she tells him to do, helps smooth over some of her concerns. Still, she is grappling with the decision, begrudging the fact that she got so emotionally invested in her tribemates.

Then, we get to Tribal Council. Fortunately for the tribe, their second visit proved far less chaotic than their first. Nobody whispered into each other’s ears, there were no last-minute plans or deals; instead, it was the usual fare of people talking about “honor” and “alliances”. JD discusses his concerns that he’s lost people’s trust, and his tribemates agree.

JD began to tell a sob story, just like Voce did last week, discussing how people like Ozzy (from S13) and Malcolm (from S25) were like heroes to him, inspiring him to come on the show.

Finally, we get to the vote:

Believe me when I tell you I was FLABBERGASTED!!! As soon as JD began talking about his childhood, I was certain that the editors were queuing us up for him to go home. This, of course, left me surprised that Brad ended up getting axed, with both the Steal a Vote and the Idol Fragment in his pocket.

This episode was the Brad show! Brad received 10 confessionals, the most of anyone in Episode 3, which made it all the more confusing when he was eventually voted out. Shantel was next, with 6 confessionals, largely devoted to her indecision before Tribal Council. JD received 4 confessionals, dealing with his idol hunt and his pre-Tribal scrambling. Genie and Ricard both only received 1 confessionals, and I don’t even remember what they were about.

Episode 3 was a weird one. I felt a bit disoriented by the sheer volume of advantages at play, and yet, despite all of that, I still ended up enjoying the episode. I wish we could’ve seen more of Luvu, but judging by the “Next time on Survivor…” segment at the end of Episode 3, I shouldn’t have to worry about that for much longer.

Thanks for reading, and I’ll see you all next week for Episode 4, “They Hate Me Because They Ain’t Me”.