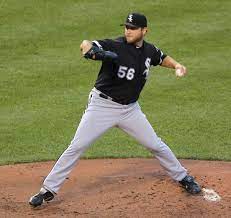 My Cousin, the Major Leaguer: Following in Mark Buehrle’s Footsteps

My name is Caleb Buehrle. I’m a senior pitcher on the Millikin baseball team. You may have heard my last name before, especially if you’re a fan of the Chicago White Sox. My cousin is Mark Buehrle, a former pitcher for the White Sox, Marlins, and Blue Jays during a 15-year major league career. He had his number retired by the Sox in 2017, and he is currently in his 2nd year on the Baseball Hall of Fame ballot.

He’s a man I’m proud to share a last name with. His lasting legacy in this game—beyond the speed at which he worked, the perfect game, or closing game three of the 2005 World Series—is that he was an incredible teammate and person. I’ve seen all of these things to be true with my own eyes, too.

He and my dad were really close. My dad loved how humble and genuine he is, and they would meet up for a drink whenever they could. Mark would do things for us that not every major leaguer would, taking time out of his day to share a little baseball with me and my siblings, all of us being kids who absolutely loved the game.

Often when people find out that I’m related to a borderline Hall of Famer, and especially when a Sox fan finds out, a flood of questions immediately follow. Most of them end up in disappointment for the person asking.

“So did he teach you how to pitch?” Negative. I wasn’t even a pitcher until after he retired.

“Is he coming to a game?” Probably not.

I don’t blame people for asking. Hell, I probably would too. But the reality of life as Mark Buehrle’s cousin hasn’t exactly been what people probably imagine it to be. So here’s the story, as best I can tell it.

Like I said, I’m not a lefty, nor was I born with the talent that one would associate with a Major Leaguer. That would be my brother. If either one of us was picked as the golden arm of the two brothers, it sure as hell wasn’t me. I was stuck behind the plate as a catcher even though I wanted to be a pitcher from day one of my career. My brother, on the other hand, was always the best pitcher on the best teams in the state of Missouri as a kid. The kid had the talent, man. It just wasn’t what he wanted to do for the rest of his life, and that’s perfectly okay.

Me, on the other hand…this is all I want to do.

Baseball has been the only thing in my entire life that has ever made sense to me naturally. I’ve always had a tough time in school, going all the way back to when they were teaching us to do multiplication. I never even learned to ride a bike, in all honesty. Baseball, though, was mine. While most kids my age were watching “SpongeBob,” I watched videos about Bob Gibson and the St. Louis Cardinals. I grew infatuated with a game I’d only just met.

I have Mark to thank for that, too. As a kid, we all have dreams about what we want to be. Some of us dreamt of being doctors, or astronauts, or veterinarians, but for me the only thing in the world I had my sights set on was to be a baseball player. Seeing Mark on the TV wearing my last name on his jersey, and wearing the same number that I wore, stoked an already burning fire in me to follow in his footsteps. He made me believe that I could.

I really don’t have much of a relationship with him, however. That’s no one’s fault, per se—I just haven’t necessarily reached out. Mark is a great man, and I’m sure that if I did reach out, he’d be more than willing to help me with anything baseball-related.

Like I said earlier, he and my dad were close, and I got to know him a bit through that. When my dad passed away in 2017, though, I didn’t really have much of a connection to Mark anymore. If that’s anyone’s fault, it’s mine for not reaching out. He’s got his own family and his own kids to take care of. After a 15-year major league career, I’m sure he’s enjoying being able to be a full-time dad. Lord knows I’d give anything to have my dad at one of my games today, so I don’t want to take away from those priceless moments with his own kids just to see me pitch. If I did ask though, I’m sure he would.

To be honest, that goes for just about every Buehrle. It’s a huge family, and one that I’m damn proud to be a part of. Mark’s father John would routinely text my mom telling her to congratulate me for him after a good start, as well as a plethora of aunts and uncles and grandparents.

I’m blessed to call Buehrle my last name, and I’m grateful for the legacy and example Mark set for me during his career. I’m working every day to follow in his footsteps, and I hope one day I’ll be able to make good on a lifelong dream to play this game at the highest level.

Until then, I’ll do everything I can do to represent the Buehrle name with pride at Millikin