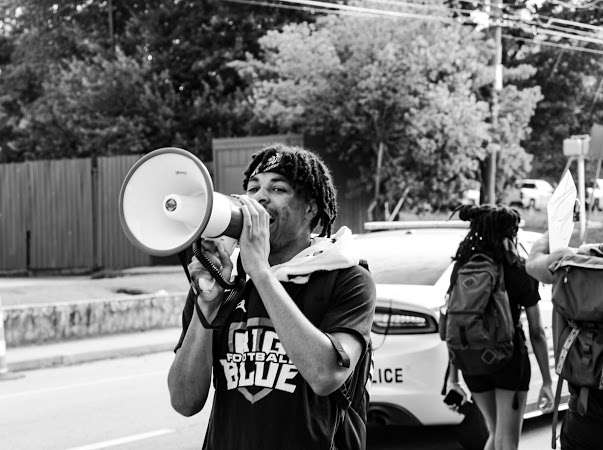 The intersection between sports and activism isn’t new.

Nowadays when we think about it, we envision Colin Kapernick, who took a knee during the National Anthem to show support for the Black Lives Matter movement, or we might even go back further in history to Jackie Robinson when just he being who he is, playing a sport with those of another race was seen as an act of defiance. As we continue to face the woes of racial inequality more and more, athletes of all backgrounds, in all divisions are stepping up outside of their respective sport to represent themselves not just an athlete but an activist. Millikin University student-athletes are no different, including our special athlete spotlight for this edition- Jourdan Cooper.

Coming from Georgia to the midwestern state of Illinois, was a culture shock when he first arrived his freshmen year.

“The biggest thing was some of my favorite foods.. It wasn’t just the same, some of my favorite [I miss] would have to be Chic-Fil-A or Zaxby’s. there were little things like slang that was different I had to get used to last year, but for the most part, it has been an easy transition.”

His freshman year proved to be another shock as he learned the lesson is being humble and humility, “Its kick of a shock when you get to college..you get on the teams with a bunch of seniors who have been here all four years and worked hard to get to where they are..it was a wake-up call.”

The second part of his freshman year is when the coronavirus hit, and it seemed to stop the world in an instant. However, for Jourdan, it would be time for him to take the lead off the field.

That next summer he held a protest of 500 people in his hometown of McDonough, Georgia- after only two days of preparation.

With huge support from the community, who provided resources to make the protest as successful as it was, Jourdan was able to put together an event that resulted in the removal of a confederate statue.

He wanted to make a stable in his community- which is predominantly white- and let black people in his area know: “We are here, we’re black.. A lot of people feel like they’re alone, I just wanted to show them that we are here.”

He also makes a point to be politically aware, and as a young leader himself, he recognizes the importance of the youth turning out and not just the presidential elections, but local ones, saying that issues they are voting on will impact them more than people who are older as they are the ones living and working every day.

The lessons Cooper has learned in football transfer over into life, he says, “One of my coaches always talks about overcoming adversity and so many times in life we have to face obstacles. I think football has a good way of showing us how to overcome and keep going no matter what happens.”