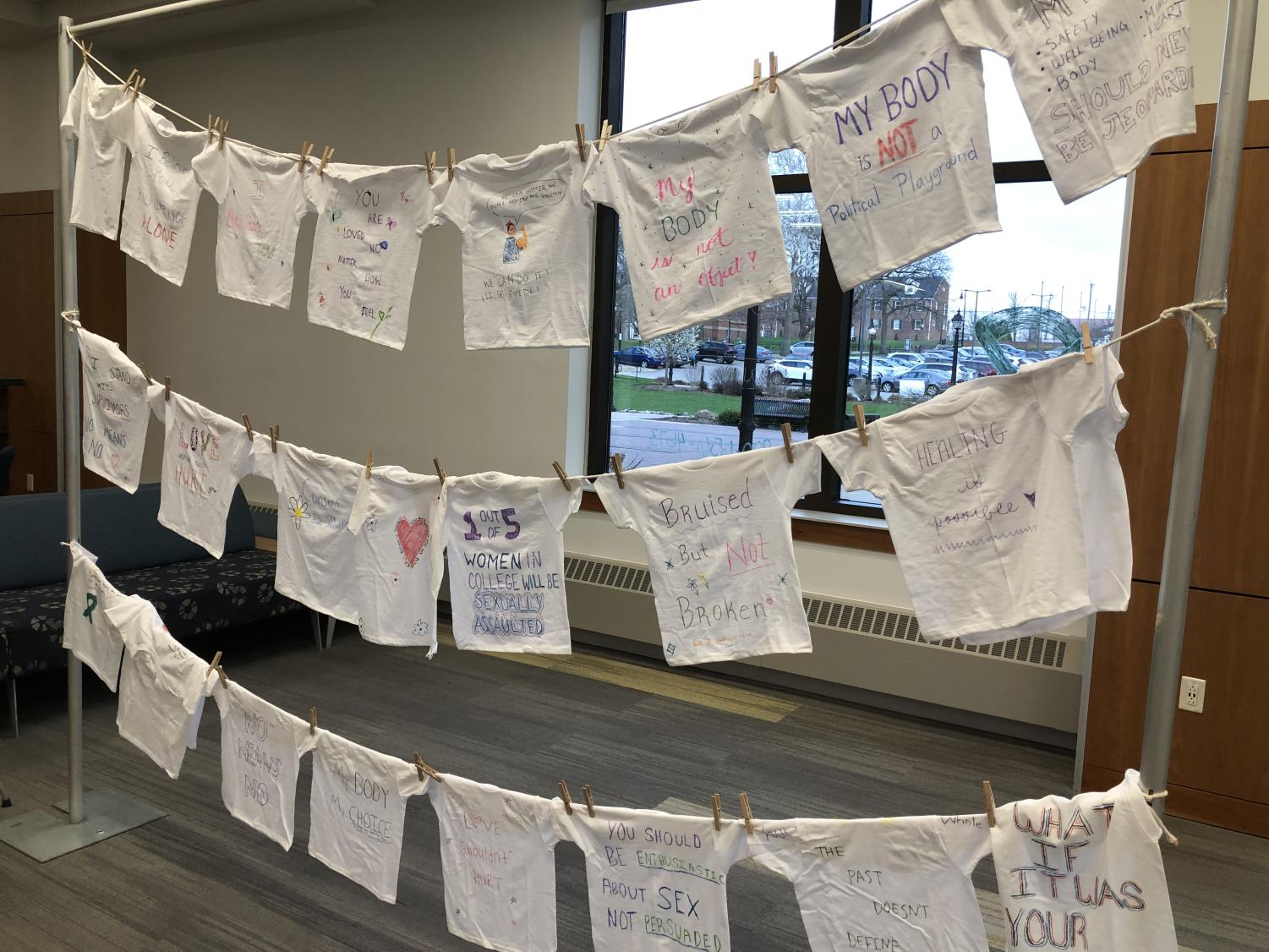 The Clothesline Project display at Millikin. Photo by Sydney Sinks.

The Clothesline Project display at Millikin. Photo by Sydney Sinks.

Warning: This article contains discussions of sexual assault that might be upsetting to some people.

“This is an opportunity to move our attention from, ‘Don’t have sex in a way that breaks the law,’ which is a pretty low bar,” Dr. Jennifer S. Hirsch said to an audience of Millikin students and faculty. “But how about ‘Be a good person while you’re having sex.’”

To kick off Millikin’s Civic Discourse Week, Hirsch came to Millikin on April 11 to talk about her book Sexual Citizens: A Landmark Study of Sex, Power, and Assault on Campus.

Hirsch, an anthropologist and professor at Columbia University, discussed the views that many college students have about sex and sexual assault, and she highlighted changes that can shift this cultural mindset.

“This is a moment when institutions can move from a compliance mindset. Tell students not to rape other people and make sure that there’s basic resources available for adjudication…that’s a compliance mindset, to a transformation mindset, which is to actually do something about preventing the problem,” Hirsch said. “And that requires a much more ambitious approach, a much more imaginative approach.”

Civic Discourse Week is an annual tradition that invites the Millikin community to start conversations about current events and global issues. Now in its sixth year, events are scheduled throughout the week of April 11–14.

After many conversations about sexual misconduct on campus last semester, this year’s theme is “Voices and Advocacy: Supporting Survivors of Trauma.”

Raphaella Prange, Millikin’s vice president, spoke with Hirsch in front of a full audience of students and faculty. They noted that 13% of all undergraduate and graduate students will experience sexual violence, according to the Rape, Abuse, and Incest National Network (RAINN).

Hirsch believes that the book, cowritten with Shamus Khan, is a chance to shift our outlook on sexual assault as not simply a part of college life, but a more pervasive global issue.

“I think we really have done what we set out to do, which was to change the conversation nationally around campus sexual assault and reframe it as a public health issue…and to move attention upstream towards prevention and towards a much more ambitious vision of what prevention should look like,” Hirsch said.

The book explores three main themes: sexual citizenship, sexual projects and sexual geography. Hirsch explained that thinking about sex in these ways can give us a new perspective on why and how people have sex, which also helps us understand sexual assault.

Sexual citizenship is the keystone of Hirsch’s studies. This idea advocates for sexual agency.

“People have the right to choose their sexual experiences,” Hirsch said. “And—and this is the important part—you have to understand that other people have that same right…In the world that we want to live in, you must acknowledge other people’s sexual citizenship, and we would like you all to feel recognized for having the right to choose your own sexual experiences, too.”

While writing the book, Hirsch and Khan interviewed several Columbia students and found that most students chose to have sex for a few key reasons. These reasons are what Hirsch calls “sexual projects.”

“Sexual projects answers the question of what sex is for, which, you might think, ‘Only a bunch of professors would ask what sex is for. Everyone knows what sex is for,’” Hirsch said. “In fact, in college, a lot of it is not for pleasure.”

Instead, the researchers found that many students have sex in an attempt to figure out their own identities. Others had sex simply to get more experience, or to use the sex as a bragging right. More rare, Hirsch said, was people having sex in the context of a relationship.

To explain sexual geography, Hirsch told the story of a student who traveled off-campus to see a man because she didn’t date much at her mostly-white university, then was raped by the man. Hirsch notes that if the student had money for an Uber, if she had more reliable transportation, if she hadn’t felt the need to go off-campus to socialize in the first place, the assault might have been avoided. Sexual geography acknowledges how the spaces and socialization on a campus shape sex and sexual assault.

Hirsch often has conversations with students who identify with Sexual Citizens in some way. But parents and college administrators make up the majority of the book’s audience. Hirsch hopes that the book helps these adults understand the challenges that college students experience.

“I think we want the reframe to go from, like, ‘Be afraid, be very afraid,’ to, ‘There are actually a lot of changes that we can make,’” Hirsch said. “And to see that we can’t effectively move forward without talking about power. And not just gender-based power, but all of the power inequalities”

Hirsch spoke about the power dynamics that are embedded in college campuses, from the age difference between an upperclassman and a freshman to the imbalance of a queer campus leader dating a closeted student.

She also told the story of a Black male student who went to extreme lengths to document that his sex with a white woman was consensual just in case he was accused of assaulting her, highlighting the racial dynamics that lead to a power imbalance.

Hirsch compared these different dynamics to driving down the highway in a Hummer while the people around you are on bicycles, and she encouraged students to be aware of their own power and how they wield it in every dating/sexual situation.

While the conversation focused on sexual violence in college, Hirsch and Prange agreed that prevention starts long before students come to campus.

Hirsch believes the first step to preventing sexual assault is to educate kids from a young age about personal space, consent and their own anatomy. During the event, Prange asked the audience to raise their hand if they felt they had received a comprehensive sex education before coming to college. Approximately five students raised their hands.

“That’s the thing that we frequently say to students: If you’re angry, look beyond your campus,” Hirsch said. “You should be angry at the people in the statehouse, because the people who arrive on campus are lacking in skills because people have betrayed them. They failed them. And so that’s not a campus failure; that’s really a political failure.”

Hirsch believes in comprehensive sex ed. that discusses consent acts like a “sexual assault vaccine.” She encouraged people to be aware of new legislation that could affect how we view sex ed. and sexual assault.

But other legislation could have the opposite effect. One student asked Hirsch about Florida’s recently passed “Parental Rights in Education” bill. This bill, dubbed the “Don’t Say Gay” bill by critics, prohibits public school teachers from talking about sexual orientation or gender identity in K-3rd grade classrooms.

Additionally, conversations about abortion rights have intensified with the Dobbs v. Jackson Women’s Health Organization court case that is currently before the Supreme Court. The court’s decision has the potential to roll back Roe v. Wade, the court case that legalized abortion in 1973.

“All of that legislation is pro-sexual assault legislation,” Hirsch said. “It’s all laws that systematically oppress people in ways that make them vulnerable.”

Hirsch and Prange both encouraged students to contact their representatives and advocate for the changes they want to see.

The response from students who attended the event was overwhelmingly positive.

“I was literally floored,” sophomore Kayla Green said. “It was like she took everything out of my mind. It was just her honesty and, I think, her open-mindedness really makes her points easily conveyed.”

Green, who introduced Hirsch at the beginning of the event, has been an active part of these conversations at Millikin. Along with a few other students, Green organized last semester’s Sexual Assault Awareness Week. She is currently helping to plan two upcoming Take Back the Night walks, which are rallies against sexual violence. One of these walks is on Friday, April 14 at 7 p.m. in downtown Decatur; the other is on Wednesday, April 20 at 7 p.m.

Other students appreciated Hirsch’s methods along with her message.

“It was one of the first conversations I’ve heard about sexual assault that wasn’t triggering,” student Taylor Alstott said. “As somebody who’s experienced these types of situations before, I think it’s really awesome to have somebody come in with an academic standpoint…and be focused more on the change and advocacy rather than just awareness.”

Prange pointed to the tangible changes that were discussed. She hopes that the event will serve as a “kick-start” to conversations that look at campus safety in a different way.

“I’m really looking forward to some of the students who came tonight, along with the faculty, for us to get together over the next few months and design some changes that would help us take this new approach,” Prange said.

Some of these changes will include increasing conversations about sex and consent during New Student Welcome Week, so incoming students will receive some of the sex education that they might have missed in high school. Prange also wants to strengthen Millikin’s relationships with community agencies and survivor support services.

Beyond this, Hirsch also encourages school administrators to think about how students socialize. Prange pointed out that most dorm rooms offer no other place to sit besides the bed, which can lead to implications. Additionally, young students often look for socialization at parties hosted by upperclassmen or off-campus, where they can find themselves in unsafe situations.

“How can we change spaces to make them less vulnerable to creating or welcoming sexual violence?” Prange said.

Prange is interested in how Millkin can implement some of these ideas.

“I think baby steps, right?” Prange said. “Obviously, there are small things we can do right away. Other things will take funding and time and human resources. But we’re really committed to focusing on that sexual education conversation during New Student Welcome Week…and I’d really like to dig into this conversation of how to stop pushing some of the socialization to these cornered and darker spaces and putting it out in the open. So I think that’s going to require a longer conversation, but it’s worth having because we don’t want to inadvertently be causing harm.”

Administrators and students hope that Civic Discourse Week will spark some of these conversations. Ultimately, Green encourages students to make the most of the week’s events.

“Get out, have your voice heard. This is the week for that,” Green said. “It’s not even just a week—it has to be a lifestyle going forward.”

If you or someone you know needs support, you can call the National Sexual Assault Hotline at 1-800-656-4673. There are also resources on campus and in the Decatur community, including the Growing Strong Sexual Assault Center and Heritage Behavioral Health Center.