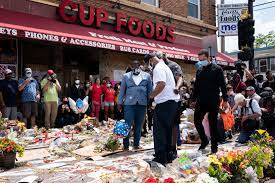 After his murder in May 2020, George Floyd became a headline, a household name, and the face of a movement. But for Terrence Floyd, George is simply the older brother he loved and lost too soon.

Almost two years after George was murdered by Minneapolis police officer Derek Chauvin, Terrence is the founder of the nonprofit We Are Floyd and a board member of The George Floyd Memorial Foundation, Inc. His work is committed to community service, anti-racism activism and honoring George.

During a moderated discussion at Millikin on Tuesday, Feb. 2, 2022, Terrence reflected on his life after George’s death.

“I’ve chosen to change my tragedy into triumph,” Terrence said to applause.

Terrence’s appearance was part of Millikin’s Black History Month programming. This event was spearheaded by Nikki Garry, the Director of Campus Life for BIPOC Student Support. Student leaders Raeven Carroll and Serron Pettis moderated the hour-long conversation, which spanned topics from the Floyds’ relationship to Terrence’s activism and hopes for the future.

George’s murder sparked a surge of protests in support of the Black Lives Matter movement. It also triggered global conversations about police brutality and systemic racism. Terrence attributes this reaction to the COVID-19 pandemic and the widespread coverage of his brother’s death, including the viral video of his murder. He said he found out about his brother’s death after watching this video.

Terrence encouraged audience members to remember his brother and other Black people who have been killed by police and didn’t receive the same media coverage as George did.

Throughout the conversation, Terrence answered many questions about his relationship with his brother. Students agreed that this gave them a greater appreciation of who George was as a person.

“A lot of times, those things may happen, but we may not think of the family that it’s happening to,” student Mariah Crawford said. “We may think of when our loved ones die, but we don’t look at it as a thing of, ‘Oh no, this is a person that passed away, that was killed in police brutality, and we have to fight for the change that we want to see, but also, how are we looking out for the family and how do they feel?’ And I think he gave that great perspective of how they felt when this happened, so now we can look at it as a more humane way and not just something as a topic to discuss.”

Because George’s murder has received international attention, Terrence acknowledged that people have analyzed George’s past and questioned his actions. Terrence told the audience to consider their own lives and mistakes. He said that George was participating in programs and learning how “to live for [him]self” before his death.

In addition to talking about George, Carroll and Pettis also asked questions about Blackness, racial progress in America, and ways to be good role models and leaders for younger generations.

Terrence said that progress is moving slowly, but he is happy to see the changes that have arisen in the past few years. He also pointed out that many inventions and achievements by Black people have been erased from history, and he encouraged Black people to fight this invisibility.

Terrence also addressed the Black Lives Matter movement. He said that he agreed with the idea behind the movement, but he wishes the organization would do more. He also talked about his community projects and collaboration with police officers. He said that this has resulted in some backlash, but he remembers that he used to have positive relationships with police officers when he was younger, and he wants to see that unity again.

“I really want to bring that narrative back, because that’s one of the things We Are Floyd focuses on, is bringing the narrative back about positive, peaceful unity,” Terrence said.

After the event, many audience members agreed that Terrence’s appearance at Millikin was impactful.

“I thought it was lovely,” audience member Sam Smith said. “And I thought it was surprisingly kind, and thoughtful, and probably an important part of what we need right now.”

“I feel like it brought topics that often aren’t talked about on college campuses about racial injustice and things that are happening in our community,” student Cleah Roberts said. “It gave perspective to a wider audience that we probably wouldn’t see as often if he hadn’t been here.”

As the conversation came to a close, Terrence spoke about his brother’s legacy. He said that George often said, “I’m for you.”

“He used to tell me that,” Terrence said. “So that’s the legacy I want people to understand, that he was for you. Because he wanted you to keep it pushing. He wanted you to live your life.”