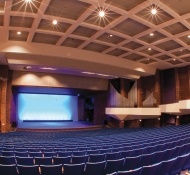 He deeply regrets those remarks.

Several days later, Carlson is responding to the pushback he has received.

“I am so grievously sorry that there has been stress, conflict, anger, all of those emotions that have come out because it’s something that I said,” Carlson said.

Carlson’s speech began when he pretended to take a phone call from God. After he pretended to end the call, he talked about God’s gender before delivering the rest of the invocation.

“Alright, well, I don’t know how he got the number but that was [God],” Carlson said. “And he wanted to say a few things. First of all, let’s take care of the gender issue. He understands and he is sharing with you that there is no theological justification for it, but he is choosing he/him today. Doesn’t like them/they. Just because this is probably irritating enough people that it is coming out this way, we are going to stay away from she/her.”

Pushback began immediately after Carlson was done speaking, as a few professors walked out of commencement. Many students have taken to social media to express their anger at Carlson’s remarks.

In the hours following commencement, Millikin President Jim Reynolds and Provost Mary Black sent an email to students apologizing for Carlson’s comments and promising to vet future speeches before they’re delivered at events like commencement.

“Please accept this heartfelt apology from myself, Provost Black and all at Millikin University for the comments made by Reverend Carlson in the invocation at the ceremony today,” Reynolds wrote in the email. “His comments regarding gender do not reflect nor represent the values of our university. We were not aware of his remarks prior to the ceremony and were surprised and disappointed by them, just as many of you were.”

On Dec. 15, Carlson was removed from Millikin’s Institutional Review Board.

Looking back, Carlson says he would not have made the statements he did.

“I would not have said anything at all about gender pronouns,” he said.

Since making his comments on Sunday, organizations Carlson is affiliated with have received a flood of negative emails, including his church.

While Carlson believes his statements on gender were the wrong thing to say, he thinks that the intended message of his invocation was lost.

Carlson says that he does support the LGBTQ+ community, and he has for a long time.

“That kind of judgment is not who I am,” he said, referring to the pushback that his comments have received.

“Whatever wounding I did to anybody, I want the healing to happen, and I am willing to do whatever I need to do to make the healing happen,” Carlson said.