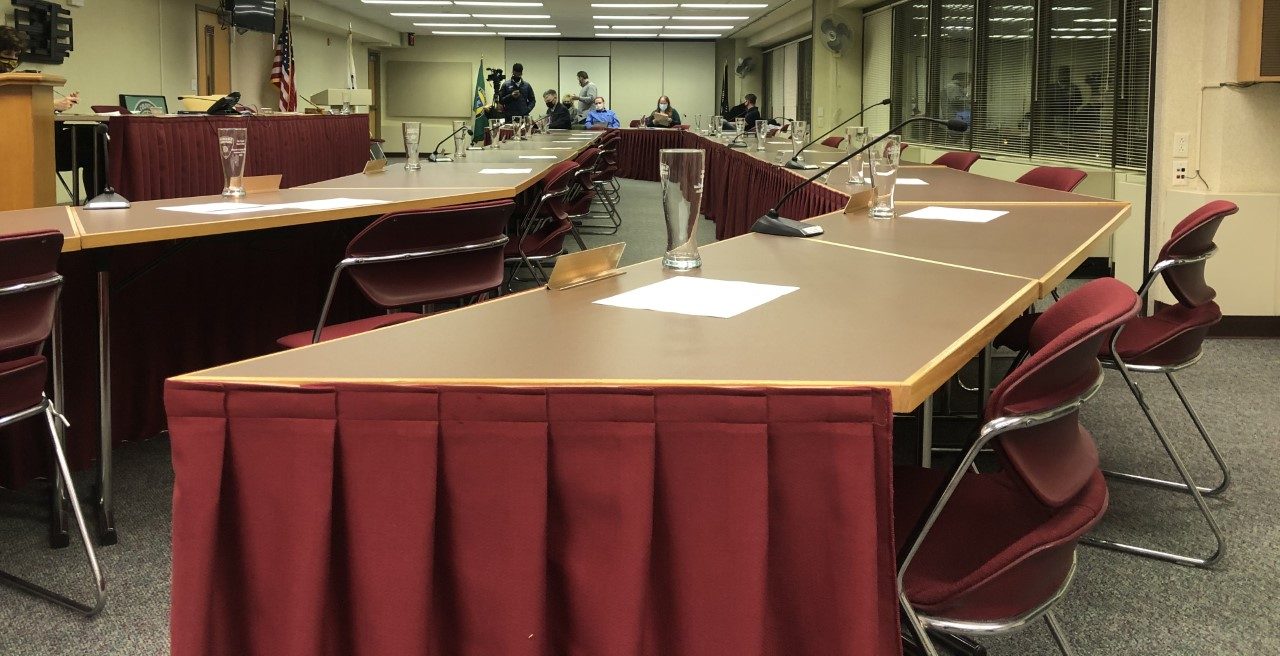 A hasty decision by the Macon County Board could have unintended and profound consequences.

It was a tense debate between local businesses vs. public health: livelihood vs. life.

The Macon County Board was voting on whether or not to change the ordinance banning sit-down dining. The motion would also strip the ability to suspend or revoke food licenses for coronavirus-related offenses from the Macon County Health Department.

Despite ten people coming forward at both a subcommittee meeting on Jan. 12 and the Board Meeting on Jan. 14 to oppose the change, the motion passed 12-9.

Now, the entire landscape of coronavirus health regulations, enforcements, and grants could be changed.

For those ten people, this was serious. For Board Member and Millikin Professor Dr. Laura Zimmerman, it was also heartbreaking.

As she thought about what this meant for Millikin students, tears came to her eyes.

“You know, I was so proud of Millikin this fall—of all the students,” Zimmerman said. “I’m going to be honest, I completely underestimated you guys. You were so responsible. It went so much better than I thought it would and every time I saw students they had a mask on, they were distancing.”

“You guys sacrificed,” Zimmerman said. “And I wish the community could see that or recognize that and just be willing to do what it takes. And now we’re [Macon County] just going to, you know, put a bigger burden on Millikin students. We’re [Millikin] just going to have to be more careful, and think about how we’re interacting with the city in this county—even more than we are.”

Zimmerman voted against changing the ordinance. When Board Member Patricia Dawson suggested a motion to table the decision, Zimmerman also voted to table the motion.

“I just don’t think it’s a fair proposition to expect us to do this and make a decision,” Dawson said. “I think we should have had adequate time to see it, to look at it to ask some questions. And we were not afforded that. And I don’t know why we have to do everything on the fly. But why did it have to be done tonight? That’s my first question. What’s the rush?”

The decision to change the ordinance came into public view this week. The first time citizens could voice their support or opposition was to the Environmental, Education, Health and Welfare (EEHW) Committee, a subcommittee of the Board, on Tuesday, Jan. 12.

Zimmerman argued that the Board did not have the time nor the data to weigh all the issues. The trade-off—the possible benefits of reopening early—is also still unclear.

“This resolution was given to us, well, now it’s been eight hours ago, but five hours before our caucus,” Zimmerman said at the Board Meeting before voting took place. “And the only reason why we even had five hours to look at it is because I sent this out. I did that. And we have five hours to make the most important decision—let’s be honest—that any single one of us will ever vote on ever, because people’s lives are in the balance. And so are their businesses. And I don’t understand how we can make this decision.”

Debbie’s Diner owner Debbie Hill and Texas Roadhouse owner James Gentry were the two business owners who spoke in support of the ordinance change in the citizens’ remarks.

One of the key arguments was that surrounding counties such as Sangamon and Champaign, which have a lower hospitalization count per capita, have been able to re-open.

“But we should do it safe,” Gentry said, turning to the other restaurant owners who attended the EEHW subcommittee meeting. “Well, last thing, I want to say sorry…And my colleagues and my other restaurant owners over here might be affected by this. And I’m sorry, if you are. But I think it should be regulated by the health department.”

The restaurant owners also felt that the statewide order singled them out, as opposed to different types of businesses. In response, several individuals argued that the requirement for masks to be off while eating and the possibility of asymptomatic spreading of the virus makes restaurants different from other small businesses.

The decision to move forward with the change, for some, was not a surprise.

“I’m extremely disappointed but unsurprised,” Drew Laney, one of the individuals who spoke to oppose the rule change, said after the meeting. “I would say that these people just care about money. And that’s really the bottom line. So I realized later than sort of everybody else that the choice was between lives or businesses. And they finally chose businesses.”

The decision, in the end, likely came down to Macon County’s economy. However, that might be even harder to pin down than we think, as Kathy Wade, the Director of Environmental Health and Emergency Preparedness at Macon County Health Department, explained.

“One of the things that I would like for the EEHW members to think of are a few things about what will happen when the ordinance does get changed,” Wade said at the subcommittee meeting. “That means we are no longer following state laws. The next step, we could potentially lose our certification as a certified local health department in the state of Illinois. What does that mean? We could lose grant funding. We may have to pay grants back and we may have grants stripped from us. This is a huge thing for those in Macon County. This isn’t necessarily about the restaurants right now. This is for every community member in the county.”

Some of these programs that could lose funding include Starting Point, Baby TALK, and infant immunization programs with MCHD—crucial programs for the Decatur-area community.

Wade also reiterated these points at the Board Meeting.

Board Member Karl Coleman also delivered a citizens’ remark, which reinforced the importance of these public grants, at the EEHW subcommittee meeting. At the Board Meeting, he also showed that the situation means more.

“We’ve lost over 160 people if I get the number correct since it [coronavirus] started here in Macon County, one of them yesterday,” Coleman said. “And I feel today that my 90-year-old grandmother, who is currently in the hospital with COVID at the moment, may be the next one…because we want to be able to go back to the bar and drink a beer or have a steak—which is clearly a voluntary action that we don’t need to take in the midst of a pandemic when we know that it is unnecessary health risk.”

Brandi Binkley, the Health Administrator for MCHD, argued against the ordinance change for another reason: Macon County may be entering a post-holiday coronavirus surge.

The discussion, many say, will continue into future meetings.

“It’s going to because I’m going to bring it up,” Zimmerman said. “If our numbers start going up, we are going to have that conversation. And I know that sunset’s in three months, but even if the numbers go wrong, before that, we will bring it up.

The county has no other agency that oversees or enforces coronavirus measures.

Check in later for more developments on this story.