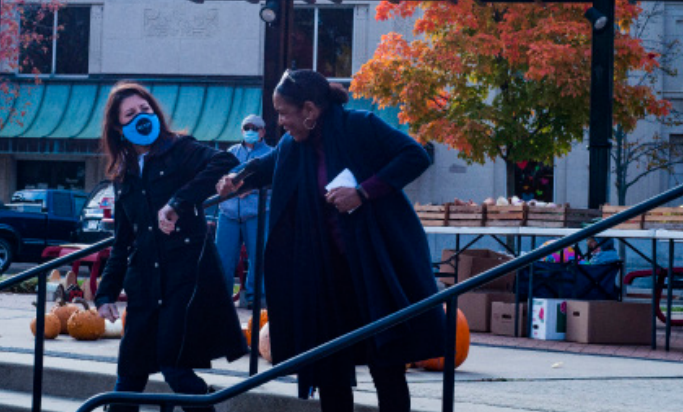 Betsy Dirksen Londrigan greets Lieutenant Governor Juliana Stratton with an elbow-bump in front of a crowd of early voters. Photo by Athena Pajer.

Betsy Dirksen Londrigan greets Lieutenant Governor Juliana Stratton with an elbow-bump in front of a crowd of early voters. Photo by Athena Pajer.

Local Democratic leaders and members of the Millikin community have been teaming-up in the weeks before Election Day to spread a message: Vote early and bring a friend.

This year, “Stroll-to-the-Poll” events have grown in popularity. For two weeks in a row, Millikin students met to vote early together. This is on-par with the nationwide trend: a major uptick in early voting.

According to Kamryn Harris, one of the organizers of the Nov. 1 event, they helped three or four people vote out of the nearly twenty who arrived. Almost everyone else had already voted–which Harris believes is a good sign.

“It really starts with the young voters,” Harris said. “We were missing that in the last election. The young, the minorities, and all of that. So, if we all work together to get those votes in, that really matters. Even if they don’t vote, that’s still votes against what we need.”

Millikin student Serron Pettis is primarily interested in using his vote to solve local issues. He is most interested in the Fair Tax Amendment. He is originally from Chicago, but since he will be in Decatur for some time, he voted in Macon County prior to the event. He attended the event to offer support.

“I know that a lot of people I already know of have voted early,” Pettis said.

This is a trend in local Stroll-to-the-Poll events, including one that took place on Oct. 24 and featured several local and state politicians as speakers.

State Representative Sue Scherer, State Senator Andy Manar, Lieutenant Governor Juliana Stratton, and John Dunn, who was an Illinois representative for 20 years from 1975-1995, were in attendance on Oct. 24.

“Lincoln would have voted Democrat,” Dunn said to a group gathered in Central Park, who responded with laughter and applause.

Several of the politicians used the event as an opportunity to rally against the current U.S. Representative Rodney Davis and support the Democratic opposition, Betsy Dirksen Londrigan.

The race between Davis and Londrigan is on the national watchlist. Flipping the thirteenth district of Illinois from Red to Blue would be significant, as Davis has been the representative of this district since 2013. The seat itself has been Republican since 1895, unless it was vacant.

Londrigan came close during the last election, but ended up losing by less than two votes per district region–less than 1%.

Londrigan, a former teacher who is pro-union, plans to join the Education and Labor committee and the select committee on climate change. However, the issue she is focusing most on right now is healthcare.

“I’m running to get someone who has voted 11 times to repeal the Affordable Care Act with no replacement, which would kick millions of people off insurance,” Londrigan said. “And really, it stands in direct conflict with, you know, what I hear from people in every corner of the district every day. We need to protect our healthcare, and that’s why I got into the race.”

In fact, Davis’s votes to repeal Obamacare is the key issue that other politicians have with him.

“I could tell you stories that could make your skin crawl,” Scherer said at both events on Oct. 24 and Nov. 1. Manar and Londrigan echoed the same sentiment in their brief speeches on Oct. 24.

“Healthcare is very important to me, especially with being a younger person, 26, and having just lost my healthcare,” Dominique Smith, a Millikin alum who helped organize the second event, said, referring to the rule where people over the age of 25 can no longer be on their parents’ health insurance plans.

For many of the students concerned with local and national issues, including healthcare, they have found that connecting with local politicians and leaders has been a way to help spread their voice and find mutual support.

“I’m from Decatur, so I really tried to talk to my own community members,” Harris said. “So, I feel like we’re not involved in the community enough to make the change we want to see on-campus. So, when we reach out and make connections, that’s when the most change happens.”