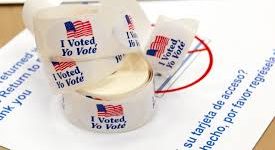 You know the Republican and Democratic presidential candidates. But there are more offices – and more candidates – on your ballot.

Congressional candidates, state and county legislators, and a question about a proposed amendment to the IL constitution will be decided this election. Let’s break down the ballot so you know what you’re voting for when you step into the box on Nov. 3.

If you’re voting in Macon County, this is what will be on your ballot. Here’s a breakdown of some of the positions as well as brief summaries of the candidates. (For more information about what’s on your ballot, you can find a sample ballot at the Macon County website.)

Proposed Amendment to the 1970 Illinois Constitution:

This amendment, known as the “Illinois Fair Tax,” was proposed by Governor J.B. Pritzker (D). Currently, the IL constitution prohibits graduated-rate income taxes, but this amendment would allow for a graduated-rate income tax. IL legislatures would now be able to set the rate of income taxes. IL currently has a 4.95% flat individual income tax; the amendment would result in rates ranging from 4.75% to 7.99%. This would likely increase income taxes, especially for businesses. Wealthy filers with income in the top bracket would have their entire income taxed at 7.99%. On your ballot, you can vote “yes” or “no” to the proposed amendment.

Incumbent Donald J. Trump (R) is running for a second term. He is a businessman and investor. His Vice President is Michael R. Pence (R).

Joseph R. Biden (D) is the former Vice President to Barack Obama. Before that, he was a US Senator for Delaware. His Vice President is Kamala D. Harris (D).

Howie Hawkins is a member and co-founder of the Green Party. His Vice President is Angela Walker.

Gloria La Riva is a member of the Party for Socialism and Liberation. Her Vice President is Leonard Peltier.

Brian Carroll is a member of the American Solidarity Party. His Vice President is Amar Patel.

Jo Jorgensen is a member of the Libertarian Party. Her Vice President is Jeremy “Spike” Cohen.

Mark C. Curran Jr. (R) is from Lake County, IL. He has a background in law enforcement. His issues include expanding choice and competition in health care, securing the US borders, and opposing tax increases.

Incumbent Dick Durbin (D) has been a US Senator since 1997 and the Senate Democratic Whip since 2005. His issues include tax fairness for farmers, affordable federal student loan rates, and the establishment of the Deferred Action for Childhood Arrivals (DACA).

Willie L. Wilson is a member of the Willie Wilson Party. He has a background in business and philanthropy. His issues include police reform, bail-bond relief, and modifications to the Affordable Care Act to provide more coverage.

David F. Black is a member of the Green Party. He has a background in law. His issues include universal healthcare, increasing the federal minimum wage, and abolishing the Electoral College.

Danny Malouf is a member of the Libertarian Party. He has a background in human resources. His issues include bringing home troops, ending the war on drugs, and abolishing the Federal Reserve.

Representative in Congress Thirteenth Congressional District: Members of the US House of Representatives are elected every two years. Macon County is in the 13th district of IL.

Incumbent Rodney Davis (R) has been a US congressman since 2013; he is a Millikin alum. His issues include lowering taxes, reforming the healthcare system, and strengthening crop insurance for farmers.

Betsy Dirksen Londrigan (D) has a background in education. Her issues include expanding the Affordable Care Act, reforming immigration, and reforming law enforcement and funding.

Scott Reuter (R) held this position in 2000-2004. He is an adjunct professor at Millikin and works with the Macon County Public Defender’s Office. His issues include creating alternatives for juveniles other than the criminal justice system.

Tammara “Tammy” Wagoner (D) has served as an assistant state’s attorney in Macon County and with the Piatt County state’s attorney office. Her issues include countering domestic violence and weapons-related offenses.

Circuit Clerk: Sherry A. Doty (R) is running unopposed for the position of circuit clerk.

Recorder: Mary A. (Tangney) Eaton (D) is running unopposed for the position of recorder.

Coroner: Michael E. Day (R) is running unopposed for the position of coroner.

County Auditor: Carol A. Reed (D) is running unopposed for the position of county auditor.

Members of the County Board District One: Incumbent Rachel Joy will not seek reelection. Jody Fronk (R) and Karl Coleman (D) are running for Joy’s vacant seat. You will be able to vote for one person.

Members of the County Board District Two: There are two open seats in district 2. William “Bill” F. Oliver (D) and Helena Buckner (D) are both running for reelection. There is no Republican challenger. You will be able to vote for two people.

Members of the County Board District Three: There are two open seats in district 3. Bryan E. Smith (D) and Mary A. Rood (D), who both currently serve on the board, are being challenged by Ryan Kreke (R). You will be able to vote for two people.

Members of the County Board District Four (full term): Incumbent Patricia A. Dawson (D) is running unopposed for a full term.

Members of the County Board District Five: There are two open seats in district 5. Incumbent Debra Kraft (R) is running for reelection. The other candidates are Jeffrey L. Entler (R) and Jennifer McMillin (D). You will be able to vote for two people.

Members of the County Board District Six: Incumbent David M. Drobisch (R) is being challenged by Rob Hickey (D). You will be able to vote for one person.