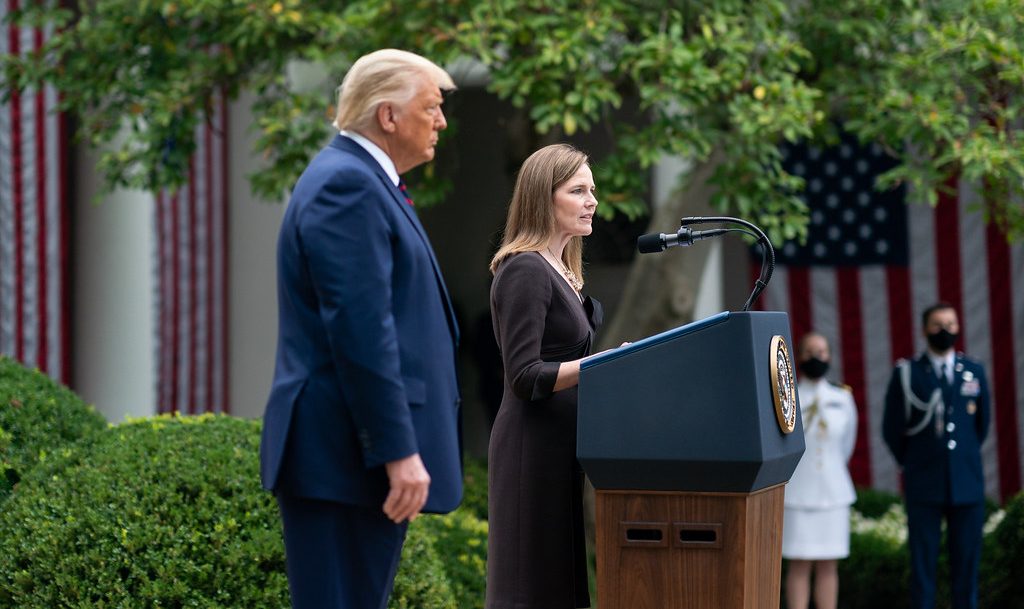 Barrett, a circuit judge for the Seventh Circuit Court of Appeals, was not on the initial shortlist released by the President on September 9, but her name quickly rose to the top of likely replacements in the days following Ginsburg’s death.

“Barrett attended law school at Notre Dame, a prestigious institution,” said Millikin professor Amber Lusvardi, “and has been serving as a judge on the U.S. Court of Appeals, so by any traditional standard set by other Justices on the Supreme Court, she is qualified.”

Barrett also clerked for late Justice Antonin Scalia from 1998 to 1999, and later went on to teach law at her alma mater, Notre Dame Law School.

Democratic officials are concerned that Barrett’s conservatism would hold significant sway over her decisions on the Court. She has spoken more than twenty times at events hosted by the conservative Federalist Society, and she previously provided “briefing and research” to Baker Botts, the law firm that represented George W. Bush in the Supreme Court case that ultimately resulted in him becoming President.

“We can never truly know how a judge will act once they ascend to the Supreme Court,” Lusvardi said. “She did, in a 2017 Notre Dame Law Review article, criticize Justice John Roberts for his decision to be the swing vote to uphold the Affordable Care Act when that decision went before the court, so healthcare may be on the table again.”

During her time as a circuit judge, Barrett has authored both majority opinions and dissents. In Doe v. Purdue University, she wrote the unanimous decision in favor of a male student who had been denied due process in a sexual assault case, in which he was the alleged perpetrator. She also wrote a dissent in the case Kanter v. Barr, in which the majority ruled that nonviolent felons were prohibited from owning guns; she wrote that there was no evidence that denying guns to nonviolent felons actually helped prevent gun violence in a meaningful way, and that doing so was a violation of the Second Amendment.

There are concerns from some about Barrett’s connection to the Christian organization People of Praise, which, according to former members, teaches that the will of the husband must be obeyed by the wife. However, Barrett has insisted that she will enforce the law as written, stating, “I would never impose my own personal convictions upon the law.”

“She did indicate during her confirmation to the U.S. Court of Appeals that she considered Roe v. Wade settled law,” Lusvardi said.

In addition to concerns over Barrett’s conservative beliefs, many Democratic officials, as well as some voters, are upset over the double standard being practiced by Republicans in the Senate. In 2016, when President Obama nominated Merrick Garland to fill the vacancy created by the death of Antonin Scalia, Senate Majority Leader Mitch McConnell refused to hold a single confirmation hearing. The justification at the time was that the nomination came too close to the looming election, and that only after the election was over could the nomination proceed.

Now, however, with Election Day less than a month away, Republicans in the Senate appear to have no qualms about quickly confirming Barrett to the Supreme Court. Whether or not the expedient confirmation will affect the election outcome remains to be seen.

“Like many political issues, I suspect the issue plays well with Trump’s base of voters in the electorate and not with Biden’s base of voters,” Lusvardi said. “It may be a more contentious issue in some key Senate races, like for Sen. Susan Collins in a tough race in Maine.”

Should Barrett be confirmed before the election, it would mark the first time a President successfully appointed more than two Supreme Court justices since President Reagan’s appointments of Chief Justice William Rehnquist and Associate Justices Sandra Day O’Connor, Antonin Scalia, and Anthony Kennedy.