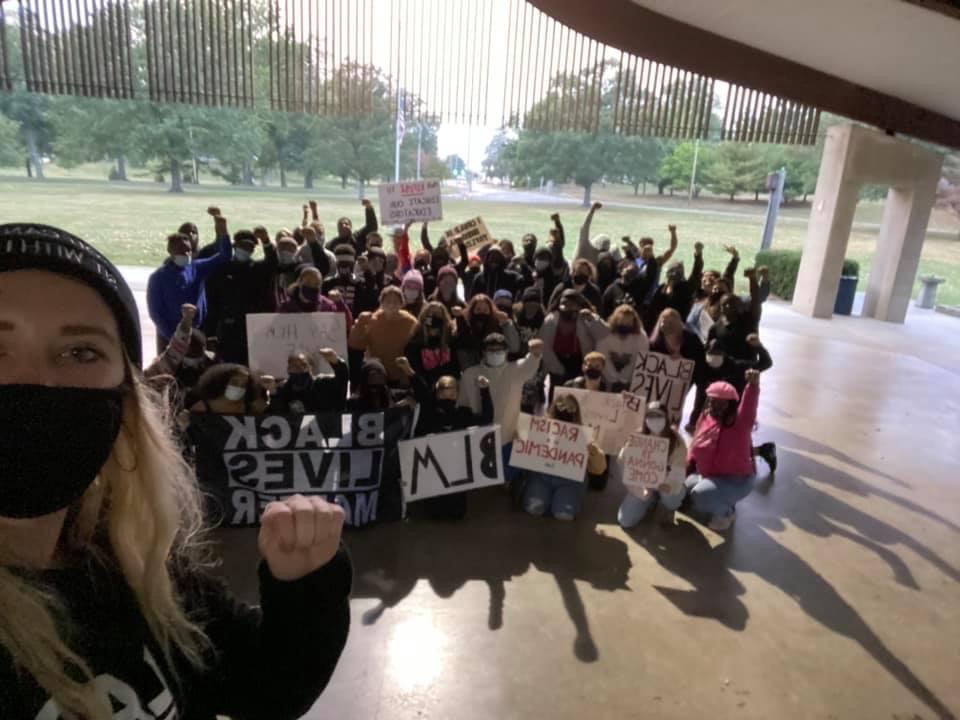 “Who Do You Protect?”

After an altercation involving a vehicle and students at a protest passing in front of Shilling Hall, students voice long-held qualms against Public Safety.

The events that occurred during Saturday’s protest for Breonna Taylor endangered students. However, a man attempting to drive through the crowd of protesters was only half the story. Many students were confused by Public Safety’s response to the altercation. They want to know: What is Public Safety’s role and jurisdiction?

On Saturday, Millikin students and Decatur community members gathered to protest for Breonna Taylor and the Black Lives Matter movement. As they walked down Main Street in front of TKE fraternity house and Shilling Hall, a car attempted to drive through the crowd.

A blockade of protesters formed to prevent the driver from continuing to drive through the protest. Public Safety Officer Patrick Burke showed up to the scene, but did not step in. Instead, he stayed in his car.

“Public Safety is about thirty, forty feet away, seeing all this unfold, and refused to do anything about it,” Dominique Smith, a Millikin alumna, said a day after the protest. “That right there kind of struck a nerve with me, for sure.”

Smith had approached Burke to explain what happened after she realized that another protestor and Burke were starting to get into a quickly-escalating discussion. When Smith reached Burke, he did not cooperate, refusing to give her his name or badge number, according to Smith. Burke did speak with a white man who approached him after Smith.

Burke claimed to call the Decatur Police Department, but they never showed up.

The short 10-minute derailment in the protest resulted in the protesters deciding to leave, move on, and finish their march with no interjection from Millikin Public Safety, nor DPD.

After protesters marched back to Fairview Park and listened to a few speakers, many protesters attended an impromptu protest at Public Safety.

Officer Burke came out to talk to the group gathering outside of Public Safety. He claimed he did not know the protesters were Millikin students, then diverted the conversation to what has happened in Portland and other major cities where protests have turned into destruction. After this brief conversation, more protesters showed up, and Burke went inside Walker Hall, where the Public Safety office is located.

Burke refused to come back outside and meet with protesters. During this time, protesters attempted to call Public Safety. They were either put on hold, hung up on, or dispatchers would not answer the phone.

Eventually, the Director of Public Safety, Officer Chris Ballard, arrived. He was not initially wearing a face mask, and it was not until a protester gave him a disposable mask to use that his face was finally covered, following CDC guidelines and Millikin’s campus rules.

“Officer Burke has already updated me on that, and his version of events is different,” Ballard said to protesters. “Burke stayed back observing because he was concerned that the group was in the street. His perspective was he did not see that as something that required immediate intervention, he was going to watch it and see what happens. He did call Decatur [Police] and was told that they were going to respond.”

In response, one student raised the concern, “It would have taken two seconds for someone to get hurt and get killed and he [Burke] stood there and watched.”

“If he would have just run us over, then what?” another student said.

“The vehicle had already stopped,” Ballard said, which was then met with disagreement from the group.

“At the end of the day, it’s not about if we got hit or whatever, it’s that Millikin Public Safety did not protect the Millikin students, and that’s the problem,” one student said.

“There weren’t issues because we stopped it,” another said. “They would have hit those two ladies.”

“To do what?” the same student asked.

“You said you stopped it [the truck],” said Ballard.

The student responded, “No, everyone stood in front of it. We stopped it as a group, we stood in front of the car. All he had to do was step out, say something, he didn’t even have to walk up there if he didn’t want to. Step out, say something, that’s all it was. It didn’t need for us to stand back there because after we did, he [the driver] was still trying to move up.”

Other students chimed in.

“The students feel unsafe because of you,” a student said. “You are not doing your job and you are failing at your job.”

One student asked, “Will this get handled? If we send an email, will you respond?”

“And what is that doing?” a student asked. “Why isn’t he [Burke] out here with you? Because he was there?”

“Because I don’t think that’s his role with this,” Ballard stated, while many students yelled back, “It is!”

Throughout the protest/discussion at Public Safety, which lasted for less than an hour, Ballard recommended almost every complaint to be filed with Decatur PD.

“You [Ballard] said when something happens on public property, you don’t have to react,” one student stated.

“That’s not our jurisdiction. He [Burke] didn’t want to make things worse by interjecting,” Ballard replied.

One student said, “The thing is, you speak on processes and we have to go through the process, and over time this will get fixed. Two years ago, there was an incident that led to a protest, and here we are two years later and it’s still happening.”

The crowd agreed with the statement.

Ballard said, “Whoa, time out, I’m throwing that one right back. That went through a very good process.”

“No, I’m not disagreeing with the process,” the student said.

“From my perspective, that was fantastic because everyone had a chance to talk,” Ballard said.

Students responded with, “You missed the point,” and, “It shouldn’t have happened.”

A student said, “I understand what you just said. We get the process. The process isn’t the problem, it’s that it keeps happening…that it’s a recurrence, that’s the problem.”

A student interjected, stating, “The circumstances on how they happened were different. The reason behind it, the purpose of it was the same, what we did was the same for the purpose of Black Lives Matter, etc. We marched then and now, the only difference is why we did. It’s the same thing, but it’s specific situations. Same reasons, a specific situation. They are two peas in a pod.”

When asked if he thinks this incident was his responsibility, Ballard said yes.

One student asked, “Is it Burke’s responsibility?”

Another student stated, “Now you have students that don’t feel safe on campus with an officer and he’s going to continue working here…”

Ballard interrupted and responded with yes.

“But he’s not speaking on his own behalf,” a student said.

“Because this is not the environment that I’m going to bring [him] in and have everyone start doing this and that. What good will that serve?” Ballard asked.

“So, what does this serve? Why would you come out? What good is this serving? If he’s not going to serve good, then what are you doing?” a student asked, while another one chimed in, “Why would I want an officer who isn’t going to serve?”

“I’m listening now,” Ballard said. “That’s phase one. We will have further discussions…”

“When? When? What time? What day?” students asked.

“And then as the process goes, we will do what we did,” Ballard added.

One student asked, “Why do we have to beg you to help us?”

There are more stories on this topic developing.

Read more about the protest here: “Protest Reveals Tension Between Students and Community”