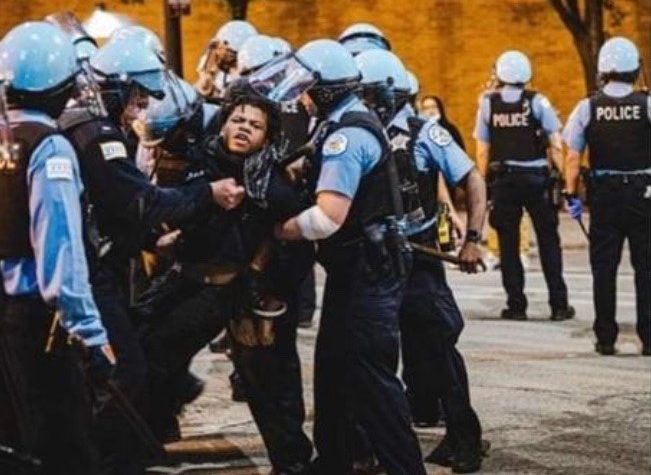 Protests advocating for Black Lives Matter and police reform have gripped the country, but perhaps the brutal arrest and temporary disappearance of former Millikin student Justin Cosby shocked Millikin the most.

Cosby was arrested on May 31 at a protest in Chicago. He was peacefully protesting when police maced a crowd of people, causing protestors to dart in different directions. Police chased Cosby down a street, where they trapped him.

“I was on the ground yelling that I wasn’t resisting while at least one of the officers was holding me down and another one hit me on the back and legs with a baton,” Cosby said. “Due to a combination of the beating and struggling for air, I couldn’t stand by the time they told me to get up which resulted in them carrying me.”

The officers used zip ties to restrain Cosby. Initially, they were just on his wrists. However, the tie was too loose and started to fall off. After another brutal beating, the cops restrained him again, this time with two zip ties around the wrists and one around his ankles.They tried to force him to walk with the zip tie around his ankles.

“How am I supposed to walk if my legs are tied up?” Cosby asked. One officer said he did not care, while another realized Cosby had a point. The officer cut his legs free, but the zip ties still burned into his wrists.

Cosby was held in custody while experiencing excruciating pain. He had lost consciousness at least once throughout the process and could barely move his hands. He begged for medical attention but was not given any.

Several hours passed while his loved ones tried to ascertain where he was being detained. People across the U.S. jumped into action, sharing Cosby’s story on social media and working to locate him. At one point, Cosby was trending on Twitter.

“How am I supposed to walk if my legs are tied up?””

“I had no idea being arrested would be as big a statement as it did,” Cosby said. “I didn’t know so many people were posting me until I got out Monday morning and even then it took another few days to understand the scope of how many people were moved by it.”

Cosby is home and safe, but his experience hits close to home for the Millikin community. Several students helped search for Cosby on the night of his arrest.

Seron Pettis, a sports management major at Millikin who holds several leadership positions on campus, knows Cosby from his time at Millikin. Pettis stayed up for hours calling different numbers in the Chicago Police Department, trying to locate Cosby. People yelled at him, hung up on him, or told him that Cosby’s name was not in the system.

“I had no idea being arrested would be as big a statement as it did,” Justin Cosby said. “I didn’t know so many people were posting me until I got out Monday morning and even then it took another few days to understand the scope of how many people were moved by it.”  ”

Pettis continued searching until 3 A.M. when he saw an Instagram Live video of Cosby reassuring everyone that he had been released. According to Pettis, Cosby was not allowed to make a phone call until several hours after his arrest, he was not given water, and he was not allowed to talk to a lawyer. His experience has had a powerful effect on Pettis.

“I definitely couldn’t imagine exactly what he went through,” Pettis said. “We weren’t close-close…but we were close enough to where, if something happened, he would do the same for me. I made it my duty to make sure he was found. I made sure he got home, whatever I could do, my part, spreading the word and trying to call.”

Theater major Jauhara S. Muhammed Bey, who was on the frontlines of the Chicago protests when Cosby was arrested, echoes that statement. Even though she doesn’t know Cosby, his story compelled her, and she worked hard to spread information and alert Millikin to Cosby’s situation.

“I don’t know the boy at all. Didn’t even know that he existed,” Bey said. “I don’t know him personally but knowing that a Black man had this issue, I was just like, I cannot let this Black man go, cannot let another Black man go feeling like he went through a university that didn’t care about him. My best friend went to Millikin with me but he dropped out – he was also Black – because he felt like they didn’t care. I cannot have that again.”

Millikin recently released a statement in solidarity with the Black Lives Matter movement. Students like Bey are calling on Millikin to increase support for Black students.

While protests and activism are happening across the country, Cosby’s arrest brought the movement to Millikin’s front doors. Cosby’s story caught national attention, but it also rallied many people in the Millikin community to advocate for protestors and the Black Lives Matter movement.

One week later, students feel that his experience highlights some of the issues that these protests want to address. Cosby’s arrest and the violent police reaction to protestors across the U.S. are proof to many students that the movement must continue. Cosby himself has been out protesting still, even after his traumatic detainment.

“Protesting is important because after this past week of protests there actually has been a legislative response and the normalization of police violence in American culture is being closely examined once again,” Cosby said. “I intend to attend as many [protests] as I need to until the world around us changes into one where a public official who betrays the trust of their citizens by breaking the law will face justice.”

He is currently studying at Richard Daley College in Chicago where he plans on obtaining his associate’s degree before transferring to a four-year college.