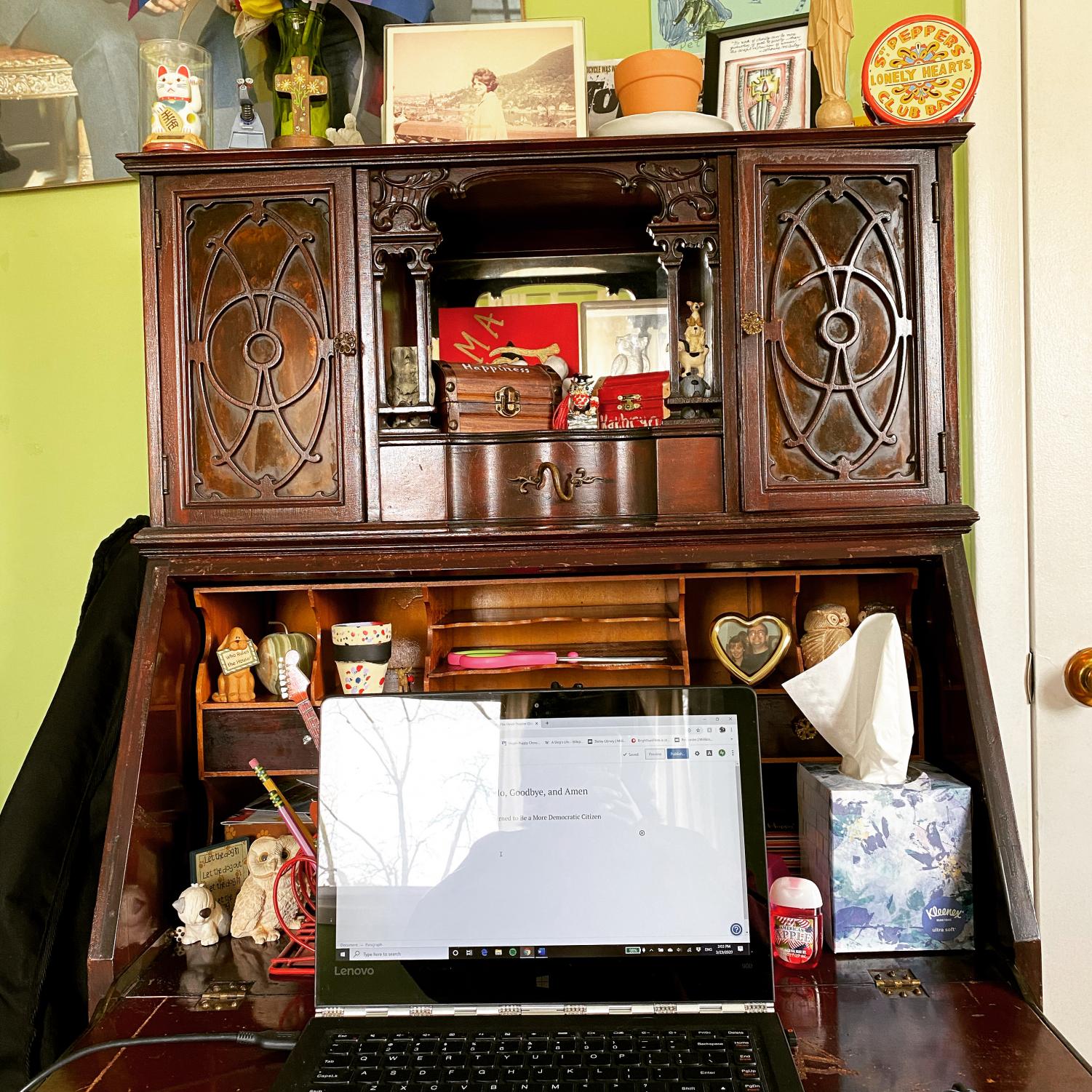 Living in a Land of Confusion

This is the world we live in. Too many people making so many problems. Superman, where are you now?

Phil Collins and Genesis might not have had a global pandemic in mind when writing those lyrics, but these words are as relevant as ever. We live in confusing times, with no end of Covid-19 in (immediate) sight.

Governor Pritzker issued a stay-at-home order, leaving me at home in Oak Lawn with my family so I’m taking classes on Zoom and we’re trying to not go insane or kill each other—whichever comes first.

“So, is Tiger King really worth watching?” my mother asks me for the second time in under two hours, or maybe longer than that. It’s harder to keep track, these days.

Quarantine warps time. It almost destroys the concept entirely. We all restructure ourselves to a life of little social interaction for the greater good. My parents have been lucky their jobs were flexible enough to let them work from home. But being an accountant for an order of Catholic nuns isn’t exactly the easiest to adapt for remote working.

Mom rarely works from home. In this case, she and her co-workers were forced to make that exception, making quick adjustments on the fly. Her makeshift office took up the East side of the basement for the first couple of weeks, but now she works in our family gym.

There are some things she misses about interaction. She misses saying hello to someone across the hall during her break.

“Talking on the phone gives me only their voice to read. It’s way more different than the office,” Mom said. “You can read their body language or can tell if they’re distracted there. It’s hard to interpret that over email or even over the phone.”

She makes store runs when food is low in the house. She noticed stores have taken preventative measures in stopping the virus’s spread.

Home Depot, for example, has tape on the floor separating customers from each other. Our local Marianos has signs warning patrons “only one per customer, please.” Commodities like toilet paper and cold medicine are still hard to find because people hoard them.

Dad already has his home office next to his and Mom’s bedroom. As a data analyst, he doesn’t have to work at the office all the time. He’s been working remotely ever since Michael and I were little. Even now it’s been challenging for both of them. Dad started a new job and now has to know his new co-workers better via FaceTime or Zoom.

For both of them, drawing a line between work and everything else proves very difficult. Mom loses her natural work breaks when working from home. Dad understands this struggle all too well.

“When working on something, it’s easier to lose track of time,” Dad says. “You tend to work so hard you’ll forget that it’s lunch or dinner time. Whereas in the office, you notice people getting up to get food more often.”

Some days, lunch is catch-as-you-can. Mom’s kind enough to cook us hot dogs, quesadillas, or even tuna noodle casserole every so often.

My brother Michael occupies the West side of the basement with his tech table all set. Sometimes, he uses the kitchen table for studies. He and Mom left each other to their own devices.

DePaul has moved all of Michael’s classes online. He moved back home the day after I got back from London.

Surprisingly, Michael’s hardest choice would be what to do in his free time. He gets to choose between doing laundry, reading a book, catching up on a show, or writing something creative.

Michael and I love Thursday nights. He hangs out with his fellow Doctor Who Club members. I chit-chat with my Sigma Alpha Iota sisters via Zoom.

For Michael, socializing hasn’t always been easy. He has options to reach out (Zoom, FaceTime, email, etc.)

“These past couple of weeks I’ve been stuck in my own head, and that combined with there isn’t really much outside and the fact that you’re stuck inside all the time, there isn’t really a lot that I can do to deal with that,” Michael said.

Michael misses being close to the action. Living so close to DePaul’s campus, movie theatres were an Uber drive, train ride, or just a short walk away.

He studies at DePaul’s College of Computing and Digital Media. Professors usually record classes, so people can go back to see what they missed.

“CDM is kinda lucky because they have sort of the resources, so even if there’s no class we can work around something,” Michael said. “So, for me, at least it’s not an issue. I know a lot of music department is really upset because that causes a lot of problems.”

I meanwhile rule my tiny kingdom right above the garage. I use my Nana’s old writing desk, a family heirloom, as my makeshift office. I enjoy working in style, but even so, I miss the PMC benches dearly.

Binge-watching Adventures from Moominvalley can only distract me from the pain so long. I never got to say goodbye to those benches as well as the people sitting on them.

While Zoom has its perks, I still want some physical sense of closure. All those seniors’ last chances gone down the crapper. The most I can do is find joy whenever I can, and when life was normal, going on walks made me calm and perky.

Now going on walks around the block feel like committing crimes against humanity. I don’t want to get people sick. The playgrounds’ swing sets are unusable and playing on them isn’t a wise idea right now anyway. People walk on the street to avoid getting too close to others just trying to walk their dogs.

“The main thing has just been when you go out, how cognizant you are of the people around you and trying to keep a distance, and this does create a low-level anxiety all the time,” Mom said.

Weekly movie nights became our silver lining. For the past couple of weeks, before the high-risk took hold, we’ve invited Uncle B(rian) over.

Uncle B spends most of his time in his apartment by himself. We invite him over for a movie night every week to give him an alternative to spending all of his time alone.

We only invite him. Even we don’t want to take too many chances here. Everyone else can Zoom or FaceTime in to join the fun if so inclined.

We list our favorite parts and laugh as we quote our favorite lines. I’m no movie person, but I love spending time with family, especially with those I never get to see very often.

In fact, seeing what kind of new-found habits people will stick to ought to be interesting.

Dad hopes tech companies such as his would be more willing to let people work from home. He feels it would save them money by not moving new hires from different states to their home base.

“Maybe since these companies have been shaken out of their status quo, they’ll look at things like remote working and things like that and think, “Hey, it’s not the end of the world if it’s something we want to do,” Dad said.

As for Mom, she hopes that perhaps smaller companies like hers would take more time in making emergency planning. Things like signing out equipment and assigning people to deliver important information to clients took more consideration and planning than they originally thought.

This quarantine could bring some much-needed changes that will hopefully stick. But not all changes are for fixing problems

We wouldn’t give Zoom a second thought if not for the quarantine. Despite all its problems, Zoom and other platforms like it provides ways to connect with people, even from far away.

Would we do things like that in the future? Right now, it’s a little hard to tell. As mentioned before, we live in confusing times.

“All of us are in a new world now, and we’re going to adjust the best we can,” Dad said.