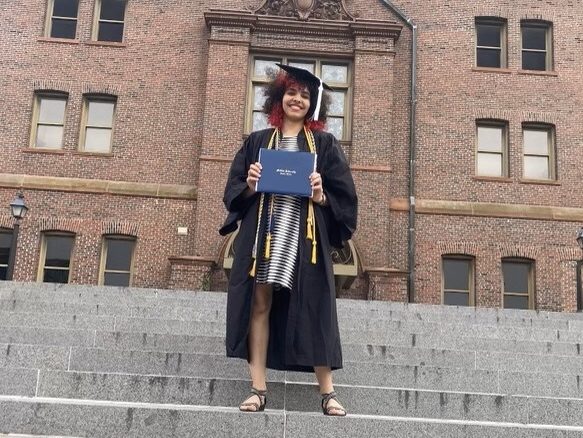 With graduation approaching, senior Charlize Pate is ready to share her talents outside the bounds of Millikin’s campus.

Pate’s name is likely familiar to avid readers of the horoscopes—she has been a Decaturian reporter for the past four years, writing the popular “Millikin in the Stars” articles and pop culture features. Pate’s other extracurricular involvement includes Millikin’s chapter of the national service fraternity Alpha Phi Omega and the Songwriter’s Band, with which she made her debut performance this past Thursday.

Though Pate just graduated with a degree in English, her work at Millikin has reached much further than one department. Pate has two declared concentrations within the English program, professional writing and creative writing, and has also completed minors in publishing and editing and in music.

Pate began writing her first album this year as a part of her honors capstone project. It was originally intended to be short, but has already grown to eight songs. She describes the genre of her work as “sort of a combination of humor and horror,” comparable to the popular podcast Welcome to Night Vale. Under the working title Feed the Madness, Pate plans to release her album some time after graduation.

College wasn’t always a part of Pate’s plan, however. “I at no point particularly wanted a degree or wanted to go to college at all,” she says. Homeschooled all through high school, though, the community intrigued her. “Everyone was kind of the same in high school, and none of them were like me either.”

Pate was accepted into the Long-Vanderburg Scholars Program at Millikin, an opportunity that offered her the enriching experience she was looking for. “I wanted to come to a place where there were people who had things in common with me and also there were people from different perspectives, and the Long-Vanderburg scholarship program is all about diversity and leadership and seeing different people’s points of view.” She was able to both learn from and contribute to the sharing of mindsets. “It exposed me to many different backgrounds, and I think that helped me grow as a person a lot.”

What is she most excited to do after graduation? “Anything I want,” Pate says. Most of her passion projects are career-oriented, but Pate is looking forward to much more than just working. “I would like to get back into archery, because that was something I did at some point,” she says, also planning to take the time for exercise, reading for fun, and maybe even fixing her sleep schedule.

Mainly, though, Pate’s post-graduate plans include finishing creative projects begun at Millikin. Like with her album, Pate is interested in revisiting a verse drama manuscript from her Advanced Creative Writing course, and has the long-term goal of combining what she has learned in college into a full-length musical.

It is this interdisciplinary experience that has made Pate’s time at Millikin most valuable.  “When I took Major English Authors I and Survey of Western Music, we were going across the same time periods at the same time, and so I got a bigger picture of what was going on.”

The Decaturian wishes Charlize the best in her post-graduation pursuits. Her horoscopes will be missed, and we will be anxiously awaiting an invitation to the album release.