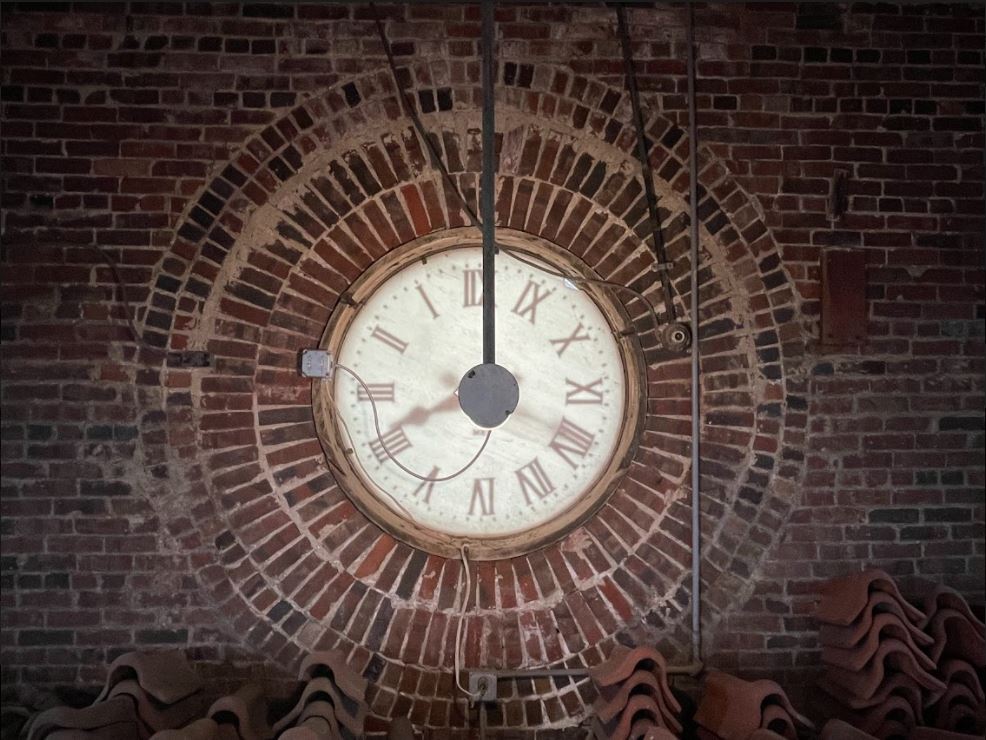 The Ghosts at Millikin

Do you believe in ghosts? Whether or not you do, Millikin undeniably has spooky attributes. From the Greenwood Cemetery next door, to the creepy clock and eerie underground tunnels—this school can send chills down your spine. Whether you’re a skeptic or paranormal activist, hearing the stories of Millikin’s haunts may make you become a believer—or cause you to question the unknown.

We now know what’s in the Shilling clock tower. And we’re not the only ones, though now there are considerably fewer students attending this school who do. In previous years, graduating classes were taken up to the tower and they would write their names and the year of their class. There is actually graffiti with dates as recent as 2016.

Some notes include quotes as well, much like a senior yearbook. We found a broken quote by Pablo Picasso that was left by Eric Du, class of 2013. “Only put off [until] tomorrow what you are willing to die having left undone.” And some of the writing was just creepy unsigned messages that come off as a warning, like “IF YOU can Read This You’re Too High.”

And this may be fair, as the structural integrity of that place is not sound, which is why they’ve locked up the tower in the first place. The floorboards are cracked, with nails sticking out. The walls are dilapidated and in places, it seems the ceiling has caved in.

But if you keep climbing the stairs up onto the roof, you can see the entire campus and beyond, making it worth the creepy climb; it’s also the ideal place to be on the Fourth of July, according to Tom Friend, the Security Manager, who took us to the haunted hotspots around campus.

While the clock tower itself is not necessarily haunted, it is common knowledge that Millikin definitely is. And, by extension, dealing with ghosts is one of Public Safety’s lesser-known jobs, so Friend had a lot to tell us about this campus.

Speaking of Shilling, have you ever noticed a bricked up window in the building? Near the entrance to Einstein Bros., there are two clusters of three sets of windows. On the farthest right side, the window is filled in with bricks. According to Friend, there was a fire in Shilling decades ago. In the room behind the bricked-up window, a teacher died in the flames. Then, after the occurrence of the fire, it is said that an apparition of the teacher that died in the fire would be seen in the window of the room, screaming. So, they decided to brick it up.

There are many more old buildings on campus, including the Old Gym. To this day, the building houses many old costumes, set pieces, and props, including a coffin and scary carousel horses hanging from the walls. Before the Center for Theatre & Dance was built, SOTAD students rehearsed in the dance studio on the upper floor of Old Gym and others used the space for study purposes. Alumni and faculty that have occupied the building tell stories of hearing footsteps, basketball dribbles, voices, and unexplained occurrences. And trust us, in order to run on the track up there, you’d need to be a ghost, because it is cluttered with chairs and random objects.

If you think Old Gym sounds scary, wait until you hear the tales surrounding Albert Taylor, Aston Hall, and Blackburn Hall. Albert Taylor Theatre has a rumored “Rail Girl” ghost who must be gifted with candy before a show is performed, or else everything in the show goes wrong. The ghost is said to be of a girl who tragically died in the theatre after an accident. In Aston Hall, it is rumored that a student fell to her death in the stairs and now haunts the residence hall. Blackburn Hall’s resident ghost is Bonnie Blackburn, the building’s namesake, who taught Modern Languages from 1909 to 1956. Several residents this year alone have seen a woman in a long blue dress staring mournfully into the mirror in the communal bathrooms, disappearing as soon as they take a closer look.

Did you know that there are tunnels beneath campus? That’s right, tunnels lie beneath us, maybe at this very moment where you are reading this! Underneath campus, tunnels heat the school with steam. You can walk the tunnels, entering through one building and exiting through another across campus. Warm, damp, and creepy, these tunnels enter into almost every building at Millikin, and not necessarily where you’d expect. In fact, we can guarantee you’ve seen and walked past an entrance without ever suspecting what really lies beyond.

Not only is the school speculated to be haunted, so is the land it’s built upon. Reportedly, on the main square where Subway, Domino’s, and our other favorite restaurants are located, there is a tragic and gruesome past to the land. It is said that the space used to be home to one of the original Decatur graveyards. When the area was set to become the buildings we see now, the contractor removed the headstones and built right on top of the bodies.

It’s up to you to decide whether the testimonies of a haunted Millikin are real or a result of a decades-long game of telephone. However, there is certainly no doubt that Millikin is an old school that has seen a lot of lives…and deaths. As you are reading this, assuming you are on Millikin’s campus, beware. The stories may be true.