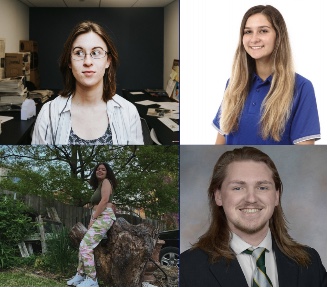 A Dedication to the Dec Seniors

Over the past few weeks, I have had the honor of sitting down with the seniors of the Decaturian. These people have been my mentors and some of my first friends at Millikin.

As they prepare for graduation, seniors Athena Pajer, Jordan Diver, Caleb Kelch, and Alexia McDermott reflect on some of their favorite memories and proudest moments while working for the Decaturian.

From the Illinois College Press Association (ICPA) awards to ordering pizza at weekly Sunday night meetings, the Decaturian has deeply impacted all of these students.

In their four years here at Millikin, they have not only grown as students, but they have shaped journalism at Millikin. These seniors are the Decaturian. Before we say farewell to our beloved senior writers and editors, I want to make sure that every person who picks up this paper knows their name and their impact on this campus.

Athena, Jordan, Caleb and Alexia: This one’s for you.

Athena Pajer. Editor-in-Chief and Writer.
“I feel like I joined the Dec before I came to college,” Pajer said.

After meeting the Decaturian advisor, Dr. Scott Lambert on Admitted Students Day, Pajer knew she wanted to join the Dec. According to Athena, once she started at Millikin, college and writing for the Decaturian became inseparable.

Pajer explains that writing and editing for the Dec has been “a lot of joy and a lot of pain and a lot of in-between. It’s been the most important experience of college.”

Pajer has been the Editor-in-Chief since the end of her sophomore year in 2019, minus her first semester junior year as she studied abroad in London. In that time, Pajer has written for all sections of the Dec and covered a wide variety of topics and events.

“I covered two big protests in Decatur—one was for gun control and one was in honor of George Floyd—this summer,” Pajer said. “I think that those were powerful experiences, and I loved covering those because that’s history.”

For Pajer, some of her proudest moments came from the little things, like meetings and layout.

“My favorite moments have been laughing at random things at meetings and coming up with really good story ideas and watching them come to fruition,” Pajer said. “So, there’s a lot of moments that are proud, but it’s also being proud of a process that was really special.”

Pajer mentioned that her proudest moment over the past four years has been the 2020 ICPA awards, when the Decaturian won 14 different awards.

Lastly, I asked Athena to give some advice to current and future Dec members.

“Look at the world in front of you and say, ‘Bring it on,’” Pajer said. “Don’t be intimidated, because the most intimidating thing in the world is a great journalist.”

Jordan Diver. Sports Editor and Writer.
Diver is a Decaturian legacy. Her brother, Chris Diver, wrote for the Dec while he attended Millikin and encouraged Diver too as well.

“I joined [The Decaturian] right away as a freshman,” Diver said.

Since joining the Dec her freshman year, Diver has covered stories ranging from sports to political protests, and she ended up being the sports editor at the beginning of her sophomore year in 2018. She has held the position since.

No matter what she writes, Diver puts her soul and strong voice into it.

“It’s made me aware of what I can do to try to, not enforce change, but promote change,” Diver said.

For example, some of her favorite stories, “Who Do You Protect?” and “Protest Reveals Tension Between Students and Community,” followed important campus-wide issues and advocated for change in Millikin’s Public Safety.

“I feel proud that we’ve been able to cover what’s gone on at Millikin, and not everyone can say that,” Diver said.

Although Diver came into Millikin anxious to interview others, she has found beauty in learning about new people.

Taking what she has learned, Diver wanted to give this advice to current writers:

“Keep going,” Diver said. “I know it’s hard, but our job is so important and so many things would be swept under the rug if it wasn’t for student journalists. Even at Millikin, you know, we don’t always have the tough groundbreaking stories, but there are things that need to be written about. It’s our job to do that.”

Caleb Kelch. Past Arts Editor and Writer.
Kelch joined the Decaturian second semester his freshman year, after having Dr. Lambert as his writing studio professor and Dr. Paul Toure as his seminar professor. Before he knew he was Dec-worthy, Dr. Toure saw a talent for writing in Kelch.

“He [Dr. Toure] said, ‘Do you have any interest in writing at all?’ I said, ‘I like to do it on the side and everything and I enjoy doing it. You know, I have a blog and stuff like that.’ But he said, ‘You should really consider a major change.’ And I’ll never forget that,” Kelch said.

Through the influence of Dr. Toure and Dr. Lambert, Kelch started writing more and more. He worked his way from being the driver to ICPA his freshman year, to being the features editor his sophomore year, to being the arts editor, a position he held up until this semester.

As the editor of the arts section, Kelch was a visionary.

“I went from writing weekly playlists and writing album reviews to realizing that there’s so many great things we can talk about, “ Kelch said. “We can write music columns, we can do album reviews, but put a spin on it. We can have reviews around campus, we can have different features.”

Outside of his own section, some of Kelch’s favorite stories he’s written have been “Legalized: What Legalized Recreational Cannabis Means for the Decatur Area and for Millikin’s Campus” and “So What, Muppets Can Be Gay!”

Like Pajer, Kelch has loved the experience of winning ICPA awards.

“It’s knowing that someone on your staff has worked their butt off,” Kelch said. “I think that’s really important to know that you put all this hard work in and you get something back.”

ICPA awards aren’t the only thing Kelch has gotten back. Through the Dec, Kelch has learned life experiences as well.

“Writing for the Dec has influenced me as a human being,” Kelch said. “It’s also made me a better writer and it’s also just shown me what I can do, what I’m willing to do, and what I want to do.”

As for advice for Dec staff, here is what Kelch had to say:

“Putting your opinion out there and also once you find your voice—and writing’s a great way to find your voice—never lose it,” Kelch said. “Never let it go. Always keep it a part of you. And that’s something I’ve really done. The Dec really helped me discover my voice. And I’ve just been able to keep that voice a part of me and make it mine.”

Alexia McDermott. Writer.
McDermott, who was actually Diver’s roommate during their freshman year, joined the Decaturian right off the bat in 2017.

“Freshman year, first semester,” McDermott said. “It [The Decaturian] was the first thing I joined.”

While McDermott is a sociology and criminal justice double major, writing has alway been a passion of hers.

“I always liked to write. If I wasn’t doing what I was doing now, I would be an English major,” McDermott said.

Over the past four years, McDermott has written for many of the different sections including a weekly LGBTQ+ news column, some Black Lives Matter columns and news stories, and most recently, a series of athlete spotlights. One topic that McDermott covered changed her college experience greatly.

“I covered MGC [Multicultural Greek Council], the awareness,” McDermott said. “That’s actually what led me to join my sorority, which is a funny story. So if it wasn’t for the newspaper, I probably wouldn’t have been in AKA [Alpha Kappa Alpha].”

Not only has writing for the Dec led McDermott to her home on campus, AKA, but it has taught her the importance of working in different communities.

Something that McDermott has learned that she encourages all Dec writers to do is:

“Savor the moment and take all the criticism and take it into every aspect,” McDermott said.