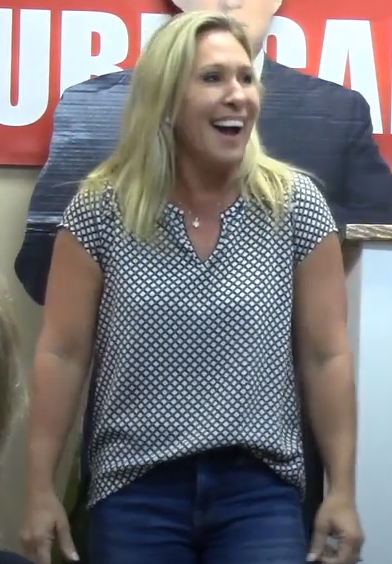 He initially cited “personal and family reasons” as the cause, but eventually revealed that he had been served divorce papers and decided to move in with family in Indiana, rendering him ineligible for candidacy in Georgia.

Georgia law states that if a major party candidate suspends their campaign less than 60 days before an election, there can be no replacement.

“Mr. Van Ausdal can withdraw his candidacy or remain on the ballot,” said Jordan Fuchs, Georgia’s Deputy Secretary of State. “He cannot be replaced.”

As a result, Van Ausdal’s Republican opponent, Marjorie Taylor Greene, was the only active candidate on the ballot. Greene moved to the Georgia’s 14th District only weeks after Rep. Graves announced his retirement. She has a long history of supporting debunked far-right conspiracy theories, such as school shootings having been staged, Pizzagate, and QAnon. She also has posted memes inciting violence against progressive Democrats, including Alexandria Ocasio-Cortez, Ilhan Omar, and Rashida Tlaib.

Greene won the election with 74.7% of the vote, continuing the district’s history of electing Republicans with >70% of the vote.

During the storming of the capitol on Jan. 6, 2020, Greene refused to wear a mask while sheltering in place, and she claimed Democrats were at fault for inciting the violence.

So far, her work as a representative has proven no less controversial. She filed articles of impeachment against President Joe Biden on Jan. 21, the day after the inauguration, alleging abuse of power. Six days later, Rep. Jimmy Gomez (D-California) drafted a resolution to expel Greene from the House. On Feb. 4, she was removed from her assignments to the Committee on the Budget and the Committee on Education and Labor, for inciting violence against fellow Representatives before the election; seven Republicans joined the unanimous Democrats in the vote to remove her from these committees. In response, Greene said, “In this Democrat tyrannical government, conservative Republicans have no say on committees anyway.”

Throughout her short time in the political limelight, Marjorie Taylor Greene has proven to be one of the most divisive and controversial politicians in history, with Senate Minority Leader Mitch McConnell (R-Kentucky) going so far as to state that “loony lies and conspiracy theories” are a “cancer for the Republican Party.”

However, over the past four years, far-right political views have been finding more and more of a voice in Washington, D.C. In fact, Greene has stated that she intends to push the GOP even further right.

With Republican leaders like Kevin McCarthy (R-California) seemingly unwilling to reprimand members of their own party, it’s unsurprising that people like Greene find a place in the U.S. government, and will likely continue to do so for many years. Eyes are on Greene to see what role she will play in Congress over the next few years.