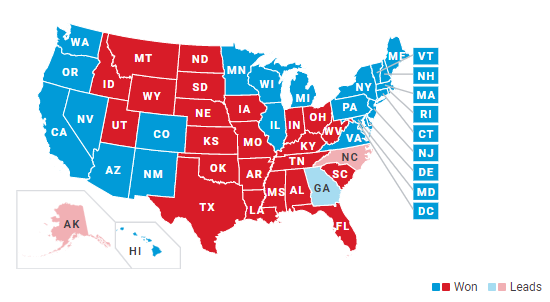 The Electoral College: Did My Vote Matter?

This past week, America was in a heated argument about who would win our 2020 presidential election. While it took several days to declare a winner, we soon began to see the gaps between the candidates growing smaller and smaller in the battleground states. States like Nevada, Georgia, North Carolina, and Pennsylvania quickly became the focal points in the election.

The wait to see what would happen raised questions from people on both ends of the political spectrum about the Electoral College, how it works, and why we even have it.

Images like this have led people to ask one big question: Did my vote even matter?

The answer is yes!

While each county of each state does get a red or blue tint added to it, the states will vote by what their popular vote was. If a state had even one more vote for Donald Trump than for Joe Biden, all of that state’s Electoral votes went to Trump. This exact reason is why Biden won states by only getting urban and suburban areas, while Trump primarily gained rural regions with smaller populations.

But this does not mean that the rural regions don’t have a fair say in the election. In 2016, Trump won an overwhelming amount of votes in rural areas, while Clinton won very few. This is exactly how Trump beat Clinton. Looking back to 2016, President Trump won the election not because of the American people, but because of the Electoral College. He was able to win big points by winning an overwhelming majority of votes in rural counties that outvoted the large Democratic cities. This led to a unique situation where the President won the election, but lost the popular vote.

As stressful as a candidate winning the popular vote but losing the Electoral College may feel, it is actually so rare that it has only ever happened five times in American history. The most recent time is relatively fresh in voters’ minds as it was only four years ago in 2016.

This isn’t how American elections have always been. Prior to the 12th Amendment, the candidate who won 2nd place would become the Vice President. However, when the 12th Amendment was ratified in 1804, this changed. Candidates began to select running mates. In contemporary elections, the American people expect a candidate to announce who they have chosen to be their Vice President should they win. The process of choosing a running mate can be long and stressful for a candidate, as it will likely affect who votes for them.

At the end of the day, the Electoral College is not a perfect system. There are both arguments for and against having it in place. It is uncertain as to whether or not the Electoral College will stay in place for all of American history, but make sure you know one important thing…Your vote matters. If people’s votes and voices did not matter, we would have stopped counting the votes in the undecided states long before we declared a winner.