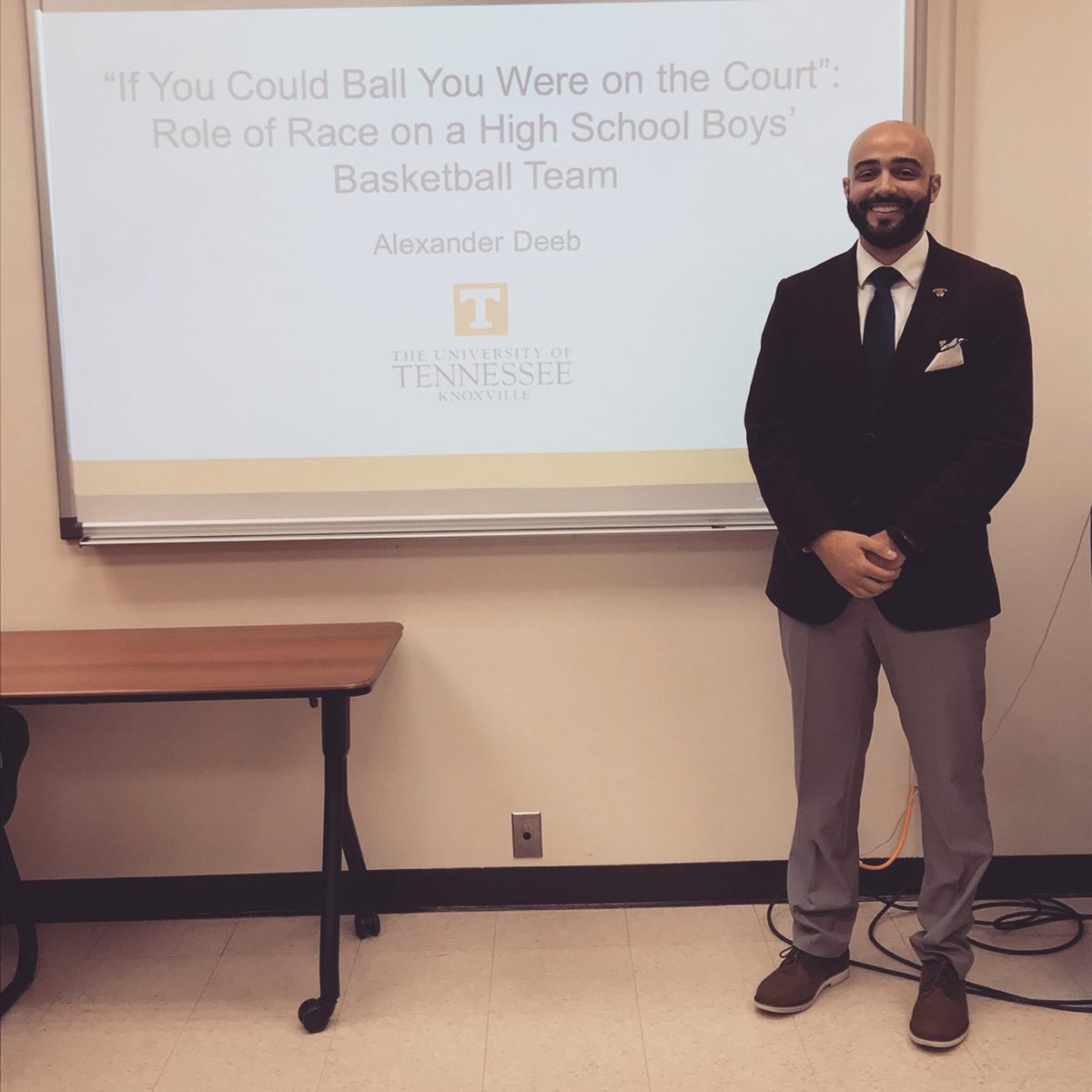 “You Can Call Me Alex”

A sports lover, a member of Alpha Phi Alpha Fraternity Inc., and a fan of ABC show “Psyche,” here’s what you didn’t know you wanted to know about the new Director of Campus Life and Inclusion, Dr. Alexander Deeb.

Dr. Alexander Deeb has always loved sports for many, many reasons. It began when he would watch football on Thanksgiving in Indiana as a child. He fondly remembers watching the Indianapolis Colts (he remains a die-hard Colts fan to this day)–back when Payton Manning was the quarterback–with his uncle.

In fact, he loved sports so much that it would impact his career aspirations.

“I can have a conversation with almost anyone, as long as we can find a common ground,” Deeb said. “That’s why I like sports.”

Sports help us learn about and understand each other, and Deeb was starting to value understanding student experiences, race, and other pieces of our society as he continued his studies.

He eventually found himself on a new path after graduating with his Masters’ Degree. Sports would always play a huge role moving forward, but the reason why he really loved sports would be the very reason why he would change his path: people.

He eventually found himself on a new path after graduating with his Masters’ Degree. Sports would always play a huge role moving forward, but the reason why he really loved sports would be the very reason why he would change his path: people. ”

If we’re talking about forces that influenced his decision to start on a path where he would eventually become Millikin’s Director of Campus Life for Inclusion, it would be impossible not to mention an undeniably profound experience: becoming a member of Alpha Phi Alpha Fraternity, Inc.

“I can trace a lot of my life decisions back to joining APA,” Deeb said.

Dr. Deeb is biracial, and found his home with APA when he went to Bradley University. After that, at Western Illinois University, his program coordinator, the Vice President, and the President of the University were all Alphas who impacted how he approached his education and career.

His next step would take him to the University of Tennessee, Knoxville where he earned a Ph.D in Kinesiology and Sport Studies with a specialization in Socio-Cultural Studies in Sport. Here, he would grow more aware–and more concerned–for athletes and the student experience.

“You watch someone you know and you’re more deeply affected,” Deeb said. “If they have a great game, you know that you will see them two days later and can tell them, ‘Great job!’ But you also think, ‘Wow, I know this player. What if they get hurt?’”

Deeb cares a lot for the students who he encounters. He has seen entire generations of students come and go in the last few years, noticing in the process a distinct change in students’ attitudes.

“There’s a little more awareness of the anxiety that students face, nowadays,” Deeb said. “Students often think about the future a lot more.”

That is especially true for Millikin students–and for the specific time that Dr. Deeb has joined the campus community. Not only has this summer been difficult for those impacted by COVID-19, but the Black Lives Matter movement now is more important than ever as peaceful protests and violent government backlash push these conversations to the forefront.

He has already communicated with several students this summer about how to make campus better for minority students.

He likes documentaries, but he also greatly enjoys more light-hearted movies that make commentary about the world.

Two that come to his mind are Marvel’s “Black Panther” and “A League of Their Own,” a movie based on the true story about the All-American Girls Professional Baseball League.

There’s a little more awareness of the anxiety that students face, nowadays,” Deeb said. “Students often think about the future a lot more.”

The topic of gender equality in sports is a topic to which Dr. Deeb pays close attention. Some problems that bother him include the pay gap between WNBA and NBA, and how the Women’s USA soccer team is paid much less than the men’s soccer team even though they have a considerably better record.

Issues such as these now make Dr. Deeb’s relationship with sports more interesting–if not contentious.

“[Sports are] sometimes difficult for me to watch and not think about the social implications of it,” Deeb said. “Sometimes it’s hard for me to turn off that sociology part.”

And whenever he doesn’t feel like watching sports, he enjoys watching the ABC show “Psyche.”

“That’s the one show I can watch and always laugh, even though I know all the jokes,” Deeb said. The relationship between the main characters is similar to his relationship with his best friend.

Deeb also loves being a fan of athletes. He prefers following any person who gives him a good impression.

Keeping this in mind, he is a huge fan of LeBron James.

“It goes beyond what he’s done on the court to what he’s done in his communities,” Deeb said. “I love when there are athletes that use their platform in a meaningful way.”

Millikin will be the first time he works with Division-3 athletes, having always gone to or worked at Division-1 schools. He is excited about the opportunity because it is a big change.

“Though athletes at a Division-1 school receive a lot of attention, they really make up a small, small percentage of the students at the actual university,” Dr. Deeb said. “Athletes make up a much larger percentage of Millikin’s student population.”

Though he will be a resource for every Millikin student, he will also specifically be the Diversity Delegate for Millikin Athletics, which involves helping facilitate conversations concerning race, class, gender, and similar topics. He thinks that Millikin is a good place to have these conversations.

“I just recently finished my 2nd month and it feels like a place where people want to be successful and they’re also willing to work with you,” Dr. Deeb said.

His first semester will come with obstacles and challenges. He feels disappointed on behalf of the student athletes whose fall season was just postponed. Still, he will be striving hard to utilize technology to reach the students. He encourages all students to do the same.

“It might feel really difficult to carry on through this pandemic, but technology has enabled us to maintain connections that we couldn’t have 10 years ago,” Dr. Deeb said.

He encourages all students to stay connected to each other, maintain friendships and connections with family, and keep communicating over the course of this semester.

One way to stay connected with the conversation on-campus and to meet Dr. Deeb remotely is to join the social justice book club, which he facilitates over Zoom. They are currently reading one chapter of “How to Be an Antiracist” per week and will continue throughout the semester.