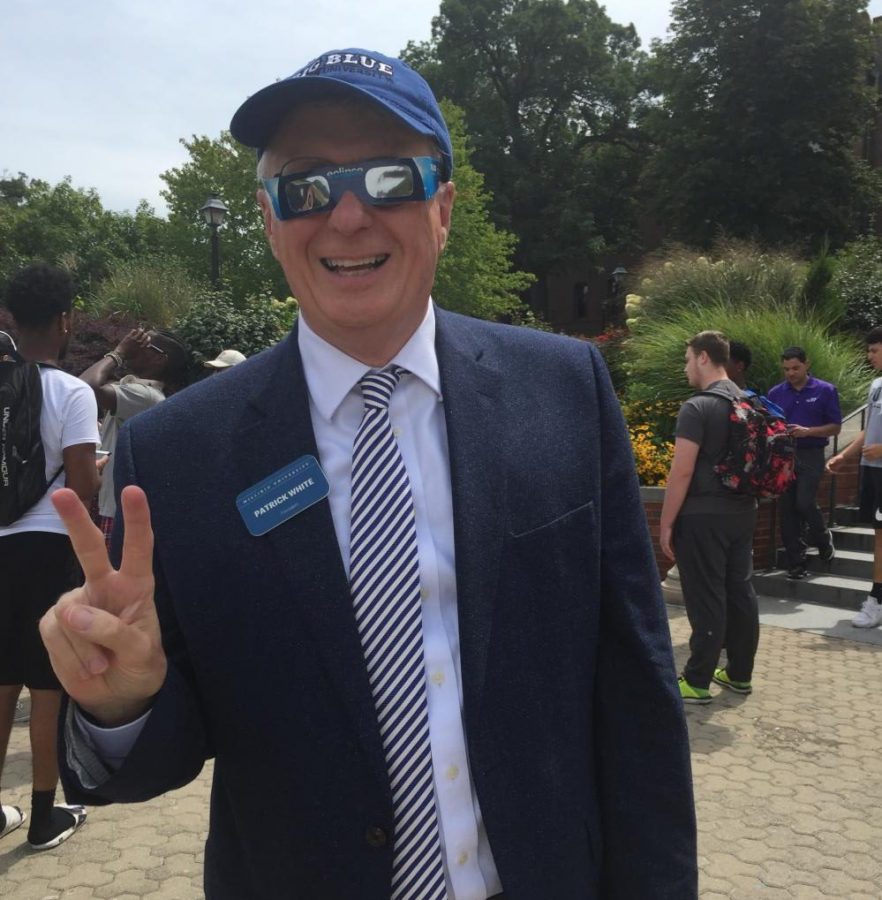 President White spreading peace at the 2017 Solar Eclipse: an event that packed the quad on the first day of classes.

President Patrick White announced his retirement last year and people knew there was a lot to be done. Speculation about who the new president would be cycled through campus and the presidential search committee formed to begin the process of interviewing candidates.

Meanwhile, White prepared for the end of his presidency.

With Dr. James Reynolds slated to take over as Millikin’s sixteenth president in July, White can now pause to think about what he leaves behind – and what will come next.

“I always say I’m holding a mirror up to Millikin,” White said. “Ah, there you are, Millikin. This is who you are. This is who we are together. And this is a really, really cool thing to be.”

In 2013, White took the position of interim president at Millikin after serving as the president at Wabash College for seven years. He expected to be in Decatur for only a year. Seven years later, most people in the Millikin community will agree that he has had lasting effects on the university.

But White also feels that Millikin has had a profound impact on him, and he plans to stay connected to the university.

“I hope to keep in touch with Millikin and Millikin students about what they’re about, but I also recognize that the most irrelevant person on the planet is an ex-president,” White said. “It’ll be the Jim Reynolds show in a few months, and that will be exciting, too. Just like the previous president has been very kind and supportive to me, I hope to be kind and supportive to Jim Reynolds.”

While excited about meeting Reynolds and welcoming him to campus, students will be sad to see White go. Student leader JaCarla Anderson appreciates the work that White did to help minority students on campus.

“President White was very understanding of students – the minority students, the underrepresented students, not just the majority,” Anderson said.

She wants Millikin’s campus to feel like a safe place for everybody. Although she is skeptical of the new president after hearing her friends’ opinions of him from the student forums, Anderson hopes that Reynolds will also prioritize inclusivity. She trusts the unanimous decision made by the Board of Trustees.

“I’m a firm believer that God makes everything happen for a reason, so there’s a reason why this guy was picked to be in office,” Anderson said. “If they picked him, I’m sure it’s for a good reason. And I just can’t wait to see what the reason is.”

Rubi Rodriguez, another senior student leader, was a member of the presidential search committee. She also recognizes White’s impact, and she hopes that the next president will have the same influence on students while prioritizing the issues that they care about.

That “Millikin energy” is hard to define, but most students would argue that it is a university’s president who sets the tone for the institution. Students appreciate the tone that White has set, particularly through his involvement on campus and his devotion to students.

“As Millikin students, I think we can all agree that our interactions with President White are amazing,” Rodriguez said. “You see that blue hat walking around and you feel good about it.”

That iconic blue hat has become one of White’s many symbols. He jokes about the significance of his headwear.

“Obviously, it’s a thing now. I can’t go outside,” White said. He remembers once when he lost the hat at a fundraising event in Florida. “It felt so naked.”

As he prepares to hang up the hat for good and retire, people wonder if he will have that feeling of something missing. But after a lifetime in educational settings as a student, teacher, administrator, and president, White is looking forward to retirement.

“I don’t want anybody to feel sorry for P. White, but it’s a tough gig,” White said. “It’s tough because it’s relentless…You’re very rarely off duty, and you’re certainly not off the worry duty about admissions, about fundraising, about what’s going to happen on a weekend when everybody’s having fun. And I just think in my 14 years as a president, it’s been a lot of work. So I’m going to miss it, and I’m going to miss the students…but it’s time.”

Although White has worried about Millikin throughout his time here, he feels assured that he is leaving the institution in safe hands. White anticipates that Reynolds will be a good fit for Millikin, and he looks forward to supporting him.

“I’m very happy with the choice of Dr. Reynolds,” White said. “He’s got the demeanor, disposition, and intelligence to engage, guide, and move this institution forward.”

As White approaches his last few months at Millikin, he is preparing for his life after retirement. He and his wife, Chris, plan to move to South Bend, Indiana to be closer to their three children.

Several friends have suggested that White will be bored with his free time, but he disagrees. He was once an English professor, and he plans to read as much as possible. In addition to reading “War and Peace” by Leo Tolstoy, White also wants to study calculus, and he might pick up the guitar again. He used to play his own songs in coffeehouses while working on his undergrad at the University of Chicago.

But no matter what White chooses to do, he is looking forward to retirement after a long career in higher education. He believes that he is leaving Millikin in a good place. As he considers his legacy, he looks forward to the future.

“I’ve been doing it for seven years on all the student visit days, I say to everyone in the room, ‘You have no idea how good you are,’” White said. “I think this university is only beginning to glimpse all the things it could be. And if I could say anything, I would just want us to continue to be as ambitious as we possibly can for this great university. Our best days are ahead of us.”