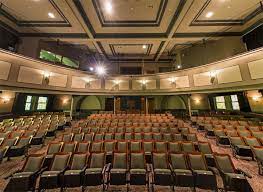 The Millikin School of Theatre and Dance version of “A Doll’s House, Part 2” discusses the importance of individual freedom and love.

“I thought it was beautiful,” junior theater performance major Rebecca Murphy said after the show. “It was a beautiful variety of opinions on the way people live their lives.”

Based on the play “A Doll’s House” by Henrik Ibsen, “A Doll’s House, Part 2” takes place 15 years after main character Nora Helmer leaves her family. She struggles to reconcile with her daughter, Emmy, and her ex-husband, Torvald.

“I loved it,” English literature major Sophie Nicholson said. “I thought all the performances were spectacular.”

Starring Zack Scott as Torvald and Chloe Fisher as Nora, audience members thought their performances were one of the highlights of the show. Viewers believe that Fisher and Scott do a great job bringing the characters to life.

“I think Zack and Chloe have really good chemistry,” Nicholson said. “You can feel their relationship and their history.”

Audience members believe that Scott’s portrayal of Torvald is a refreshing take on a complicated character. In Ibsen’s play, critics felt that Torvald was condescending towards his wife. This play changes Torvald and his relationship with Nora.

“It’s a little bit different from the original and that I feel like I can sympathize with Torvald,” Nicholson said.

Audience members also connected with the themes of the play. “A Doll’s House, Part 2” focuses on the importance of interpersonal relationships between the characters.

“It was this lovely discourse on relationships,” Murphy said. “A Doll’s House, Part Two” emphasizes how the law affects love. Murphy believes the play did a great job discussing the judicial system and love.

Other audience members focused on the importance of individual freedoms. Both Torvald and Nora struggle with societal expectations because of their genders. Nicholson thinks that this play’s main focus is the role men and women play in society.

“I think a large part of it is about autonomy, and a person’s freedom and their duty to themselves versus the duty they have to other people,” Nicholson said.

SOTAD’s next performance will be “Romeo and Juliet” on April 7th–April 9th.