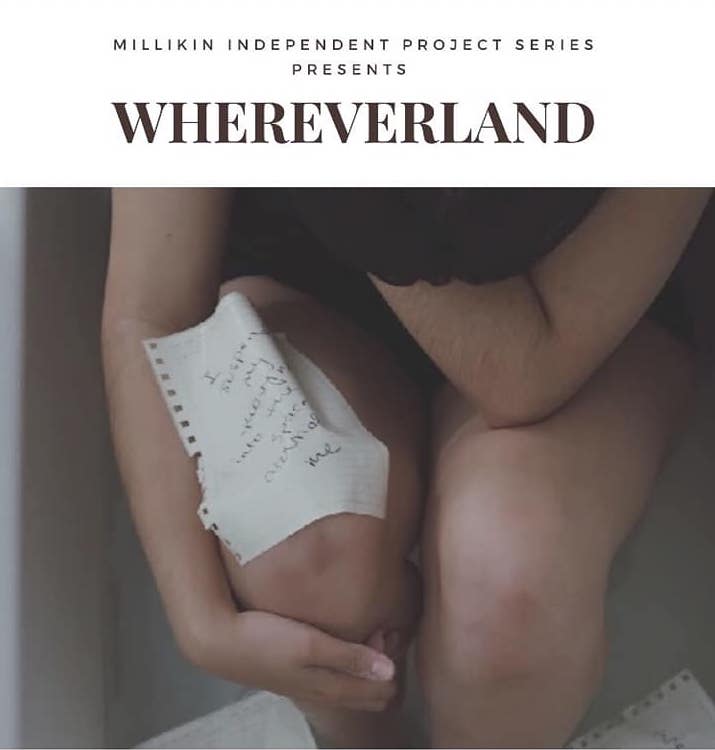 On Friday, October 29th, I had the opportunity to see “Whereverland,” an original musical written and directed by Maya Gómez, a current sophomore, with music production by Luca Gómez. It starred freshman Ava Grimes as Monica and featured Julien Harris as James, Aspen Hegarty as Ruby, Conner Schroeder as Tristan, Gabe Henderson as Hayden, and Raeven Carroll as Monica’s Therapist. “Whereverland” ran for roughly an hour and a half with a brief 10-minute intermission. Friday’s performance was the production’s one and only live performance, but it was filmed and will be made available on YouTube at a later date.

“Whereverland” is a heartfelt and touching story that discusses issues such as mental health, emotional abuse within relationships, and the healing power of art. It centers around Monica, a 19-year-old poet with obsessive-compulsive disorder who’s struggling to heal from a previous abusive relationship. She takes refuge in her bathroom, writing poetry to try to work through her emotions, shielding herself from the outside world by secluding herself within those four walls. When she reconnects with James, a boy she knew in high school who plies her with seemingly-sincere compliments and smoldering glances, she leaps headfirst into this new relationship over the protests of her younger brother Tristan and best friend Ruby. However, we soon learn that James is not as sweet as he seems, objectifying Monica behind her back and ignoring her whenever she loses his interest, even verbally abusing her when she expresses frustration with how she’s being treated. Eventually Monica reaches her breaking point and breaks up with him in an explosive confrontation, but crumples into a tailspin once he leaves, the slow progress she’d made since the end of her last relationship destroyed in a few short weeks. With the support of her therapist and Tristan and Ruby, however, Monica finds the strength within herself to start to heal again, and at the musical’s conclusion, finally stands up from the seated position she’d remained in throughout the show, illustrating her growth from the first lights-up.

“Whereverland” was told through a blend of free-verse poetry and simple, melodic musical theatre ballads, with occasional moments of back-and-forth dialogue. Gómez employed a few musical motifs, with certain melodies associated with different characters recurring over and over, all arranged simply for piano and voice. While I would have appreciated some more complexity and depth to the arrangements of the songs – by the end of the show, the music had begun to feel slightly repetitive in part due to its stripped-down nature – the melodies were beautiful and the lyrics poignant in their simplicity.

Gómez’s writing is really shown off in the poems, however; there were several points throughout the performance where certain lines and phrases hit me like a punch in the gut. One exchange during a conversation between Monica and Ruby was especially powerful; as Monica spirals down into an OCD-fuelled anxiety attack, she repeatedly questions whether she took her medication before asking, anguished, “Is my medication taking me?” That exchange in particular made me wish that Monica’s experience with OCD were explored more throughout the show; though it was mentioned, it felt more like a designated “problem” for Monica to overcome rather than an integral part of her character, and there were a few lines where a mention of her official diagnosis felt like a tacked-on reminder to the audience rather than a genuine expression.

While the entire cast was extremely talented, Ava Grimes particularly shone as Monica, bringing a tender, raw essence to the character that never became saccharine or overwrought. Grimes’ clear soprano added weight to some of the more simplistic lyrics, and effortlessly transitioned between a light, delicate mix and a powerful mix-belt. Monica remains onstage throughout the entire production, and not once did Grimes falter or break character, nor did she fade into the background; even when she was not the primary focus of a scene, I was always aware of her presence anchoring the production. Grimes’ presence was shockingly mature for a first-semester freshman, making me eager to watch her continue to grow as a performer over her time at Millikin.

As for the rest of the cast, Connor Schroeder brought a winning mix of earnestness and sarcasm to younger brother Tristan, providing several moments of levity that added to the depth of the show while also contributing to the realism of the relationship between the siblings. Aspen Hegarty gave tough, take-no-shit Ruby a gentle core; her interactions with Grimes’ Monica were a delight to watch due to the familiar rapport between the actors and characters. Julien Harris excellently captured the duality of “James from high school”, sliding effortlessly from boyishly impetuous to carelessly menacing in the span of a few seconds.

I had the opportunity to speak with Gómez about the writing process for “Whereverland” and her origins as a writer, poet, and composer. Gómez said that she’s been working on “Whereverland”, her first full-length musical, since “last spring”. While she first started writing songs in middle school, it was in kindergarten that her love of writing stories began. “My kindergarten teacher would give out prizes to those who wrote stories,” she said. “The teacher had to limit me to how many stories I could write in a week because she only had so many prizes to give out.”

When asked why she wanted to tell this story, Gómez said, “[It’s] very personal to me. I’ve had a history with verbally abusive relationships, and I want to inspire those who were in those types of relationships to speak up and to realize they’re not alone. I also wanted to tell this story in case an audience member is in this situation and doesn’t actively realize how bad it is. That was me.”

Gómez’s biggest challenge in taking “Whereverland” from script to stage was distance; her brother Luca did the orchestrations, but they were forced to work together remotely over FaceTime to produce the backing tracks, which is not very conducive to the collaborative process.

I asked Gómez what advice she would give to aspiring writers; she responded, “Write, write, write! Write even when you don’t feel like it. Write when you do feel like it. Write in the space in between. Write for fun when you have the time to.” She went on, “I started this project with a silly little scene that turned into a full-length musical. It was scary to write about something so personal to me. If it feels scary, don’t be afraid to let your voice be heard (as long as it’s healthy for you — don’t push yourself if it feels unhealthy).”

Overall, “Whereverland” was captivating; while it was evident that the show as a whole was still in development, the essence of the story was deeply moving, and the performers brought out the heart of the work. I look forward to seeing more from Maya Gómez in the future, and commend the entire cast and crew on a show well done.