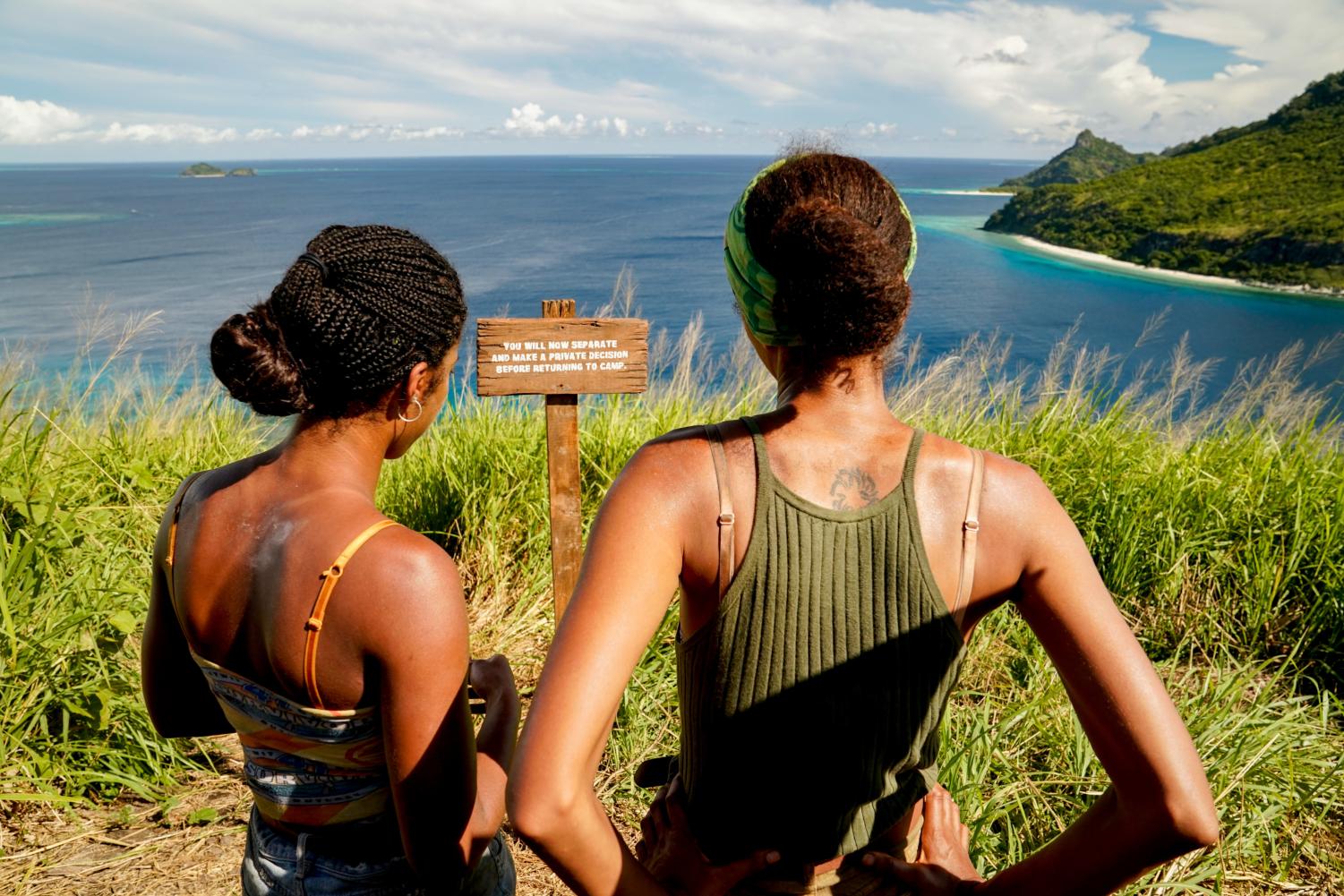 Fire in the Form of Print: Survivor 41 Episode 5

Two great episodes in a row? I simply MUST be dreaming!

After stumbling slightly around Episodes 2 and 3, Survivor 41 has hit its stride in the last two weeks. The edit seems to have become more focused, with all three tribes receiving ample airtime, and the advantages, though still present, have stopped overshadowing the individual cast members and instead are now inciting conflict and strategy, as was likely their intention.

As with last week, we also ended the episode with an unpredictable pre-Tribal scramble, which ended in probably the most emotional vote of the season so far.

EPISODE 5: “The Strategist or The Loyalist”

The day after Tribal Council, the Ua Tribe is in high spirits. Genie is glad that she wasn’t blindsided this time, and expresses gratitude to both Ricard and Shan that she’s still here. She then ventures off to try to find Brad’s Beward Advantage, which she believes must’ve been rehidden after he was eliminated.

Genie’s intuition pays off! Near the tribe’s well, she finds the Beware Advantage and runs back to tell Shan and Ricard. They all debate picking it up, but Shan, in order to prevent Genie from acquiring any sort of power, makes the decision that they will leave it alone for now.

Behind Genie’s back, however, Ricard and Shan, out of paranoia, decide they’re going to open the advantage and try to reseal it with a fake idol. Shan takes the advantage, revoking her right to vote for the time being, and gives her Extra Vote (which she took from JD) to Ricard. Through all of this, Genie is none the wiser. Ricard even tells Genie that Shan is going to speak their tribe’s code phrase, which he claims is to try to discern if Luvu has found their idol, and Genie is completely on board for this plan.

Meanwhile, on Luvu, Deshawn and Danny again debate the merits of throwing the next challenge, in order to vote out Erika. They then try to convince Naseer to throw, with Danny arguing that the women could potentially have a number advantage over the men going into the merge, which could prove their downfall. Naseer, however, is wholeheartedly against throwing a challenge. He seems appreciative, though, that he’s finally being included in strategic conversations.

Then we get to Yase, where Evvie is attempting to smooth-talk Xander, in order to keep him comfortable before eventually voting him out. Tiffany, however, still finds Xander deeply untrustworthy, and she and Liana decide to dig through his bag. There, they find both his Beware Advantage and his Extra Vote; this further unites them, and they agree that voting out Xander needs to be their #1 priority.

Xander, funnily enough, decides that now is a great time to show Tiffany his Beware Advantage, claiming that she is “in the middle” (HAHAHA) and that he wants to gain her trust. He tells her that he found the advantage that morning, and he shows her the paper that came with it.

However, Tiffany quickly pieces together that Xander had already spoken his code phrase at multiple challenges, meaning he couldn’t possibly have only found the advantage that morning. He quickly backpedals and apologizes for lying. Xander seems entirely satisfied with this interaction; meanwhile, Tiffany mocks him to the cameras, right in front of him.

Then comes the Challenge! This is a combination Reward and Immunity Challenge: the tribe which places first wins a large tarp for their shelter, second place wins a slightly smaller tarp, and last place heads to Tribal Council.

Shan recites her code phrase, and Xavier quickly follows suit. For a moment, it appears that nothing will come of this, but Naseer suddenly chimes in with Luvu’s code phrase as well!

We are treated to a flashback to the day before, where Naseer finds the Beware Advantage on the Luvu beach. He, of course, is elated, describing how his daughter used to make her own idols and have him try to find them. Even with his vote held hostage, he is overjoyed, exclaiming, “I love this game!”

Luckily for Naseer, his reciting of his phrase activates all three idols at once, meaning that Naseer, Xander, and Shan all have working immunity idols, on top of being able to vote again.

The challenge gets underway, and, as usual, the Luvu Tribe takes an early lead, with Yase and Ua again playing for second. Yase, however, manages to steal their lead and finish in first place thanks to Xander, this time without anyone on Luvu trying to throw. Just like last week, it comes down to Naseer and one of the Ua members–in this case, Ricard–trying to throw bags faster than one another. Unfortunately, Ricard is unable to eke out a win, and Luvu finishes in second place, sending Ua to Tribal for a third consecutive week.

After the challenge, Probst then tells everyone that two people will be going on a journey and returning to the island we saw in the first two episodes. Since the Yase Tribe placed first, they were allowed to pick one member of Ua and another from any tribe. From Ua, they selected Shan, and from their own tribe, they selected Liana. Shan, in a confessional, expresses concern about being away from Ricard and Genie with Tribal looming, but says she is excited to meet Liana.

At the Summit, Liana and Shan quickly hit it off, bonding over their shared experience as women of color in the game. Shan then reveals to Liana that her idol is now in play, and Liana tells Shan about Xander’s Extra Vote. Shan also reveals that her mother passed away, and she and Liana share an emotional moment. Shan, in a confessional, describes her past as part of a gang, before eventually finding God and becoming a pastor.

Shan tells Liana to risk her vote, and that she’ll play it safe. As a result, Liana is given a new, incredibly overpowered advantage: the Knowledge is Power advantage. This allows her to ask one other player if they have either an advantage or an idol, and if they do, then it immediately gets transferred to her, but if they don’t, her power becomes null and void. Needless to say, this is an incredibly disproportionate amount of power to just dole out on an island that, in the past, has only ever given out Extra Votes.

The Luvu Tribe may have been represented the least this episode, but what little we saw was still incredibly compelling. Naseer had three confessionals, the most he’s received so far. Danny had two, mostly about his desire to throw the challenge. Sydney received one, focused on her remarkable fishing skills and how it empowers her. Heather, Deshawn, and Erika all received zero confessionals, however, which was slightly disappointing.

For the first time since Episode 2, Yase wasn’t the least edited tribe! Tiffany received four confessionals, and has been the most consistently represented member of the Yase Tribe for the last three members. Xander and Liana both received two, mostly related to their conflict. Evvie only received one, but funnily enough, they had enough from just the first two episodes to still make them the Survivor 41 contestant with the second-most confessionals.

And, of course, the dumpster fire that is the Ua Tribe rages on. Don’t get me wrong, Ua is far and away my favorite tribe this season, but my GOD, they just keep losing and losing.

After the challenge, Shan is still on her journey, allowing Ricard and Genie to have a few quick conversations. Ricard begins throwing Shan under the bus to Genie; in a confessional, he clarifies that he wants Genie gone, but he doesn’t want her to know that. Genie, for her part, sees this as ammunition she can use to get Shan on her side.

Once Shan returns to camp, Genie pulls her aside and tells her that Ricard was dragging her name through the mud. Shan, concerned, decides to try to pressure Ricard into giving back the Extra Vote.

Immediately, this raises red flags for Ricard, who points out that this is exactly what she said to JD before she blindsided him. Shan quickly gets frustrated and accuses Ricard of wanting to vote her out, while Ricard refuses to back down, stating that transferring the Extra Vote gives her no good reason to keep him. Right before Tribal Council, Shan is still slightly torn, stating, “Do I bring the strategist or do I bring the loyalist?” (hey, that’s the name of the episode!)

At Tribal Council, there is no beating around the bush: everyone is sweating tonight, and they aren’t afraid to say it. Shan openly admits that she tried to get Genie and Ricard to vote against one another, to which Genie responds that Shan is absolutely in the power position. Probst also brings up the fact that whoever goes tonight probably won’t be in jury, to which Ricard responds that, regardless, you have to live with the consequences of your actions at Tribal, since you still have to live with everyone who isn’t voted out.

The votes are cast.

Probst returns with the urn.

He asks if anybody is going to play an advantage.

No Shots in the Dark, no Immunity Idols, no Extra Votes.

Probst proceeds to read the votes:

Genie is frustrated, but ultimately she wishes her tribe well. Shan is visibly emotional as Genie’s torch is snuffed, and the tribe of three becomes a tribe of two. Ultimately, it appears that the Strategist was more important in Shan’s mind.

Shan was the star of Episode 5, with 13 confessionals, as many as the next four highest combined; she also has the most confessionals of any contestant this season, with 30. Genie received four confessionals, largely to do with the Beware Advantage and her pre-tribal scramble, and Ricard received three, which were mostly the same.

This was a solid episode! Not quite as exciting as Episode 4, but by the end, I still found myself largely satisfied. I am, however, deeply worried by the preview for next week, which implied that some sort of tribe shuffle is happening; in particular, Evvie stated that there has “never been anything like this before.” I’m concerned this will interfere with the normal flow of the game, and, like many of the advantages this season, will overshadow the contestants. I was also unimpressed by the Knowledge is Power advantage; I can only hope it won’t end up amounting to much.

However, the character work we received this episode was really fun, especially as it related to the brewing tension on Yase and Luvu.

Thanks for reading once again, and I’ll see you all next week for Episode 6, “Ready to Play Like a Lion.”