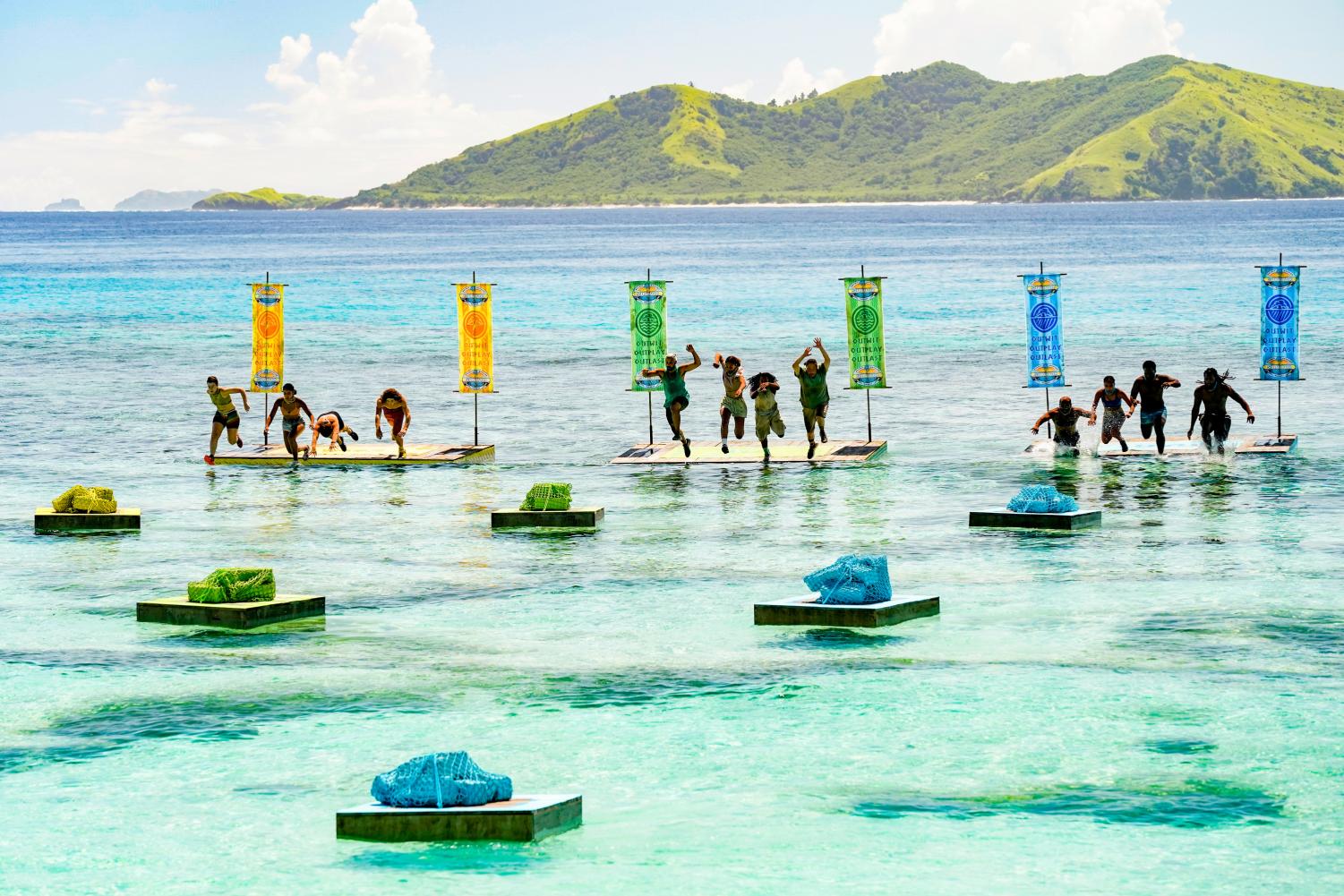 The three tribes compete for immunity.

Fire in the Form of Print: Survivor 41 Episode 4

“Blindsided! Nice! Now THAT’S how you vote somebody out!”

This episode was such a breath of fresh air! No new advantages or powers to have to explain, no trips to random islands; instead, we got a full hour focused on the cast and their relationships. I’ve thoroughly enjoyed this cast since the premiere, and to finally have an episode where they were actually the primary focus was thoroughly enjoyable, to say the least.

Not only that, but the whole thing was capped off with a brutal blindside, all framed by one of the best narrators the show has ever seen.

EPISODE 4: “They Hate Me Because They Ain’t Me”

We open immediately after the Ua Tribe returns from Tribal Council, with Genie voicing her belief that she’s on the bottom of the tribe’s structure. Shan also tells Genie that Brad was hiding two advantages from her, leading a frustrated JD to ask why he was raked over the coals for hiding his extra vote. Genie also states that she doesn’t plan to cook for the rest of the tribe anymore if she has no chance of staying in the game.

We then cut to our first Reward Challenge! The tribes will be competing for the privilege of having a native expert come to their camp and teach them about island living. The second place tribe will receive a fish (yes, you read that correctly, a single fish).

Though the tribes were neck and neck at the start, this quickly devolved into one of the most lopsided challenge losses I’ve ever seen. Luvu, who have not lost a single challenge up until this point, find themselves completely unable to advance past even the first phase of the challenge, largely because of Heather. Ua sails to an easy first-place finish, and Yase finishes closely behind.

After Luvu’s defeat, Heather breaks down crying, feeling that she let the rest of the tribe down. Danny and Sydney encourage her, with Danny telling her that as long as she gave it her best, it wasn’t a failure. As the tribe walks to their mat, even the Ua and Yase tribes give Heather words of encouragement. Heather eventually comes to terms with the loss, stating that, at the age of 52, she’s still doing a damn fine job. As the Luvu Tribe returns to camp, she states in her confessional that “this personal victory made me even stronger.”

The Yase Tribe enjoys cooking their (single) fish, but in the middle of their feast, they stumble upon a large number of baby turtles all hatching out of the sand on the beach. They begin cheering them on and, in a confessional, Evvie compares the Yase Tribe to those turtles in that, despite having the odds against them, they’ve managed to make a significant comeback.

Meanwhile, Ua enjoys the company of their native expert Nathan and his feats of athleticism, including climbing down a tree upside-down! He teaches them to catch fish, shows them how to cook properly, demonstrates how to break open coconuts, etc. Ricard marvels at all the skills he’s teaching them, stating in a confessional that he’s not too worried about losing Genie, since Nathan’s teaching should help the rest of the tribe pick up the slack.

While the other tribes enjoy the fruits of their labor, the scheming and plotting which has defined the Luvu Tribe reaches its breaking point. Erika worries that Sydney’s emotional instability is going to sink the tribe, so she tells Deshawn that they need to eliminate Sydney as soon as possible. Deshawn, however, is allied with Sydney, so he immediately runs back to her and tells her that Erika threw her name under the bus. Deshawn, Sydney, and Danny discuss their best course of action, and it’s at this point that Deshawn raises the possibility of throwing the next immunity challenge in order to vote Erika out of the game. However, Danny is very hesitant, stating that though it makes strategic sense, it goes against his better judgment.

Then, we get to the Immunity Challenge! Throughout the challenge, Deshawn and Danny attempt to slow down the rest of their tribe, but somehow, the Yase Tribe still can’t manage to get ahead for a while. It’s at this point where Naseer proves his incredible challenge abilities, single handedly pulling the tribe forward in the challenge. Yase, for the very first time, manages to finish the challenge first, leaving Luvu and Ua fighting for second. Deshawn intentionally messes up the final portion of the challenge, but Naseer eventually benches him and, miraculously, wins immunity for the Luvu Tribe! As a result, the Ua Tribe must attend their second consecutive Tribal Council, leaving them with only three members by the end of the night.

Even more than in Episode 3, Yase was largely peripheral this week. Evvie and Tiffany each received a single confessional as part of the turtle segment, while Liana and Xander were completely shut out of the edit. However, in the preview for next week, we were given a glimpse of tensions brewing as Liana and Tiffany snoop through Xander’s bag.

Finally, Luvu have their time in the sun! Every member of the tribe except for Naseer received a confessional, and even Naseer had his complete dominance of the immunity challenge. Deshawn was easily the most represented on this tribe, with nine confessionals. Danny received three, largely related to his reluctance to throw the challenge. Sydney and Erika both received two which were focused on their feud. Heather received one confessional, immediately following her emotional moment in the Reward Challenge (this marks only her second confessional all season). With 17 confessionals in total, the Luvu Tribe was only one behind the Luvu Tribe.

The Ua Tribe remains the definite focal point of the pre-merge this season, and I could not be happier. Immediately following the challenge, Genie attempts to pull JD to her side, stating that she’ll play her Shot in the Dark Die if he agrees to vote against Ricard. However, JD appears to have no intention of doing so, telling Ricard that his loyalty lies with him and Shan.

Genie also attempts to get Shan to vote against Ricard, but Shan pushes back, stating that JD is a lot less trustworthy. Shan is particularly concerned by JD’s Extra Vote, and hatches a plan to get him to give it to her for a second time.

At this point, Shan goes to JD and puts on an act, claiming that she thinks JD is working with Genie to try to send her packing. As is clear from his confessional, JD buys this hook line and sinker, voicing his frustration that Shan “freaks out so easily.” Eventually, Shan pressures JD to give her his Extra Vote, and after some persuasion, he finally gives in.

I really have to give some credit to the editors here: cutting back and forth between JD stating how genuine Shan is and Shan gleefully plotting against him was an absolute delight, and definitely the highlight of the episode.

Then, we get to Tribal Council, where the tension is palpable! Genie states that she’s on the bottom of the tribe, and is tempted to play her Shot in the Dark. JD attempts to dissuade her from doing so, urging everyone to “do what they said they would do.” Genie says she’s still undecided, and will probably make her choice in the voting booth. Before the voting commences, however, Genie shares a heart-to-heart with the rest of the tribe, stating how much she cares about each of them and how much she’ll miss them if she gets voted out.

The votes are read:

JD is completely caught off guard, asking his tribemates what their reasoning was but receiving no answer. With that, his torch is snuffed, and he leaves the game with Shan still in possession of his Extra Vote.

This Tribal Council was INCREDIBLE!!! The leadup to JD’s demise was immensely satisfying, and seeing Shan completely manipulate him only to cut his throat was almost scary.

We also got a glimpse of Ua in the promo for Episode 5, with Genie apparently finding a Beware Advantage.

JD was most represented in this episode, receiving seven confessionals, largely because of his loss of the Immunity Challenge and his blindside. Shantel was close behind, with six confessionals. Genie received four (her most so far!), and Ricard received one.

This. Episode. Had. EVERYTHING! I can safely say that Episode 4 was my favorite of the season so far, and though I was sad to see JD go, I must admit that his blindside was incredible to watch unfold. I’m definitely curious to see where the game goes from here. I was expecting a Tribe Swap of some kind this episode, but with none on the horizon, we may be in store for a swap-free season, which is absolutely fine in my book!

Thanks for reading, and I hope you’ll join me again for my recap of Episode 5, “The Strategist or the Loyalist”.