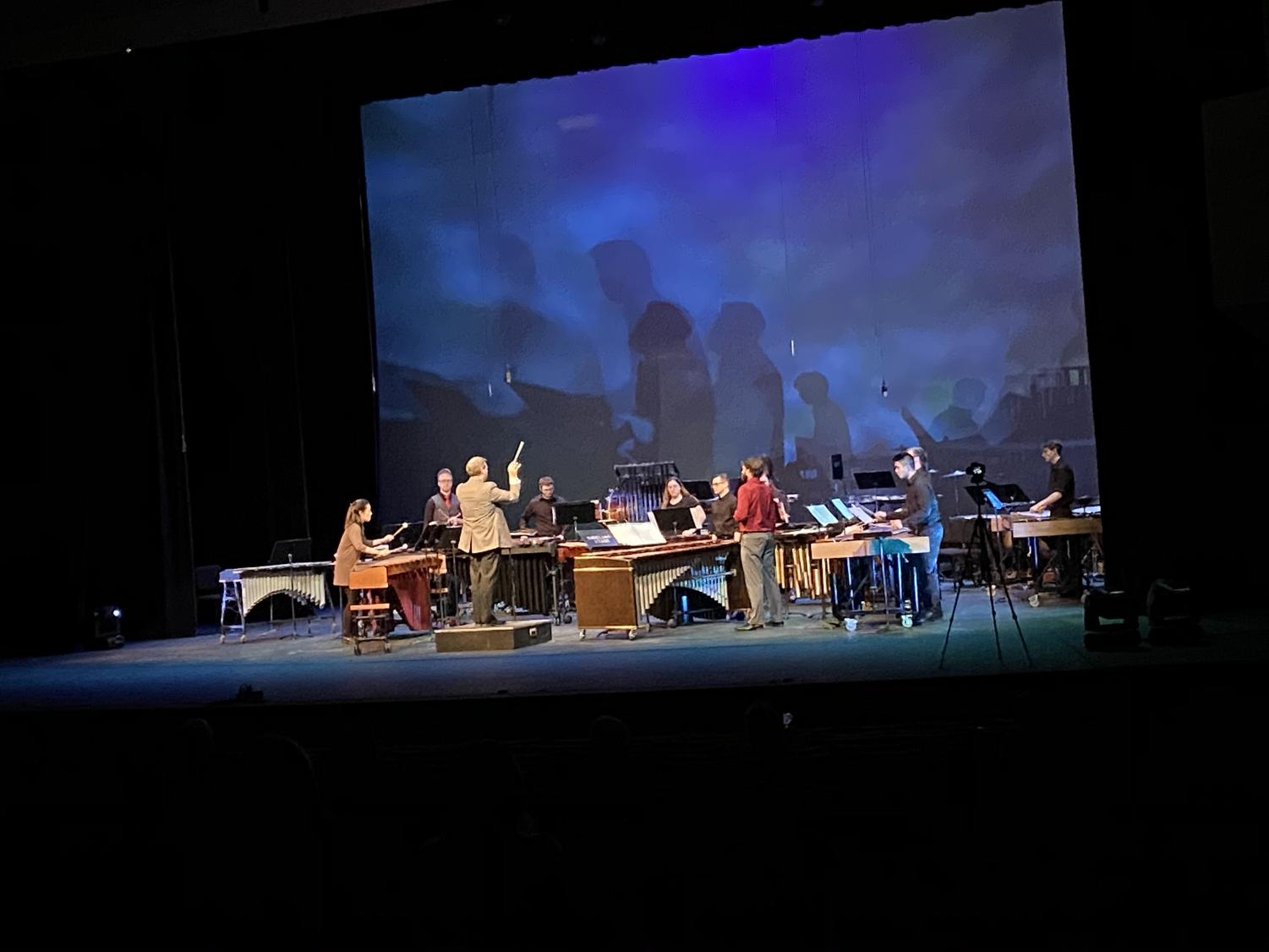 Thanks in part to performance-enhancing grants, a discourse in politics, and an environment thrown into chaos, the collective Millikin percussion ensembles presented a concert in Kirkland’s auditorium at 4 pm on Sunday, February 23, 2020.

The noon ensemble opens the concert with John Psathas’s “Cloud Folk,” featuring Lyn Sly on piano. The song features a hidden narrative about aliens who observe our planet from inside the clouds, but after seeing how the planet works, they want nothing to do with it. I followed one character’s story through the sleigh bells.

Throughout the song, the sleigh bells convey optimism only matched to that seen at Christmastime. Excitement rings in the air as his/her fellow comrades take on an epic endeavor.

In the middle of the song, where it takes a more sinister tone, those bells sound a little out of place. They even sounded sad near the end, where the xylophones and marimbas start to sound melancholy, as they lost all hope of earth ever being a peaceful planet.

As the song draws to a calm close, the sleigh bells start to sound cheerful again. Their comrades might have bet on the wrong horse with earth, but when opportunity knocks, hope revives.

A sense of whizzing energy remains consistent throughout the piece. It even included a technique I’m not sure I ever saw before: pulling a cello bow up and down the xylophone keys. It adds to the piece’s charm, giving a unique, haunting sound.

The three o’clock ensemble, under the direction of Aaron Villarreal, dominated the stage for the next few songs.

William Schinstine’s “Quadrum” presents a soldier’s march in its beat. Its beats are steady and give off a marching vibe. All the while, the gong’s shadow reminisces the French Revolution guillotine behind the percussionists.

Much like the northern lights, Marilyn Bliss’s “Aurora Borealis” is hauntingly beautiful, if not unpredictable. As Kirkland’s lights splash and mesh colors together on the screen, dissonant clashes on temple blocks and gongs fade into ringing wind chimes.

While it may not be his strongest quality as a performer, Paredes holds boundless energy when directing the ensemble. Paredes let loose but kept his arms focused on the rhythm. I could even tell he enjoyed working on this piece, for he, vibed well with the rest of the team and gave an enjoyable energetic performance.

After a brief intermission, the noon percussion ensemble and the Heartland Marimba Quartet take on the stage.

They premiered the Rivers of Rage Concerto, written by Matthew Coley, the HMQ’s artistic director. Before heading to Elgin, IL, for another performance, the HMQ stopped by to perform with Millikin’s percussion ensembles.

Coley conceived the piece out of his frustration of the U.S. political scene over the last four years. He also expressed hope for everyone to find a connection with the piece

Frustration and chaos permeate the concerto. Even when the percussionists play their instruments calmly, it’s an uneasy sort of calm before momentum picks up again, thrusting back into the chaotic climate. And even when it sounds like it could end, it keeps going, throwing the audience into a never-ending madness.

Not that endings are a bad thing. If anything, the semester just started for these combined ensembles.

Before intermission, Villarreal gives a shameless percussion plug. That’s right. You haven’t heard the last of this ensemble. This Saturday, February 29, 2020, the ensemble is hosting its first-ever percussion workshop. It goes from 9 am-5 pm.