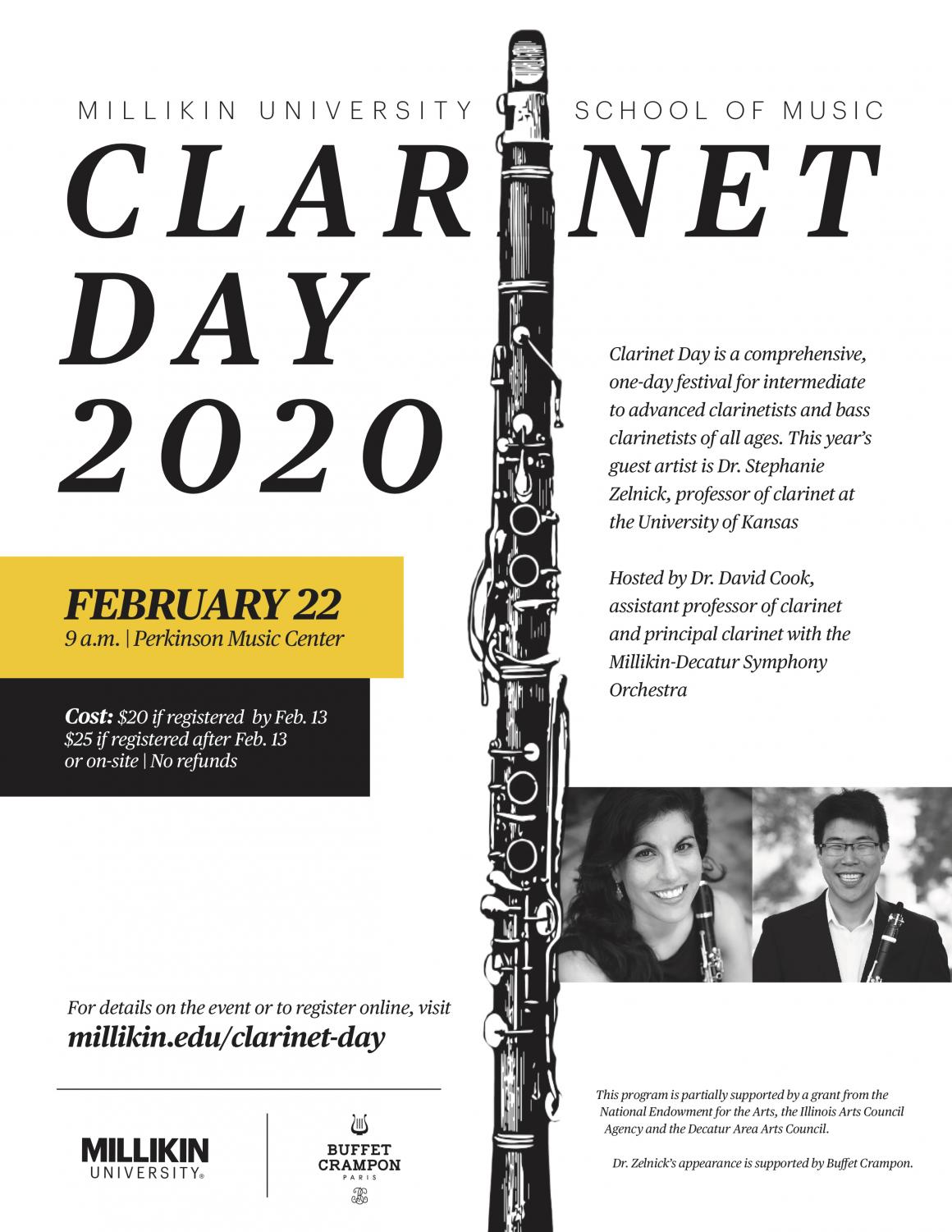 There aren’t many days devoted to the teaching or mastery of a single instrument, but Millikin is determined to have them.

Clarinet Day 2020 was on Saturday, Feb. 22nd. The event was hosted by Dr. David Cook, Millikin’s clarinet professor, and the MU Clarinet Choir. The guest artist featured was Dr. Stephanie Zelnick, an associate professor of clarinet at the University of Kansas.

“Clarinet Day is a celebration of the clarinet,” Cook said. “I’m a little biased, [considering it’s] my favorite instrument. It’s really a chance to bring a lot of students and community members and music educators to campus to learn about the clarinet and celebrate this great instrument.”

The day was “a comprehensive, one-day festival for intermediate to advanced clarinetists and bass clarinetists of all ages,” according to its advertisement. “Events for participants include masterclasses with Dr. Zelnick and Dr. Cook, breakout classes with Millikin University students and faculty, clarinet choir rehearsals, and exhibits for attendees to try clarinets and accessories (including Buffet Crampon, Vandoren, and The Music Shoppe, Inc.).”

“They had a great question-and-answer session with our current Millikin students about music, performing, performance anxiety, practining, life, you name it,” Cook said.

Most of the day was devoted to masterclasses and exhibits with the exception of the free and public concert, where all of the day’s hosts, guests, and participants performed. The concert took place in Kaeuper Hall around 4:00 pm.

The Clarinet Choir performed first under the direction of Cook. Cook transposed one piece, “The Spirit of Liberty,” for the choir specifically. Other pieces featured were “Symphony no. 7 in A major, op. 92: II. Allegretto,” “Turkish March from The Ruins of Athens, op. 113,” “Ave Verum Corpus,” and “The Spirit of Liberty.”

A special piece entitled “Festival Finale,” commissioned by Sy Brandon, was also performed. The Brandon piece was funded by a grant from the Co-op Press Fund Commission Assistance Grant Program.

After the choir performance, Zelnick performed with her piano accompanist, Dr. Tatiana Shustova, who is an adjunct faculty member here at Millikin. The pieces she performed were “Rendezvous,” “Prayer,” “Zwischenraum,” “Un Seul,” and “Sholem-alekhem, Rov Feidman!” During her performance, she moved and swayed along with the rhythm of her music.

“[I] feel like, sometimes with music, we feel like we just can’t move. And one of the most important things about music is inspiring dance,” Zelnick said. “[I] like picking pieces that are really visceral and moving. And that’s the fun thing about playing a solo recital, as opposed to playing in an orchestra, is you have a little bit more liberty to move with the music. [It’s] so fun.”

After Zelnick’s recital, the MU Clarinet Choir and all of the Clarinet Day participants performed together under the direction of Cook. He also transposed another piece for the ensemble,“Antique Airs and Dances: IV. Dance of the Drones & V. Masquerade.” Other pieces performed were “Scherzetto,” “Serenade no.11 in E-flat Major, K. 375: IV Menuetto II,” and “Celtic Memories.”

The event had many supporters besides Millikin’s own School of Music, College of Fine Arts, and the Admissions Department. Grants came from the Co-op Press Fund Commission Assistance Grant Program, the National Endowment for the Arts, the Illinois Arts Council, and the Decatur Area Arts Council. Other supporters included Buffet Crampon, The Music Shoppe, and Vandoren USA.

Both Zelnick and Cook agreed on the importance of funding for the arts, specifically music.

“You see how [music] affected people all the way from really young ages up to college students, and of course just a lot of the general public here as well,” Zelnick said. “You see how important this is that all of us are sort of sharing this common language of music. And it has such a potential to reach so many people, transform lives in a way that nothing else really does.”

“We live in a society right now where that’s being taught in schools, it seems like there’s always this goal of ‘what does this better me for?’” Cook said. “Those things like math, science, the stuff that gets you into college, and theoretically gets you a job, that’s the stuff that’s gets stressed and that’s the stuff that gets funded more. The arts are viewed as a luxury…Something for enjoyment, not something out of necessity. I disagree with that. I think [music] is as natural as speaking. We have something to express, so we say it. Music is not just a means to get a higher SAT score or anything like that. It’s about trying to say something that you can’t say in words itself.”