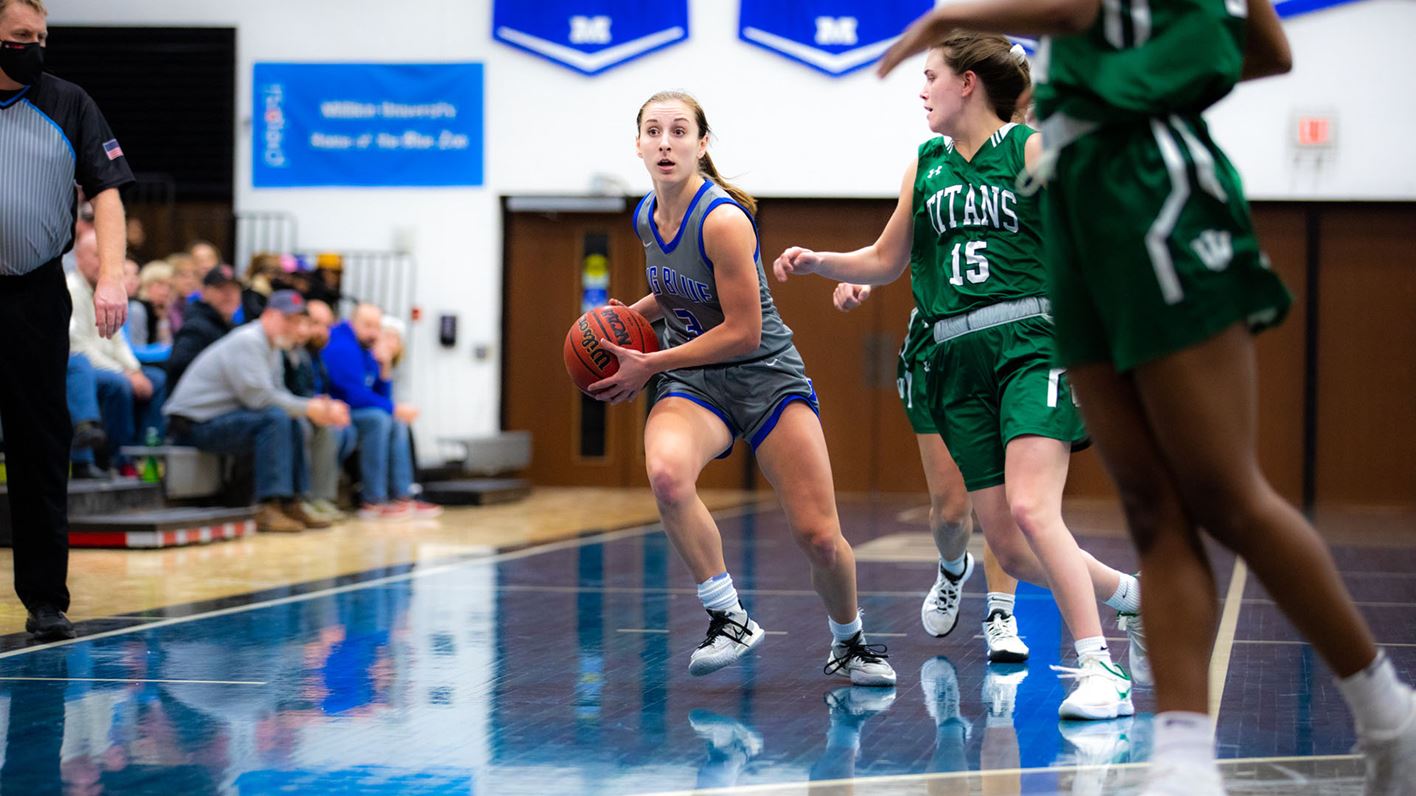 Over the past week I have heard the phrases “Tough loss against Hope” and “I bet you are super bummed the season is done” more than I can count. While the loss did sting, I don’t think about that night as a negative. All I remember is the amazing atmosphere and fun that I had.

It wasn’t until we played Hope that I truly realized that we had made the NCAA tournament. Playing against Wartburg and Eau Claire were both fun games, but the atmosphere in the Hope game surpassed those of the other two, engraining it in my brain forever.

On the day of the big game, as I jogged out on the court for warmups, I was shocked by the sights that I saw and the noise pulsating through the building.

At Hope College the bleachers surrounding the entire court were packed with enthusiastic fans. The opposing student section echoed with booing and yelling as we took the court. Hype music was blaring through the speakers. A big section of Big Blue fans was on their feet cheering, clapping, and welcoming our presence.

Adrenaline surged through my system.

It was in that moment that I realized how great of an accomplishment it was to make it to the Sweet 16. I was playing against one of the best teams in the country in one of the best atmospheres.

As usual, the polls predicted that we would get slaughtered by the Flying Dutch, but we tend to thrive in games like that.

In the opening quarter, there was a constant battle for the lead. Hope started the game off strong hitting multiple threes. On the other hand, our team was struggling to put the ball in the basket.

We were down 11-2 with 4 turnovers in our first 6 possessions, prompting Coach Lett to call her first time out. She gathered us around and said, “All right, now that the jitters are out, let’s go play some basketball.”

We walked back on the court with a different mindset. It was time to play Millikin basketball. We quickly rebounded from our slow start to finish the first quarter tied at 19.

We walked back to the bench with our heads held high. We had proven that we deserved this Sweet 16 berth.

The second quarter was a total battle. Hope exhibited their incredible athletic talent, but our team showed our unity and heart, battling to keep the score close. We high-fived after every play to motivate each other, executed backdoor plays to surprise Hope, and pushed the ball in transition to tire them out.

Millikin entered the third quarter with determination. Unfortunately, there was a 3-minute span of time when our team struggled to execute our offense and put points on the board. Hope used this lull to capitalize and increase their lead, finishing the third quarter ahead by 12 points.

Anyone who has watched our team realizes that we do not give up and will play basketball through the final buzzer. This game was no different.

While we were never able to overcome that 12-point deficit, we battled throughout the fourth quarter, getting defensive stops, hitting key shots, and playing our game. As a result, we lost that quarter by just two points.

When that final buzzer went off ending our pursuit of a National title, I watched many heads drop in disappointment. At that same time, I watched Hope players celebrate with relief. It was in that moment that I realized we had no reason to drop our heads.

We had just given Hope one of the best competitions they had faced this year.

Hope is a team with several fifth-year seniors playing key positions and compiling a three-year record of 77-1. They are the 2022 DIII NCAA tournament National Champions. Yet, we, the Millikin Women’s Basketball team, put up 77 points and ran with the Flying Dutch the entire game.

I am proud to say we made our first tournament berth since 2005; compiling two wins and making it to the Sweet 16.

We have put Millikin back on the map, created a championship culture that is thriving, and have lit the fuse for future success.

Stay tuned for the Division III NCAA Tournament 2023. Millikin will be there.