A Reflection on the Trump Era 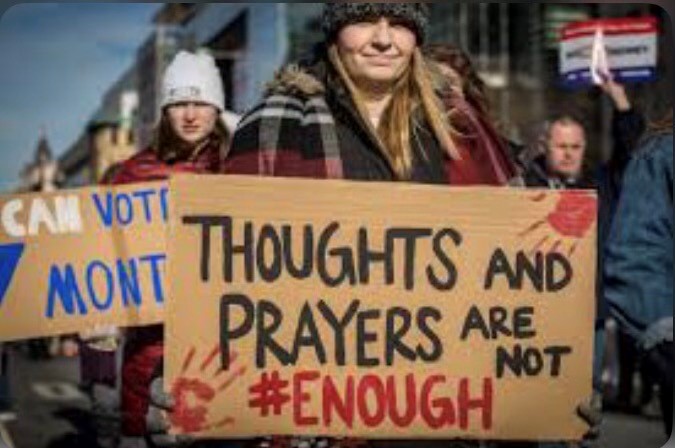 This moment—a global pandemic, social justice movements, insurrection at the U.S. Capitol—will go down in history books, and so will Donald Trump’s shameful legacy. As we prepare for Joe Biden to take office, it’s tempting to celebrate.

But our country is far from cured.

His administration has only added more cracks to a system that was already broken. Over the last four years, we have seen all of the lies that we’ve been taught about America come toppling down.

We live in one of the richest countries in the world, but as COVID-19 surged and the world locked down, we discovered that most people are living paycheck to paycheck—and then we didn’t provide the stimulus packages that Americans needed to stay afloat. We’ve been listening to debates about healthcare while people die because they can’t afford life-saving medicine and procedures. This summer, we watched the televised murder of a Black man and then weeks of protests and people fighting for their lives, against which America’s cops violently retaliated.

And that’s all in the past year. During Trump’s administration, we’ve also seen kids organize the March for Our Lives movement after 17 high school students were murdered in Parkland, FL; and we watched our politicians fail to respond. We saw a desperate fight to salvage abortion rights; and we just swore in a Supreme Court justice who threatens these rights every day she’s on the bench. The #MeToo movement surged in 2017; and then in 2018 one of the most publicized sexual assault hearings in U.S. history ended with Brett Kavanaugh joining the Supreme Court. Every few weeks, we learn the name of another Black person who was shot by police; and we watch these police officers get acquitted.

These are the moments that fill our history books. It is a disgusting legacy for Trump to carry.

But while Trump and other politicians who are leaving this year contributed to our country’s problems, the issues don’t start and end with them. Trump encouraged bigotry and nationalism, but these sicknesses existed in the U.S. long before he took office.

Just like the pandemic didn’t go away on Jan. 1, the hatred in this country won’t disappear on Jan. 21.

Trump received over 74 million votes. These voters are our neighbors, friends, loved ones. These voters are people for whom the injustices of the past four years were not dealbreakers. The lack of empathy—the “every man for himself” mentality—the tendency to fear or even hate that which you don’t understand—the blind devotion to ideals that haven’t really existed in our country for decades: These are deep-seated problems in America. While it’s nice to think that these problems could improve as soon as Trump leaves office, that’s not the reality.

The only way to combat America’s problems is to challenge them.

Most of us have been taught that America is the greatest country in the world. Whether you believe that or not, the fact is that we have a lot of work to do before we can be proud of this country. We need to challenge the belief that America is great, and we need to rethink the biases and false ideals that have been instilled in us.

Most Americans are numb. Frankly, it’s understandable; it’s impossible to be as outraged as we have the right to be all the time. When there is constant bad news and injustice—and when all of your energy is spent simply trying to keep yourself and your family fed and provided for—it becomes easier to hear about a shooting or an assault or an attempted coup and be sad…and then move on until the next one.

And no one is held accountable. No one is forced to rewrite a law or implement restrictions so that it never happens again. Tragedy becomes our default.

When you’re as exhausted as most Americans are, it’s really hard to fight for the systemic changes we need. And so these changes don’t come.

That exhaustion, that anger, is heavy. But it’s time to use our outrage to fuel us. Trump’s administration is ending, but we are gearing up for a bigger fight. Ultimately, Trump didn’t cause America’s hatred; he just revealed more of it. Now that he’s out of the White House, we need to refocus our energy on repairing our country.

Challenge the idea that America is the greatest country in the world. Notice its glaring flaws. And demand more, from yourself and your neighbors, friends, loved ones. From our politicians—including Joe Biden—who need to remember that they’re holding human lives in their hands. They need to do right by their voters.

And we voters need to do right by each other.

While we celebrate the end of the Trump administration, the Trump era and legacy continue. Only by recognizing that America is sick and actively challenging its broken systems will we be able to recover.

If we don’t continue to do that work even after Biden’s inauguration, then we’re complicit.