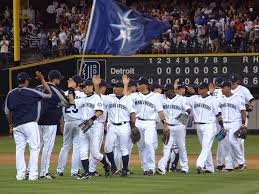 Jackie Robinson first broke baseball’s color barrier in 1947, a little under 75 years ago. He was the first of an influx of players who came from the Negro Leagues, to sign with Major League Baseball clubs. He played for the Brooklyn Dodgers from ’47 until his retirement in 1956. Upon his retirement, the League was comprised of 6.7% black players. The highest it had ever been at the time.

Flash forward to 2016. The percentage of black players in Major League Baseball? 6.7%.

After Jackie’s retirement, baseball did see a surge of black players make their way into the spotlight, as well as a large number of Latin American and Latino players become stars. The number of black players steadily rose until it peaked during the seasons of 1984-1986, sitting at 18.4%. Since then, however, that number has gone further and further down to this very day. In 2020, 7.8% of players in the Major Leagues are black.

There are a myriad of current factors that lead to this current problem, and many more reasons that have been issues since Robinson’s era. The first of which is the perception of the game. Baseball is an overwhelmingly white game. As of 2016, the game was comprised of about 64% white players. Baseball is not the “cool” game for kids to want to play in large part due to its “unwritten rules.” These rules are, in essence, built around showing respect for elder veteran players and earning your keep around the league… in theory. However, the real reason these rules were in place was to target younger players, especially players of color. It was a way to keep black and Latin American culture out of baseball, and suppress their identity, by not allowing these players to express themselves in any way. For instance, a black player homers, and the pitcher perceived him to drop the bat in a way that showed him up. That batter would have a baseball coming at his head next time he stepped in the box. Now, these unwritten rules are being dismantled. Black and Latino players are being themselves, and headlining a movement called “Let the Kids Play,” embodied by Tim Anderson and Fernando Tatis Jr. While baseball has lost so many players to basketball, football, and other sports due to the fact that they could not be themselves and had no fun playing the game, the sport is finally waking up and becoming what it could be once these stupid policing methods were gone.

Another problem that also affects white players is the harsh world of minor league baseball. Players in the minor leagues are paid annually less than that of a McDonald’s drive thru worker, oftentimes having to take second jobs in the offseason to support themselves. This is a huge reason why players retire before ever stepping foot in the major leagues. The cost to train and keep yourself ready to compete against the highest level talent in the world is not small, not to mention the cost to live in certain regions of the country. This disproportionately affects players of color who often do not have the financial means to keep playing despite having the talent.

A third problem that only makes the above mentioned situation worse is the fact that many black and low income players are not able to afford college, and have to enter the minor league system. Current NCAA rules further this problem by not allowing universities to offer scholarships to players like they do for football and basketball. While football can offer full ride scholarships to players for them to only redshirt that year, getting a full ride for baseball is unheard of. Schools are allotted 11.7 full ride scholarships worth of money to divide among 30-40+ players. Players who are fortunate enough to earn a scholarship are then left to still pay a ton to these schools they play for, forcing them to take whatever money they can get if they are fortunate enough to be drafted out of high school. This means that if they do not make the big leagues, they’ll be forced to retire with no college degree and little money, and the cycle continues.

The final problem is where it all begins. Youth baseball weeds out more lower income and black players than the aforementioned issues combined. For decades, players played for their local little league team, and then the legion teams over the summer in high school. That is no longer the case. Travel baseball, starting  at as young as 8 and 9 years old, is now the only way players can get seen. Companies now have sought to monetize this, charging outrageous costs for teams to enter tournaments, not to mention gas, hotel, and food costs to stay for the weekend wherever the tournament may be. Parents often have to take off work to take their kids to these tournaments as some of them start on Thursday or Friday during the day. These tournaments will then charge up to $40 per weekend at the gate for parents to even enter to watch their kids play. The costs go higher and higher as kids get older.

The simple fact is many players and their families can’t afford these insane costs, leading kids to pick other sports where low income players have the same chance as kids who come from money, like football and basketball.