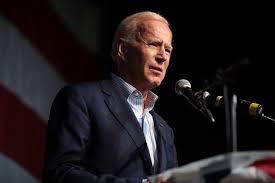 To Tara Reade, I want to say I’m sorry. Because I believe her, and I’m going to vote for Joe Biden anyway.

Reade made headlines a few months ago by alleging that Biden sexually assaulted her in 1993 when she worked as a staff assistant in his Senate office. Several women have been vocal about Biden’s inappropriate touching, but Reade remains the only person to accuse him of assault.

As usually happens when someone speaks up about sexual misconduct, Reade was immediately attacked. People speculated on what she hoped to gain from coming forward. They questioned why she had waited so long to say anything. They dug into her background, her personal life, and her qualifications. They called her a liar.

Biden denied Reade’s accusation and went on to become the official Democratic nominee, and Reade was left trying to convince the country that she’s telling the truth. A lot of people have disregarded her accusation altogether.

But even the people who believe her seem unsure what to do about it.

For a lot of liberals, Reade’s accusation forced them to confront their own morals. Most people have black-and-white ideas about sexual assault – namely, that anyone who commits assault is a terrible human being. This is true. But in an election where lives are at risk and the country seems poised to tumble over the ledge into fascism, Biden has thrown us into a world of gray.

In a lot of ways, politics boil down to our morals about how we should treat other people. Reade’s accusation pushed us to question these morals even more.

What can we overlook, and does it make us hypocritical to do so? What he did was bad, but is it okay to ignore it if the other guy is worse? Should we put aside the accusation against Biden to make sure he gets elected?

The push to “Vote Blue No Matter Who” pressured people to commit to Biden despite their concerns – and it also brought up questions of what we’re willing to ignore. A lot of people said that they couldn’t bring themselves to vote for Biden and compromise their values…and a lot of liberals called them selfish for it.

We’re inching closer to Election Day amid political unrest and voter suppression by our sitting president. Liberals have to decide once and for all if they’re going to cast a ballot and support a man who has been accused of doing one of the worst things you can do to another human being.

And even though it’s a complicated question, the short answer is yes, that’s exactly what we have to do.

Biden is not the perfect candidate by any means, but he will get us closer to our vision of what America should be. He has the potential to be a stepping stone to something better. We are in a precarious situation, and if nothing else, Biden could at least steady us until someone better runs for office in 2024.

So yes, we have to vote for Biden. Lives are at risk.

The Me Too and Time’s Up movements prompted a national conversation about sexual misconduct, but the response to Reade’s accusation reveals how much work we still need to do. Again and again, we fail to believe women. We can’t only believe women when it’s convenient. We can’t only believe them when they’re flawless. We need to believe survivors when they come forward. Period.

This election also underscores the fact that men often face few consequences for sexual misconduct. Brett Kavanaugh is a Supreme Court judge. Biden received the Democratic nomination. Trump himself has been accused of sexual misconduct by at least 25 women, and he’s our president. That’s abhorrent.

We need to change how we treat survivors of sexual assault. We need to believe them when they come forward. And we need to demand better from the men who hold power in our country.

So I’m going to vote for Joe Biden, and if you want to change the trajectory of the U.S., then you have to, too.

But Tara Reade, I’m sorry. I’m sorry that you experienced this, that you felt compelled to come forward, and that people decided you were lying.

And to the people in my life who are struggling with the decision to vote for Biden because it brings up difficult emotions or experiences for them, I’m sorry for that, too.

Come November, I will vote blue. I feel like that’s really the only option. It seems like it would be irresponsible not to. I’m going to vote for Joe Biden because I believe that he’s the candidate who could steady our country, who could at least make an effort to help the people I love.

But I believe Tara Reade. And I hope to God that this is the last election where I have to choose the best option between two sexual predators.