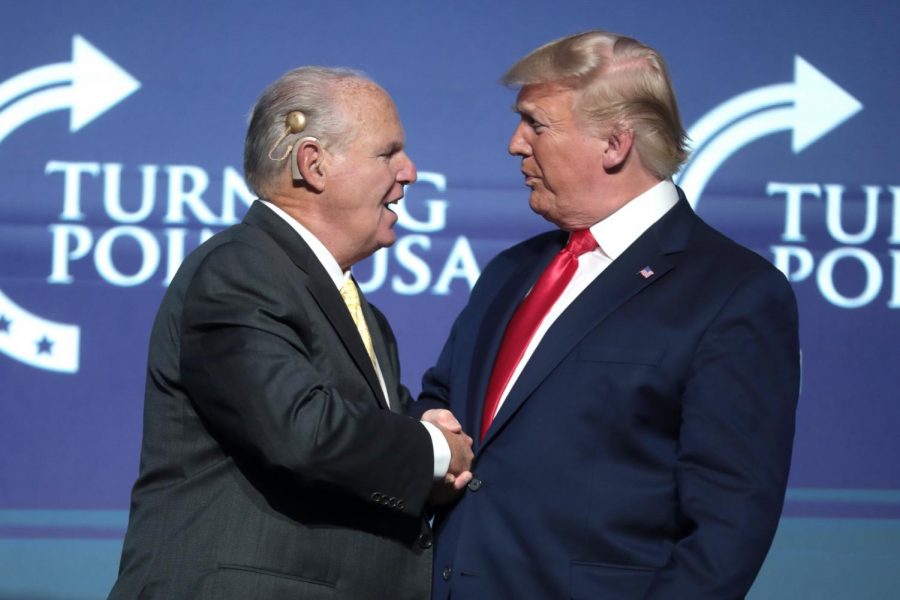 Like any State of the Union address in recent years, the 2020 State of the Union supplied various controversial events. From President Donald Trump refusing to shake Speaker of the House Nancy Pelosi’s hand, to Fred Guttenberg, father of Jamie Guttenberg- a Parkland shooting victim, being kicked out of the SOTU, to Speaker Pelosi ripping up the SOTU speech she was given.

On both sides of the political parties, the SOTU was full of political stunts and who could be the pettiest.

A more serious and controversial issue occurred, and it seems like Americans do not care and are not talking about it, or at least to the extent that it should be talked about.

A man who built his career around conspiracies and hate was awarded the Medal of Freedom. Of course, it is fitting that Donald Trump awarded a disgrace, Rush Limbaugh, the highest honor a citizen can receive.

Rush Limbaugh, is a right-wing talk-radio host with many controversial ideas and views.

In 1988, “The Rush Limbaugh Show” aired nationally by ABC Radio. The Show has been on-air for over three decades, spewing hate for all to hear.

Limbaugh targets people of color, women, feminist, and LGBTQ+ people. Essentially, if you are not a white, cisgender, straight male, Limbaugh desipes you and encourages others to feel the same.

The list of hateful and problematic quotes and stances from Limbaugh is never ending. Just to list a few things that have actually came out of this man’s mouth:

“It’s preposterous that Caucasians are blamed for slavery when they’ve done more to end it than any other race.”

“They’re (African-Americans) 12 percent of the population. Who the hell cares?”

He fed into the conspiracy of President Barack Obama not being born in this country. He also said that Oprah and Obama are only successful because they are black.

About sexism and feminism:

“Ladies, if you want a happy marriage, then do whatever your husband tells you without questioning his authority.”

“Feminism was established so that unattractive ugly broads could have early access to the mainstream.”

“If the left ever senses and smells that there’s no consent in part of the equation, then here come the rape police.”
He called a Georgetown Law student, Susan Fluke a “slut” and “prostitute” when Fluke argued before Congress for contraceptive coverage, specifically birth control,  under the Affordable Care Act. He also helped popularize the term “feminazi.”

“Hetrosexuals are “under assualt” by the two to five percent (of the population) that are homosexual.”

There are countless resources supply hundreds of bigoted quotes from Limbaugh.

Is Limbaugh in the position to judge others? Absolutely not. He has three ex wives and is currently on his fourth marriage, similar to Donald Trump and his inability to stay married to one or two women.

It seems as though many men in similar material situations such as Limbaugh and Trump are always the first to criticize others, using God and religion as a defense.

Ironically, the Bible disapproves of multiple marriages, but those like Trump and Limbaugh cherry-pick what matters in the Bible and what can be overlooked. Limbaugh also has a history of being a prescription drug addict.

So, who would have been a better fit to receive the Medal of Freedom award? The same award that has been given to trailblazers and activists such as Maya Angelou, Mother Teresea, Rosa Parks, Martin Luther King Jr., among others.

Literally almost anyone else besides Limbaugh.

Someone who is making the world, and more specifically our country, a better place.

The list could go on and on about who would have been a better choice for the award, but remember, Trump is the one who awarded it to a bigot, because he himself is a bigot. And hate is what drives Trump.