Kobe Bryant: Remembering All Aspects of His Life 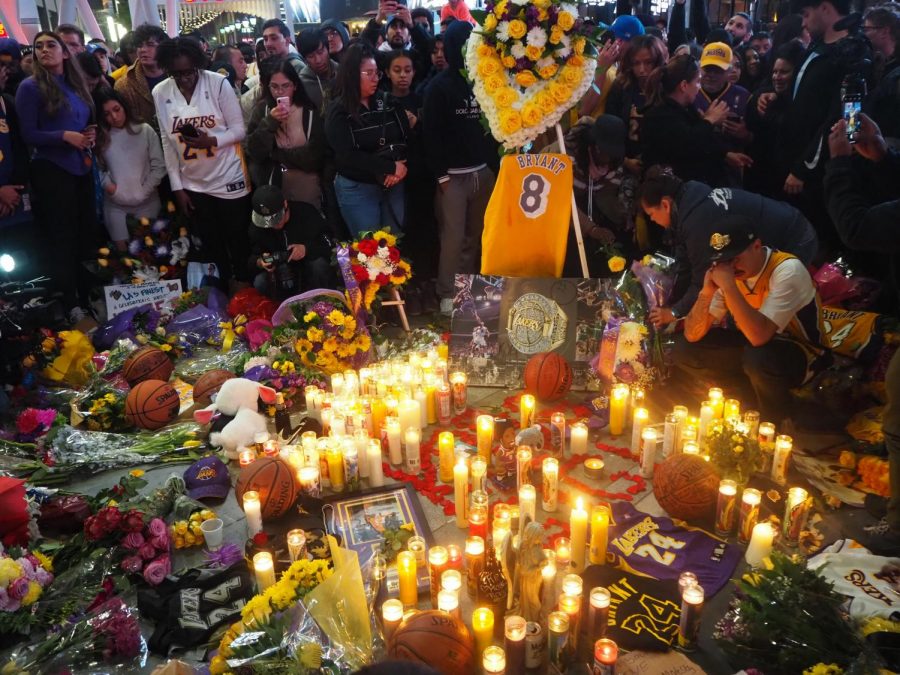 Kobe Bryant, undoubtedly one of the greatest athletes, and more specifically, basketball star, of all time. Whether you grew up watching him, admiring him, rooting against him, anything everything in-between, or you weren’t a sports fan at all, you knew who Kobe Bryant was.

Most of those who did not follow sports could even tell you the basics about him: what team he played on, what number he was, and that he was a helluva NBA player.

The yellow and purple Lakers jersey with the number 24 on the back has been one of the most recognizable and popular jerseys in NBA history. Everyone knew who he was. And of course, whenever you would shoot a paper ball into the trash can, you have to yell “Kobe!” This has been an unwritten rule, since I was a kid in elementary school.

Early last Sunday afternoon, news broke that the five-time NBA Championship winner had died. This news spread like wildfire. TMZ broke the news on Twitter, and people were, rightfully so, skeptical to trust TMZ. Not long after, bigger and more reliable media organizations and journalists confirmed the death of the NBA star.

This was unreal. Kobe Bryant died? He was so young and so talented, how the hell did this happen? Soon, rumors spread on social media that his 13-year-old daughter, Gianna, had also died. Kobe and Gianna Bryant were among seven others who also died in the helicopter crash. John Altobelli, Keri Altobelli, Alyssa Altobelli, Christina Mauser, Ara Zobayan, Sarah Chester, and Payton Chester also lost their young lives.

It has been almost one week since Kobe’s death and my social media is still filled with Kobe Bryant content, from nearly everyone. People loved him. They took his death personally.

Whether they are professional, college, or high school basketball players, basketball fans, sports commentators, celebrities, someone you grew up with, have class with, work with, or just your regular Joe Shmoe, everyone has been talking about Bryant. The majority of everyone’s social media feeds still revolves around him.

Social media has been a way for people to connect and share their stories about the basketball star. We have been looking for closeness and solidarity with others through our social media. However, not everyone has shared the same experience with the star’s death.

In 2003, Kobe Bryant was charged with sexually assaulting a 19-year-old woman. The woman was employed at the Lodge and Spa at Cordillera in Edwards, Colorado, a hotel Bryant was staying at in early July.

At first, Bryant denied the relationship between him and his accuser, claiming he did not have sex with the woman. Shortly after, officers informed Bryant that the woman had taken an exam that had physical evidence against Bryant, including semen. Bryant then admitted to having sexual intercourse with the woman, but claimed that the sex was consensual.

The woman had a bruise on her neck and tears in her vaginal wall. Her underwear, as well as Bryant’s shirt had blood stains from the rape.

A few days after the rape, Bryant was arrested, but released on a $25,000 bond. Bryant’s trial began that following December, and ended in September 2004. After an almost year-long trial, Eagle County District Judge Terry Ruckriegle dismissed the charges against Bryant after his accuser stated that she was unwilling to testify in court.

However, in August 2004, the woman filed a civil lawsuit against Bryant. Months later, in March 2005, Bryant and his accuser settled the lawsuit. Although the terms of the settlement were not disclosed to the public, “The Los Angeles Times” reported that legal experts estimated that the settlement was more that $2.5 million.

Honestly, I have been conflicted on what to think about Kobe Bryant’s life and legacy.

I am not trying to take away from Bryant’s hard work and what he accomplished during his short life. I acknowledge Bryant’s accomplishments and work on and off the court. However, it seems hypocritical to forget or pretend he did not rape a woman.

Since the rape, I think it is fair to say he has worked to redeem himself. However, it is not my place or yours to say if he is forgiven for what he has done; only his accuser can do so.

“Time Magazine” writer Evette Dionne recently wrote an article, similar to mine, titled “We Can Only Process Kobe Bryant’s Death by Being Honest about his Life.” Dionne ends her article with this:

“What we can do is complicate these conversations so we can usher in more honesty about who’s elevated in the aftermath of a sexual assault and how fame and money insulate perpetrators from being brought to account. We can do this while still acknowledging that Bryant didn’t deserve to die in such a manner at such an age and that people who loved him are grieving.”