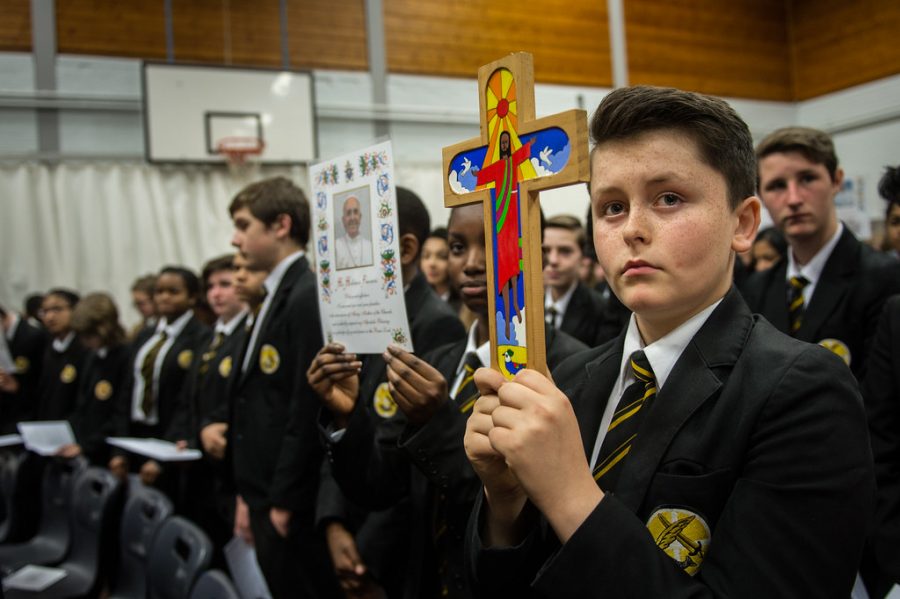 The other day at work, cantoring (singing) at Our Lady of Lourdes, I heard the pastor mention something in his homily about some Democratic candidates calling on banning Catholic schools as a part of their campaign because they promote racism. He didn’t mention the candidate(s) by name or where he got his information from. He only said the congregation should be proud of their faith and stand strong.

It was so shocking that I had to look up what he was claiming. The closest I got was a Catholic news article mentioning how Elizabeth Warren and Bernie Sanders want to limit funding for charter schools.

While I haven’t found much to support these claims made by the pastor, his sermon did bring up a few good questions. Is Catholic schooling toxic? Does Catholic schooling promote racism? For a better understanding, it helps to witness how Catholics function.

Catholics are many things. I should know; I grew up in a Catholic household. Racist shouldn’t be one of their key qualities.

A common trait I have noticed is that some Catholics tend to be judge-y types of people, and I’d be lying if I said I couldn’t see why.

There were times after Mass where I overheard people complaining about the two kids fidgeting around during the whole thing. They would say things like, “I guess someone’s never heard of the crying room (the place where parents with small children go to celebrate Mass without interrupting the service).”

Don’t get me wrong, I don’t like kids’ crying interrupting anything as much as the next guy, but at the same time, didn’t Jesus say to his disciples, “Let the children come to me”? I don’t remember anyone telling me about crying rooms existing in Jesus’s time. Besides, maybe the crying room was crowded that day, or maybe they were new and didn’t know where the crying room was.

But even ignoring that, that’s how some congregation members react to crying children disrupting Mass. What about how they treat their other neighbors, especially those of other races besides white/Caucasian? That’s not to say all Catholics are racist, but at the same time, people need to be respectful.

Catholic schools aren’t a breeding ground for racism, and they shouldn’t be. But at the same time, maybe they can be.

You can say you have people of all races and ethnicities show up at your doorstep, but the real question is, how well do you know them as people? Now, I’m not the best people-person, but I do know I want to treat people the way I would want to be treated: with respect and dignity.

Before you say you’re proud of your faith, it might help to take a look at what you’re doing and how you’re best representing those values that your faith is promoting. So, what do Catholics believe in?

According to the Nicene Creed, Catholics believe in One God, the Father Almighty, Jesus, God’s only begotten Son, and the Holy Spirit, who is adored and glorified with the Father and the Son.

According to the Sacrament of Confirmation, part of the Catholic belief includes the gifts of the Holy Spirit, which include, among other things, counsel, understanding, piety, and fortitude.

And Jesus told his disciples and the Pharisees that the most important commandment to know and follow is, “Love thy neighbor as yourself.”

And that’s just to name a few.

But what you know isn’t the real question. It’s what you do with what you know that’s going to matter.      There’s a saying that people should take more to heart. And that phrase? “A few bad apples spoil the barrel.”

How well are you using the gift of understanding? How well are you treating your neighbor? If Catholics asked themselves questions like these on a regular basis, it might give their community as a whole a new and better light (and even then, it would only be a start for self-improvement).

For what it’s worth, banning Catholic schools is a little excessive to tackle racism. My parents and their families grew up having Catholic education. I had Catholic education throughout middle and high school. I made a lot of friends there, and I still keep in touch with a few of them to this day. And yes, I did have black, Hispanic, and/or Latinx classmates who were treated with respect and kindness.

A better way to tackle problems such as racism, especially in a religious establishment, requires a little self-reflection. It shouldn’t hurt too hard for some people to check their white privilege every now and again. It also shouldn’t be too tedious to take the time to know and respect your neighbor.