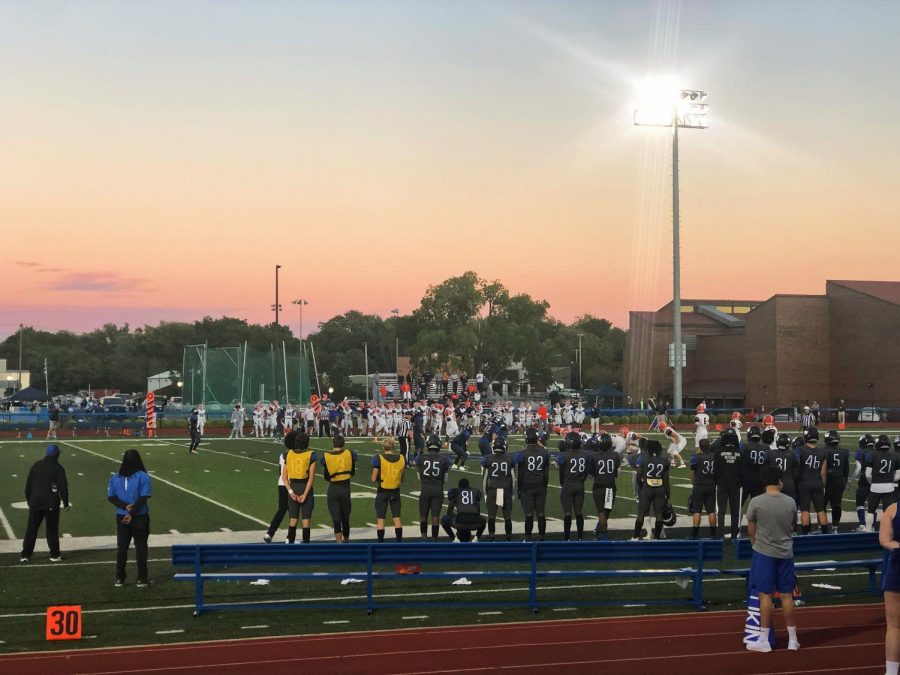 On Saturday night the Millikin football team followed up a thrilling 27-21 overtime win over Augustana with their second win in a row, this time beating Carroll and former Millikin offensive coordinator turned Carroll head coach Mike Budziszewski, in the home opener by a score of 32-25.

After Carroll scored on the opening drive, the Big Blue scored 13 unanswered points to take a 13-7 lead into the half. 2 breakout performances on offense, and the defense holding Carroll scoreless in the 4th quarter would be enough to push Millikin to a victory over the Pioneers.

After missing last week’s game against Augustana, Marion McGhee stole the show Saturday night. The Murfreesboro, Tennessee native ran for 5 touchdowns and 89 yards on 21 carries, as well as a 9-yard reception. What was most notable was how he scored them. The 5’6, 180-pound back could have easily been swallowed up in the backfield on multiple occasions, but pushed through arm tackles and got into the end zone on the 2nd attempt.

Tyson Roedl and Cal Pohrte also chipped in 52 yards on the ground between them, bringing the total to 133 yards on the game. The run game as a whole has been impressive over the last 2 weeks, going for a total of 300 yards and 7 touchdowns combined.

Winning the line of scrimmage

The Big Blue are finding success in large part due to controlling the line of scrimmage. Millikin’s veteran offensive line showed up huge against Carroll. Not only did they create holes for McGhee, but the unit did not allow a single sack, and only allowed 2 tackles for a loss, for a total of just 4 yards.

On the defensive side of the ball, the line is also causing havoc. The group went off for 7 TFL’s, 4 sacks and forced a fumble that would ultimately be recovered by Carroll. Quinton Miller had a game to remember with 2.5 of those sacks by himself, and 3.5 TFL’s. Alexander Perkins had 7 total tackles on the day, combined with Miller for a half sack, and forced the previously mentioned fumble. Also of note, the defensive front continued dominating in preventing the run. A week after holding Augustana to just 66 rushing yards as a team, they doubled down on that performance, holding Carroll running backs Nick Legnaioli and Isaac Allen to a combined 23 yards on the ground over 12 carries.

Jahlil Lipkin had the best game of his collegiate career this week, catching 8 passes for 160 yards, including a 51-yard bomb in the 3rd quarter that set up one of McGhee’s 5 touchdowns. While it’s usually Colton Lockwood heading the passing game in Millikin’s receiving corps, Lipkin was by far the most productive of the unit in this game, with 3 more catches and 113 more yards than the next closest option, junior Donald McGhee.

Lipkin’s season is trending in the right direction and could be a positive sign of a breakout. The Inglewood, CA native had a total of just 6 receptions for 86 yards in 2 seasons at Moorpark CC before joining the Big Blue, but has now steadily increased production in each of his 3 games, from 4 catches/49 yards week 1, to 6 catches/76 yards week 2, to the huge game this week. He appears to be making big strides in his first year at Millikin under head coach Dan Gritti.

After turning the ball over 11 times through the first 2 games, the Big Blue only coughed it up 1 time in this week’s win, with the lone turnover coming on a Cal Pohrte fumble came on the first play of the 2nd half. In addition, after only forcing 4 turnovers through weeks 1 and 2, the defense caused 3 turnovers this week, including a 4th-quarter interception with just under 6 ½ minutes to play in the contest. With Millikin winning by just 1 score, not giving Carroll free possessions very well could have been the difference in a win or loss.

This latest win puts Millikin at 2-1overall, and not just in the upper half of the CCIW, but tied with North Central, Carthage, and Wash U at 2-0 in conference play. This week is homecoming for the Big Blue, and they will be taking on a Carthage team looking to go to ride a bit of momentum themselves. Week 1 saw the Firebirds get thumped on the road at UW-Whitewater, currently ranked #3 in the nation. Carthage bounced back in week 2, with a decisive 34-17 win against Elmhurst, then followed it up with a 62-35 beating of Illinois Wesleyan. After what was an embarrassing week 1, the Firebirds have kicked it into gear entering the conference season, and will be led by reigning CCIW Player of the Week, quarterback Bryce Lowe. The freshman was one of 3 quarterbacks to play in the loss to UW-Whitewater, but showed enough in the win against Elmhurst to earn the start against Wesleyan, and took advantage, throwing for 301 yards and 4 touchdowns.

The Firebirds have also run the ball well over the last 2 weeks, something the Millikin defense will be sure to key in on, and continue the trend of being a tough run defense.

Elsewhere in the CCIW, 2 conference powerhouses go head to head as #5 Wheaton takes on Wash U, and Carroll will look to play spoiler as they host the #1 team in the nation, North Central. In the cellar of the standings, Elmhurst and Illinois Wesleyan (both 0-3) play in Bloomington, and Augustana (1-2) hosts 0-3 North Park.