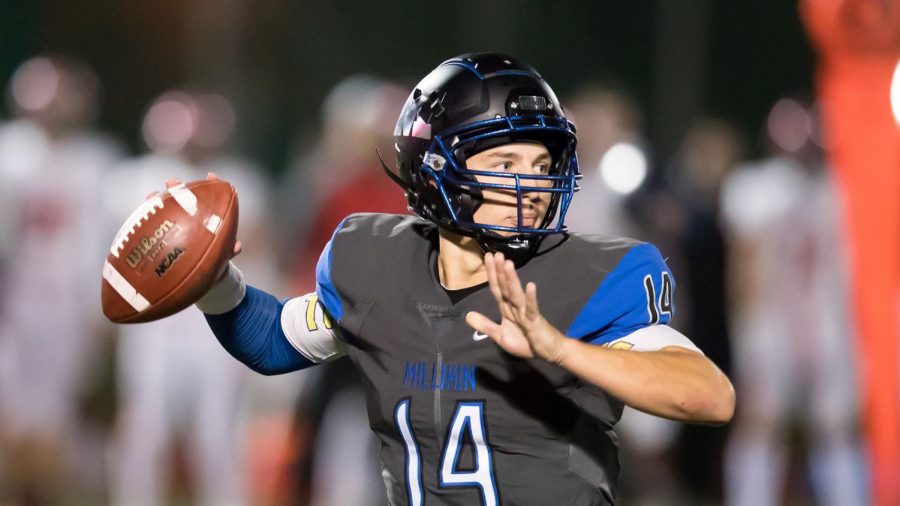 The Millikin football team dropped their season opener September 4th at Greenville University in a heartbreaker, as the Panthers scored the game-winning touchdown with just 30 seconds remaining en route to a 37-33 win. This is also both the first time Millikin has lost a season opener and the first time they’ve lost to Greenville since 2013, when the Big Blue started the season with a 48-41defeat, and finished the year 2-8.

The Big Blue went into the game looking to continue to build on what was a successful spring season, as well as some bright spots from the 2019 campaign. Coach Dan Gritti set his sights on his 2021 team ending the year with a winning record, despite playing in the gauntlet that is the CCIW. Hypothetically, this goal could have been achieved without beating any of the top 4 teams in the conference, and beating the other 6 teams on the schedule. Losing what was originally supposed to be a lock-it-in win against Greenville presents Millikin with a speedbump on their way to a winning record, as well as a new challenge: they must beat one of North Central, who beat #21 Aurora 64-7 last week, Wheaton, ranked #5 in the country, or Wash U or Illinois Wesleyan, the latter 2 being more likely.

The weather played a huge factor in the game, with swamp-like conditions contributing to 4 Millikin fumbles, fortunately getting it back twice.

Millikin also threw 2 interceptions in key moments in the game, as part of 4 turnovers in 5 drives, all ending in Greenville territory.

On the defensive side of the ball, not much went the Big Blue’s way. While they kept Millikin in the game and held their own while the offense stuttered, they couldn’t get the stops they needed at the ends of both halves.

It’s not all doom and gloom for the Big Blue. Any time you can put up 33 points, you’ve done something right. And, outside of the previously mentioned brutal 5-drive stretch, the offense performed when it needed to. Millikin put up 430 yards of total offense in the game and consistently found themselves within striking distance of the red zone and end zone. On top of that, 172 of the 430 yards came on the ground behind the veteran offensive line. Marion McGhee was just 1 shy of 100 yards on the game and found the end zone on an 8-yard score in the 2nd quarter. That same offensive line also did not allow a sack all day.

The Big Blue defense, however, registered 5 sacks as well as forcing 2 fumbles, recovering 1. They also halted the Panthers on 12 of 13 3rd downs.

Looking ahead, Millikin is looking to learn from the loss and move forward. “We were missing some guys that could’ve really helped us,” Gritti said. “We didn’t play well, we didn’t coach well… now hopefully we learn from it. We had the week off, and now we’re prepared to put a better performance on the field against Augustana.”

The days since Sept. 4th have given the Big Blue 2 weeks to work to get back on track and prepare for Augustana. “I’ve been very happy with how the team responded this week and last week at practice. They’ve come out with a lot of energy and they really want to be successful,” said Gritti.

What to expect v. Augustana

Augustana and Millikin will both be entering the game playing their first CCIW contest of the season. Augustana opened the season with a 31-21 victory over Rhodes College in Memphis, Tennessee. Of Augustana, Gritti said “they’re a well-coached, well-disciplined, smart football team. They’re not going to give us anything, we’re going to have to earn everything we get.” Augustana only committed 6 penalties in week 1, compared to a Greenville team that gave Millikin 10.

Augustana played 2 quarterbacks- sophomore Jason Grimes, and freshman Thomas Hall- in week 1, and are expected to do so again in week 2 against the Big Blue. Grimes started and saw more time than Hall, and was more successful doing so, completing 11 of 17 passes for 133 yards and 2 touchdowns, also pitching in 12 yards rushing.

On defense, the Vikings recorded 2 interceptions, a fumble recovery, and a sack while not allowing more than 1 single touchdown in any quarter, including a 2nd quarter goose egg.

Augie is beatable, however. While it is true they scored 31 points, all of them came in the first half as they were blanked by Rhodes in the final 2 quarters and were outscored 14-0 in the 2nd half. The Vikings also committed 5 turnovers, 4 of which came in their scoreless 2nd half.

If the Big Blue want to take own Augustana, they will do it by winning the turnover battle, this meaning they don’t turn the ball over themselves, and forcing Augustana into takeaway opportunities.

It will be family weekend at Augustana, something that will trigger a big crowd and a rowdy environment. Coach Gritti says his team is excited for the challenge ahead. “We’re gonna go out there and put a good effort on the field, and we’ll see what happens”