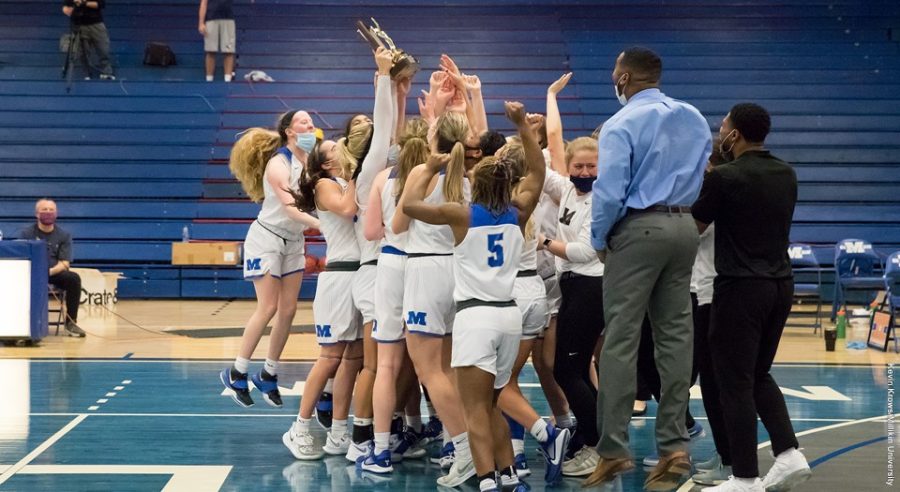 On Tuesday night, the Millikin Women’s Basketball Team defeated Illinois Wesleyan to capture its first CCIW conference title since 2005, and only the second in school history. And although there won’t be a national tournament to follow, Coach Olivia Lett and her team – most notably seniors Aubrey Magro and Jordan Hildebrand – will get to finish this season with a etch their names in the history books with a win over their arch-rival.

After the Big Blue put up 86 and 90 points against North Central and Carroll, respectively, this game was a low scoring affair to start. Shots were not falling for either team, and the game was tied at 15 after 1 quarter. The slow scoring would continue into the 2nd quarter, with Wesleyan taking a 29-26 lead into the half.

The teams would both start to break through as time went on in the third quarter, but Wesleyan still held onto the lead until Millikin finally took over with 2:05 left in the period and never looked back. Wesleyan kept it close, but the Big Blue would take a 46-43 lead into the final frame.

The back-and-forth contest was still up in the air halfway into the 4th quarter, with Millikin leading by 1 point with only 5 minutes to play. However, the Big Blue’s defense would help ignite a 13-3 Millikin run that ultimately sealed the deal, calling off a 2nd half in which MU outscored Wesleyan 46-30.

Even in a game where freshman guard Elyce Knudsen went off for 31 points and tied a CCIW record for field goals made, it might have been the Millikin defense that won them the game. Last time the Big Blue played Wesleyan back in February, it was the Titans’ Kendall Sosa who stole the show, putting up 47 points, going 13-29 from the field and knocking down all 18 of her free throws in an 81-72 win over the Big Blue. This time, Millikin made a concerted effort to slow down Sosa, and it worked. While she did score 20, the defense only put her at the line twice in the whole game, and held her to 2 of 7 from 3-point territory.

Senior forward Jordan Hildebrand also chipped in 15 points, which were part of Millikin’s 40 points scored in the paint. Sophomore Miranda Fox had 7 points, as well as a team-high 10 rebounds. The Millikin bench also outscored Wesleyan’s 19-4, and the Big Blue scored 10 second chance points to Wesleyan’s 3.

The win would have sent Millikin to the NCAA Tournament but the Big Blue will have to settle with a conference championship win over a rival. Millikin finished with an 11-3 record.